There have been just six prosecutions under the Sedition Act since it was introduced in 1938. A Bill was tabled in Parliament to repeal the Act. — TODAY pic
Follow us on Instagram, subscribe to our Telegram channel and browser alerts for the latest news you need to know.

SINGAPORE, Sept 14 — The Sedition Act, which criminalises conduct with seditious tendencies, might soon be repealed, as the Ministry of Home Affairs (MHA) said that it has “limited application” in Singapore yesterday.

A Bill was tabled in Parliament yesterday to repeal the Act, which was introduced in 1938 to address various forms of conduct that could weaken Singapore’s social fabric and undermine its institutions.

In a statement explaining why it was proposing to repeal the law, MHA said that new laws have been introduced in the years since, which deal with these concerns in a “more targeted and calibrated manner”.

However, one aspect of the Sedition Act, ensuring social cohesion between different groups within Singapore, continues to be relevant, it added.

And so, alongside the repeal of this Act, the Bill also proposes to amend the Penal Code to include these laws.

Since 1938, the Act has criminalised conduct that:

MHA noted that new laws have been introduced over the years to deal with many of these concerns in a more targeted and calibrated way. These include:

“Thus, the Sedition Act is of limited application and can be repealed,” MHA said in its statement.

Since its introduction in 1938, there have been six prosecutions under the Sedition Act, five of these taking place between 2005 and 2016.

The most recent prosecution, in 2016, took place when two editors of the now-defunct sociopolitical website The Real Singapore encouraged anti-foreigner sentiment through online posts. 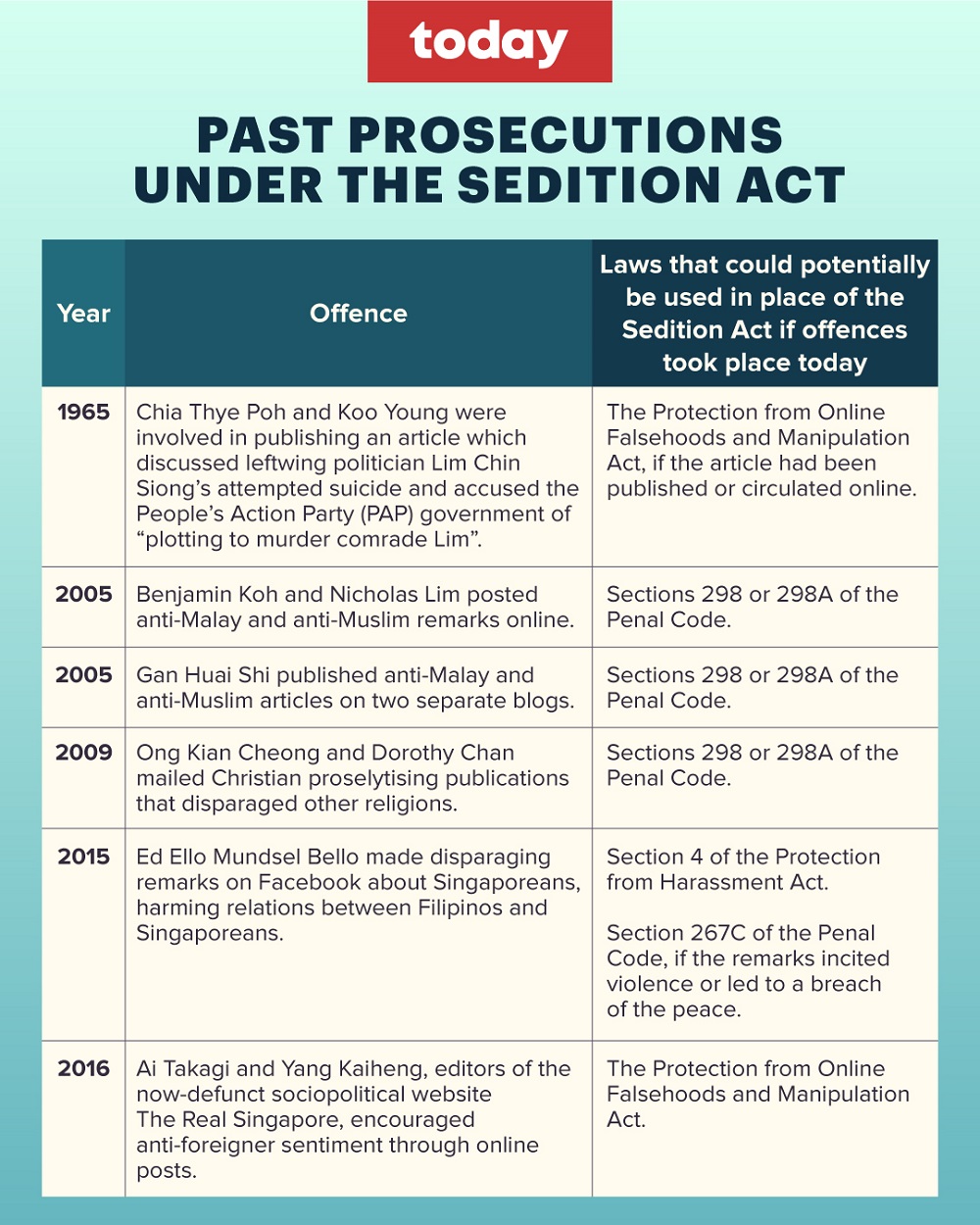 Changes to the Penal Code

The Penal Code will be amended so that it can continue to cover actions that affect cohesion between “different classes of the population” in Singapore that are not already covered by any of the newer laws.

For example, the Maintenance of Religious Harmony Act and Sections 298 and 298A of the Penal Code cover cases of disharmony involving religious and racial groups.

With the repeal of the Sedition Act, there is still a need to ensure that there are laws to deal with serious cases of disharmony involving other categories or groups, MHA said.

Thus, Section 267C of the Penal Code will be amended to raise the “threshold of culpability”, it added.

Presently, this section prohibits the making, possession or dissemination of material containing any incitement of violence against others, “counselling others to disobey the law”, or which is likely to lead to a breach of the peace.

MHA will amend the section to also cover acts such as speeches and other verbal communications that could lead to violence, disobedience to the law or a breach of peace.

It added that there will be an amendment to clarify that “counselling others to disobey the law” includes, but is not limited to, providing instruction, advice or information that promotes disobedience to the law.

Currently, under the section, it is an offence to make (by printing, for example), a document or electronic communication that:

MHA proposed that the scope of the section’s application be narrowed, to require that the offender “intended for the violence, disobedience to the law, or breach of the peace to occur, or knew or had reason to believe that these would likely occur”.

Changes to the criminal procedure code

A person can be arrested for offences under the Sedition Act. With its repeal, there is a need to ensure that the police can continue to act “swiftly and effectively when dealing with egregious cases that affect social cohesion”, MHA said.

Thus, the Criminal Procedure Code, which is part of the Penal Code, will also be amended to make the following offences arrestable:

MHA added that since the offences under section 267C are already arrestable, no further amendment is required for the section. — TODAY