Monday, 25 Apr 2022 7:32 AM MYT By Alwyn Lau
Follow us on Instagram, subscribe to our Telegram channel and browser alerts for the latest news you need to know.
By Alwyn Lau

APRIL 25 — The Minister of Health’s determination to pass a law in parliament to make it illegal for individuals born after 2005 to purchase tobacco products has predictably generated some controversy among smokers and non-smokers alike.

Khairy Jamaluddin himself has already admitted that even if the Bill passes in July, enforcement will not be a piece of cake.

I wish to confess up front that I feel strange writing this as I for one am strongly against smoking. My family has been anti-nicotine since I was young and I recall my parents even threatening to kick me out of the house if they ever found cigarettes on me—I never took up smoking at all (grin).

So why am I writing a piece against a smoking ban?

Well, I guess I’m not fully persuaded that a cold-turkey government mandate against something that is already so prevalent is the best way to stop said activity. Do blanket laws against popular products really work? How much of society obeys? 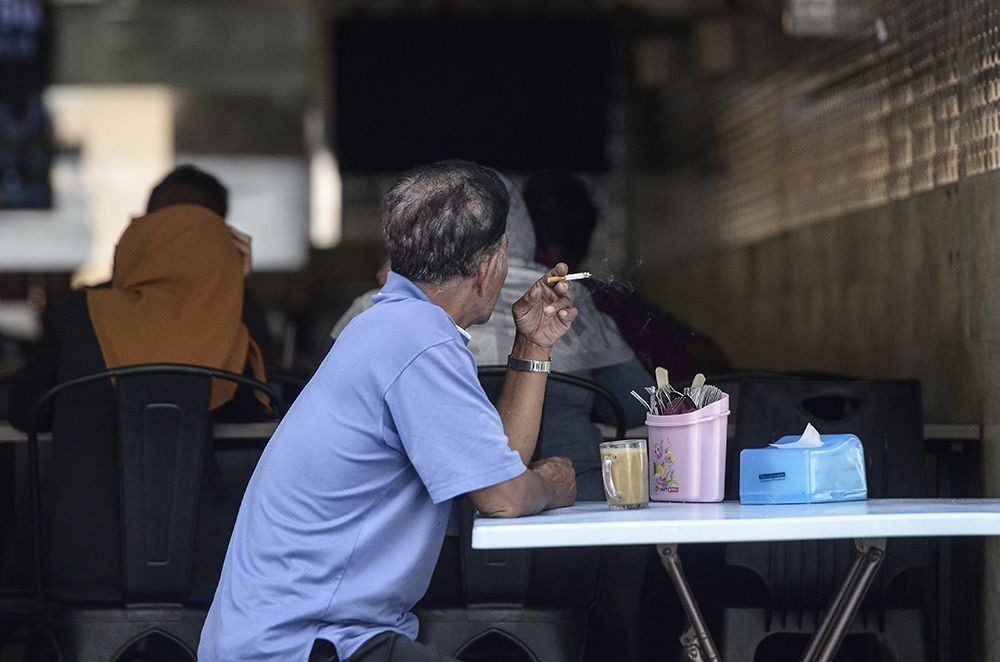 A man smokes outside an eatery in Petaling Jaya January 1, 2019. ― Picture by Miera Zulyana

I can almost hear thousands of 17-year-olds scheming and plotting to obtain contraband cigarettes, not exactly mission impossible given that our country tops the globe as a tobacco black market.

I am already seeing university kids laughing (while holding Marlboros between their fingers) because, phew, the law just missed them by a few years.

The other day I overheard one of my students jokingly say that he looks forward to earning some extra cash next year by selling some of his cancer-sticks to poor unfortunate 2005 babies. I suspect many others won’t be joking with such ideas.

The thing is, since when has banning something which has ALREADY been on the market ever been effective?

Fireworks. These have been prohibited for decades but I swear there are still some dudes regularly throwing fire air-bombs that go BOOM (!) outside my apartment at 2am on a bi-weekly basis.

Basikal lajak. Why are these activities still on-going, despite the high-profile court cases and the obvious (duh) carnage it can cause? Why can’t the police put an easy stop to these teenagers?

I’m obviously not suggesting that activities like basikal lajak should NOT be banned (they clearly should be!). I’m merely pointing out the (often gross) ineffectiveness of bans.

With cigarettes, the ban appears even more awkward because if you’re born before 2005 then lung cancer and blowing out second-hand smoke doesn’t matter, but if you’re born a year later then it does? What?

Also, and fatally, the new Bill to be introduced in July later this year doesn’t actually prohibit youngsters from smoking — it only says it’s illegal for people to sell cigarettes to them.

Basically, if the law can’t even stop teenagers from endangering their lives on the highway, how effective will the law be against teenagers secretly asking older friends to help them get fags?

A ban on smoking for 17-year-olds — while in principle a good thing —risks being a white elephant which not only distracts from more helpful approaches (eg, nation-wide educational campaigns, youth workshops on healthy lifestyles, co-operation with tobacco companies, partnerships with religions organisations, etc.), but may even stimulate the desire to get cigarettes because now it’s sort of illegal thereby making it “cooler” somehow.

Scandal and drama in the chess world

Borneo: Change is not loose change the West can spare