Into the dark with Haikal Idris

OCTOBER 11 — On September 19, a young man tweeted, ”Asking me to curate an account with 45k followers is like giving me access to a nuclear bomb.” And boy, was he right.

In the last couple weeks, Twitter users raged against a series of jokes many Malaysians labelled as “offensive.” Local stand-up comedian Haikal Idris had been given the task of curating @twt_malaysia, a Twitter account with over 46,000 followers, and he did what he did best: Made jokes.

The 25-year-old is best known for his dark humour (or otherwise known as black comedy), a comic style that is often viewed as offensive or cruel to some as it makes light of themes that are generally considered taboo or sensitive.

While the comedy scene is already used to Haikal’s shenanigans, Twitter wasn’t. He first joined the social media network in June 2016 and within a few weeks, his joke about Kelantan received so much backlash that he was invited on OhBulan and Astro Awani. 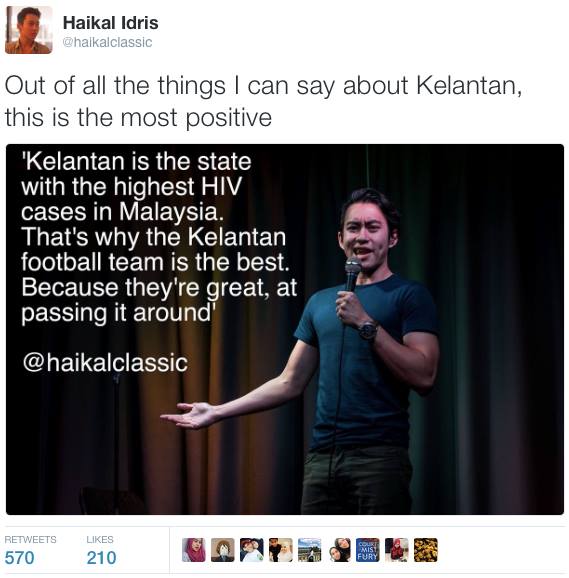 But Haikal isn’t just a stand-up comedian. By day, this Finance graduate is the head of Business Development and Investor Relations for ParkEasy, a Malaysian startup and smartphone application that helps you find parking quickly in shopping malls. After running a beta for several months, the application has now been officially launched and is available on both Apple App Store and Google Play Store.

Last Tuesday, I had the pleasure of watching Haikal and other local comedians “live” during One Mic Stand at PJ Live Arts. The next day, I had a sit-down with Haikal and asked him about his journey into comedy and his opinion about the negative reaction he received after a week of curating @twt_malaysia..

It all started three years ago when Haikal was hanging out with some comedian friends who encouraged him to take the stage. His first show was completely unstructured. He could have easily given up the first time, but when asked what motivated him to keep going, Haikal said that most comedians who are dedicated to the art form do so for the validation.

“A lot of us are lonely and we’re usually introverts,” he says, “so comedy is an outlet for us to take out our frustrations. It’s nice knowing that you can make people laugh.”

“Before I started (doing stand-up comedy), I was inspired by the usuals: Chris Rock, Ricky Gervais, Kat Williams, Dave Chappelle. But of course, right now, my biggest inspiration is Anthony Jeselnik.”

Jeselnik is an American comedian who is infamous for his dark comedy style which includes one-liners that have a sociopathic twist. “He taught me structure, like having a set-up and a punchline that completely changes it (the set-up),” And just like Jeselnik, Haikal too enjoys pushing the envelope on sensitive issues.

Ever since he was young, Haikal has been known for making inappropriate jokes. The more you’re not allowed to speak about it, the more he would instigate it. However, he is definitely aware of the consequences when he makes light of taboo topics.

“But why should you be offended on behalf of other people though?” Haikal asked. “Is it because you think they cannot stand up for themselves?”

According to Haikal, he’s had non-Muslims who got offended when he uses Islam as a premise for his jokes. “This was really puzzling to me, because I’m a Muslim, so why are you getting offended for me?”

“Ultra-liberals and ultra-conservatives are pretty much the same. Conservatives use religion to make themselves feel better than someone they deem as less religious, and liberals tend to attack those they perceive do not have the same moral standards as they do.” Haikal explained. “And right now, social media is the easiest form of validation for someone to try and prove that they hold a higher moral ground than other people.”

But where do we draw the line between “offensive” and “dark humour” in comedy? In Haikal’s own words, “When you’re on stage, anything goes. If you get offended at a comedy show, it’s your fault and not the comedian’s.”

However, sharing jokes on Twitter is unlike sharing jokes on stage; there is no set-up, no premise, and sometimes the punchline doesn’t hit. So how can we tell the difference between a joke and an offensive statement?

Referring to a tweet that he posted during his time as curator, “I never said the joke was about the Prophet and his wife. People made that connection themselves. But the fact that people got angry when I made jokes about child marriage, calling it an ‘insult’ to the religion, shows that we do have that problem (of practising child marriage).

“Satire, or jokes, are meant to be subtle. They make you feel like you should be offended, but you don’t know why you are offended because essentially there’s a certain truth to it. It leaves you confused. An offensive statement, on the other hand, is a personal attack on an individual or group and is meant to harm someone. It’s like a punch.”

The Taylor’s University alumnus knew that his joke about Kelantan would go viral because of how easy it is to push certain buttons in Malaysia. Haikal is used to making jokes like that on stage but this was the first time he uploaded it into a public space for the masses.

“I wanted to see their reactions,” he said, “and it was funny how so many people called me un-Islamic while hurling insults at me. I think that just shows the state of the religion in this country.”

A young woman from Kelantan wrote a response to Haikal’s joke and her defence of the state was shared by thousands of people. “Can you believe that? Someone actually wrote a long response to a joke!” Haikal said, flustered.

“Her response had really weak facts and sources but it was still shared by so many people. Do you know why?” He asked. “Because getting offended is the easiest option to justify your own narrative.”

“While I was curating @twt_malaysia, people tried to tell me that the HIV statistics have changed so someone presented a chart that looked like it was made on PowerPoint. There were so many people retweeting that even though it didn’t look legitimate at all and they started using it against me. Another person then gave me a trustworthy source to the statistics, so finally I accepted that I was wrong.”

“You see, that’s the problem with a lot of people. When they feel like someone says something that hurts their narrative, it’s so easy for them to believe anything that is weak or not true as long as it fits them. Not many put in the effort to find a credible source.”

Only within a few months of joining Twitter, Haikal had already been labelled a “liberal Muslim” due to his making light of religion. “What I want is not a more liberal Islam,” he says, “but an Islam where Muslims are able to think for themselves. Our education system teaches the refusal to think and understand, especially when it comes to things like faith.”

To people like Anthony Jeselnik, Ricky Gervais, Jimmy Carr, and even Haikal himself, it is foolish for anyone to get sensitive over comedy. “What is offensive to you might not always be offensive to other people and vice versa,” he explained.

This young man may be brash and reckless to many Malaysians. But in a country where thought crime is at its most critical, we need people like Haikal to unbind boundaries and leave no lines uncrossed. It takes a brave soul to walk into a lion’s den with no fear nor regret.

If you’re ever interested in checking out his set, Haikal frequently performs in One Mic Stand at PJ Live Arts on Tuesdays along with many other talented local comedians. Otherwise, you can always keep up-to-date with his witty tweets at @haikalclassic.