Ezra Zaid speaks to reporters at the Petaling Shariah Subordinate Court in Shah Alam December 17, 2020. — Picture by Miera Zulyana
Follow us on Instagram, subscribe to our Telegram channel and browser alerts for the latest news you need to know.
By IDA LIM

KUALA LUMPUR, June 3 ― The High Court today asked both Mohd Ezra Mohd Zaid and the Selangor Islamic Religious Department (Jais) to attempt to settle on the amount of compensation to be paid to him, over Jais’ past wrongful Shariah prosecution in relation to a book in Bahasa Malaysia published by his company.

Today was initially scheduled for the High Court’s hearing of assessment of damages, or to determine the amount of compensation that Jais should pay to Ezra.

Typically, a trial is done through the calling of witnesses, but the hearing in this case was previously directed to proceed based on affidavits.

Fahri explained that the hearing today however could not go on just based on affidavits that had been filed, as Jais was disputing the facts asserted by Ezra.

Fahri said the judge then gave two months for both parties to pursue efforts to settle the case.

The case is scheduled for case management on August 19, with Fahri saying: “It’s just a case management for us to update the court where we are, whether there is any possibility of us resolving this amicably. If not, we will proceed with trial.”

The court matter over how much Jais should compensate Ezra is the final outstanding matter in his long ordeal since May 2012, or about nine years ago.

How it all started

In May 2012, company ZI Publications Sdn Bhd had published the Malay-language translation of Irshad Manji’s book titled Allah, Liberty and Love, with Jais then on May 29, 2012 raiding and searching ZI Publications’ office and seizing 180 copies of the translated book Allah, Kebebasan dan Cinta from the office.

On March 7, 2013, Ezra was charged in the Shariah court in his capacity as ZI Publications’ director and shareholder, with the Shariah offence under a Selangor state law making it a crime for “any person” who publishes any book containing anything contrary to Islamic law.

The Shariah offence was punishable by a maximum fine of RM3,000 or a maximum two-year jail term or both, with the Shariah trial hanging over Ezra’s head and proceeding even amid his court challenges in the civil courts against the arrest and the Shariah trial.

On March 7, 2018, the High Court dismissed Ezra’s challenge against his arrest and prosecution in the Shariah court. Ezra then appeals to the Court of Appeal.

On September 25, 2019, the Court of Appeal’s three-man panel unanimously decided to grant a court order to quash Jais’ arrest of Ezra as well as the Shariah prosecution against him.

Among other things, the Court of Appeal had pointed out that a company is a separate entity from its shareholders, and that a company cannot profess a religion or assume the religion of its shareholders. It also noted that the Selangor state law ― which Ezra was charged under ― is only applicable to Muslims and did not expressly say companies can be charged for Shariah offences.

The Court of Appeal said Jais was wrong to prosecute Ezra and said it was clearly an attempt to overcome the legal inability to prosecute the company ZI Publications for a crime under the Selangor state law known as the Syariah Criminal Offences (Selangor) Enactment 1995.

On September 29, 2020, the Federal Court dismissed Jais’ bid for leave to appeal, which meant that the Court of Appeal’s September 2019 decision to quash Ezra’s arrest and prosecution and to order for compensation to be paid to him still stands.

As for the Shariah trial where at least seven prosecution witnesses had already testified, the Shariah prosecution had on December 10, 2020 applied for three court orders ― to partially release Ezra without acquitting him via a discharge not amounting to an acquittal (DNAA) order, and for the books to effectively not be returned to his company ZI Publications but to be forfeited and destroyed, and to block Ezra from talking about the case.

On December 17, 2020, the Shariah court decided to fully release Ezra from the trial by discharging and acquitting him, due to final decisions made by the civil courts via the Court of Appeal and Federal Court to quash the Shariah trial.

The judge allowed the Shariah prosecution’s application in terms of the books and ordered for all 180 copies of the BM translation of Allah, Liberty and Love to be forfeited and to be surrendered to Islamic religious enforcers to be destroyed, but rejected the application for Ezra or his agents to be prohibited from talking about the Shariah case. 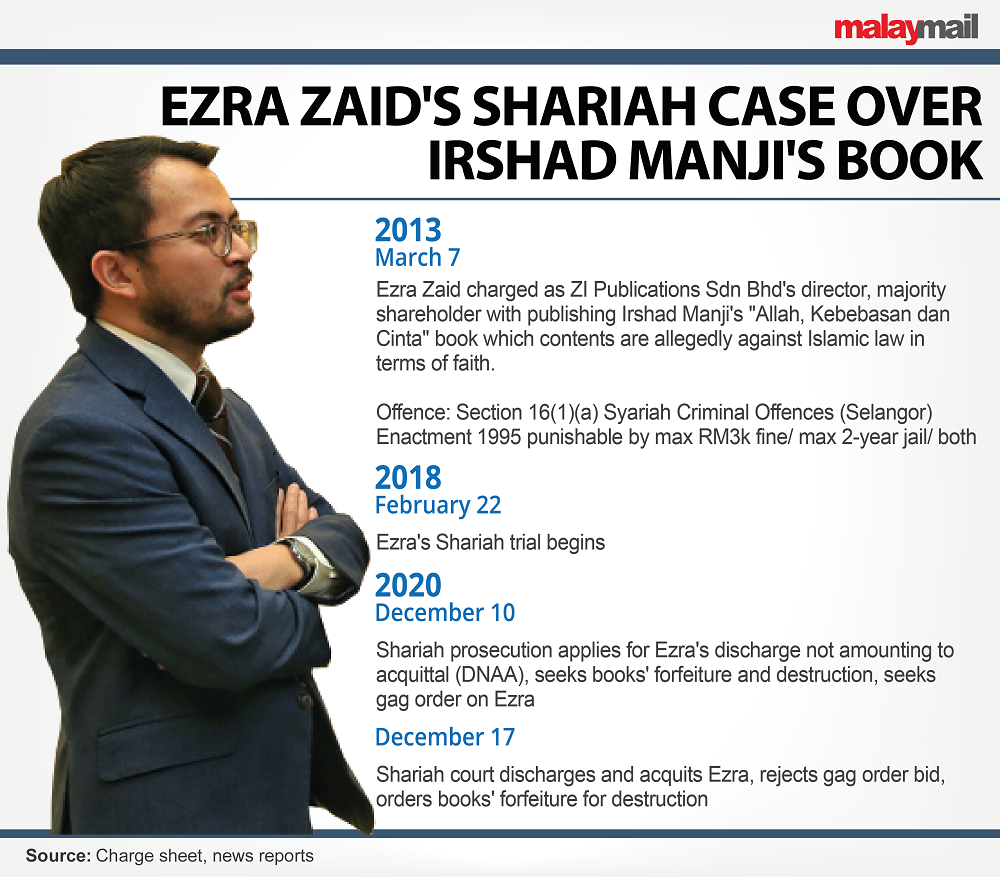