Govt fails to strike out Malaysian mothers’ lawsuit seeking citizenship for their overseas-born children, court asks for justification of discrimination

Members of Family Frontiers hold up placards demanding equal citizenship rights for Malaysians at the Kuala Lumpur High Court April 27, 2021. — Picture by Hari Anggara
Follow us on Instagram, subscribe to our Telegram channel and browser alerts for the latest news you need to know.
By IDA LIM

KUALA LUMPUR, May 6 — The Malaysian government today failed in its bid to have the courts throw out a lawsuit by several Malaysian mothers who want their children born abroad to automatically be Malaysian citizens.

Instead of striking out the lawsuit before it can be heard in court on its merits, the judge today decided that he will hear the case on substantive issues before ruling on it.

After having considered the arguments by both the government and the Malaysian mothers, the judge said he perceives the actual issue in the lawsuit to be about provisions in the Federal Constitution that were discriminatory.

The judge also said that there was clearly discrimination in Malaysia’s citizenship laws against Malaysian mothers, which he said the government has to justify in the lawsuit.

“In this matter before me, there is an apparent discrimination against the mother and father of the child, but there does not seem to be any apparent justification for such a discrimination and the non-justification becomes even more clear and even more glaring if you look at other provisions in the same Article for citizenship,” he said.

The judge today highlighted the apparent gender discrimination against Malaysian women in Section 1(b) and Section 1(c) which only mentioned “father”, as compared to Section 1(a) which mentioned “parents” and where a child born in Malaysia can automatically be a Malaysian if either the mother or father is a Malaysian.

“For children born in the federation, the citizenship is dependent on both parents, either one of the parents — mother or father,” he said of Section 1(a).

“And here, it says only the father, citizenship, so there appears to be no justification to it,” he said of Section 1(b) and Section 1(c).

“This is an issue which cannot be said to be frivolous,” the judge said when stressing the importance of the matter and in rejecting the government’s previous argument that the lawsuit was frivolous, vexatious and an abuse of court process.

“So in short, my decision is that I’m disallowing this defendant’s application to strike off, and I’m also making a ruling that the first plaintiff and the other plaintiffs have got locus for the relief that is asked for,” he said.

The judge said the government must now answer and provide reasons in court to justify the discrimination in the Federal Constitution’s citizenship laws against Malaysian women.

“What is the justification? And when I say justification, it does not mean just illusory justification, they must be supported by facts and figures. So for that purpose I’m giving the defendant three weeks to file an affidavit to explain justifications, only then the court would be able to decide on the validity of the provision or how it should be interpreted and read,” the judge said.

The judge said the Malaysian government has to file its affidavit by May 27, while the lawyers for Family Frontiers and the six Malaysian women are to file in their reply by June 10, with written submissions for both sides to be filed in by June 21.

The High Court also fixed June 30 for the hearing of the lawsuit on its merits.

The judge also allowed the Malaysian mothers’ application to add two more respondents to their lawsuit, namely the home minister and the National Registration Department director-general.

The lawyers holding watching brief today in this lawsuit are Mohd Ridhuan Md Kamal for the Malaysian Bar, and Jasmine Wong — who is acting for a client in a similar court case — for the Global Campaign for Equal Nationality Rights, the Institute on Statelessness and Inclusion, and Voice of the Children. On December 18, 2020, Family Frontiers via its president Suriani Kempe and the six other Malaysian women had filed the lawsuit via an originating summons, seeking six specific court orders including declarations that Section 1(b) and Section 1(c) are discriminatory and in violation of the Federal Constitution’s Article 8. Article 8 disallows gender discrimination in any law against Malaysian citizens.

They also want a declaration that Section 1(b) and Section 1(c) be read harmoniously with Article 8(2) to include Malaysian mothers as a condition for children born abroad to be given automatic Malaysian citizenship.

Currently, Malaysian mothers who are married to foreigners have to apply for their children born abroad to have Malaysian citizenship, a process that is said to typically take years before the Malaysian government responds and with no guarantee that the child would become a citizen as the government can reject such applications.

In comparison, Malaysian fathers would be able to confer their citizenship to children who are born abroad, which means they are automatically recognised as citizens and do not have to go through the same arduous process of applying for citizenship. 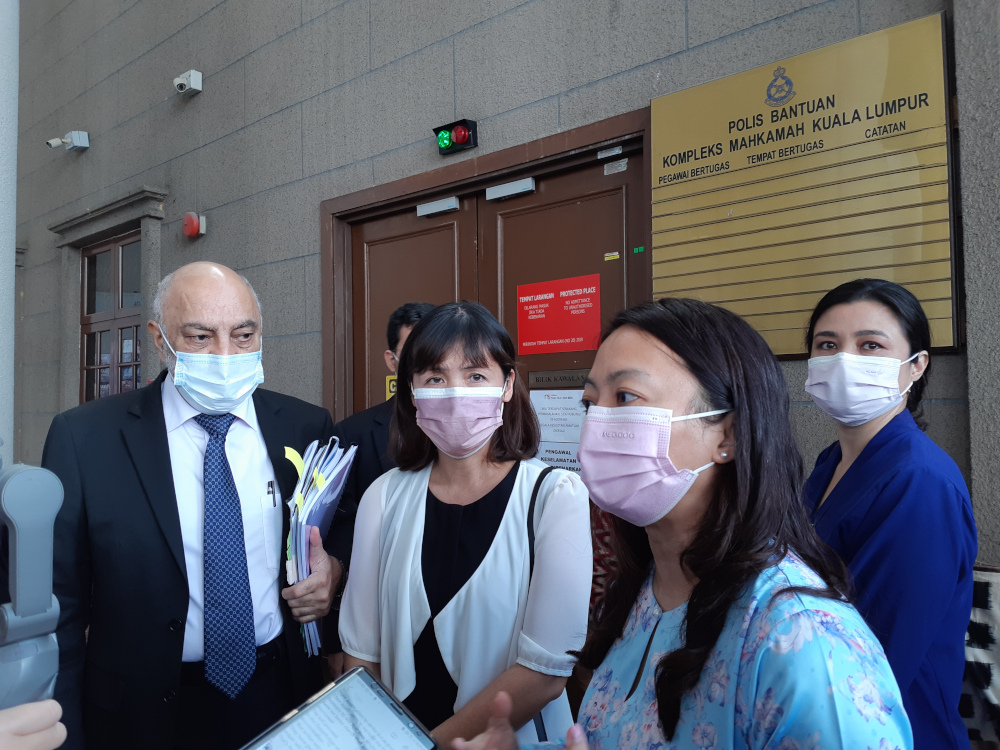 When met after the lawsuit, Family Frontiers president Suriani told reporters: “So Family Frontiers is of course very pleased with the decision and welcomes it, and we are very excited that Malaysian women’s voices will finally be heard in court on this issue. And we look forward to the day the court will hear the merits of the case.”

Suriani said Family Frontiers’ role in the lawsuit is to represent the collective experience of Malaysian women who are caught in a wide range of experiences, including those who are married to foreign spouses and whose overseas-born children are left stateless due to the current Malaysian citizenship laws.

Suriani noted that these Malaysian citizenship laws also affect such Malaysian mothers who are in Malaysia currently with their overseas-born children, but with even such children required to renew their visas during the Covid-19 pandemic period by travelling out of the country.

She said there are Malaysian women “whose six-year-old child has been asked to leave the country for a visa run during MCO”, before further noting: “A lot of this are uncompassionate responses to situations, especially during this pandemic, where you cannot ask a six-year-old child to make a visa run, to leave the country and come back on his own. So there’s a lot of cases like this which are captured by Family Frontiers’ representation in the case.”

Family Frontiers’ lawyer Gurdial explained that the idea that children born outside of Malaysia to Malaysian women would acquire their non-Malaysian fathers’ citizenship was “absolutely not true”, pointing out the laws of the fathers’ countries may not necessarily allow automatic citizenship to be passed on to the children.

Gurdial said that this would result in such children being stateless, pointing out as example that one of the Malay Muslim plaintiffs in this case who married a Chinese national and lived in China had faced difficulties in bringing her child back to Malaysia.

Gurdial said her child was stateless as the child did not acquire his father’s citizenship and as Malaysia’s citizenship laws did not allow the mother to pass on her citizenship to him, and that it was only after a long process that she managed to get some travel documents to travel back to Malaysia with the child instead of leaving the child behind in China.

“So these are the sad stories behind our case, critical stories, that I think the judge has recognised that there has to be a justification for this kind of situation. In this day and age, this century, you cannot allow a situation where you are throwing the child into the wilderness.

“There is no basis to have such a non-compassionate and almost brutal act against the child,” he said, noting that Malaysia has signed the international treaty known as the Convention on the Rights of the Child where the child’s best interests are paramount and of primary consideration.

Yeoh meanwhile urged for the Malaysian government to carry out reforms as there are Malaysian women with such pending citizenship applications for their overseas-born children, and with such children being affected by the non-recognition of themselves as Malaysians.

“I just want to say that while waiting for the hearing that is going to be in June, we are now faced with another MCO 3.0 and every day, there are applications like that that are affected. Every day there are children who are affected, who are missing school.

“So we ask that the Home Ministry, especially the home minister, should really place the family institution as a priority and not spend time politicking. Because every day that is wasted on issues like that to fix and to reform, a family is suffering out there and this affects, really, the wellbeing of our children,” she said.