“There are 30,475 active cases, with 196 patients being treated in intensive care and 92 requiring respiratory assistance,” he said in a statement today.

Dr Noor Hisham said Selangor for the third consecutive day detected the highest number of infections with 932, of which 579 were detected from clusters and close contact screenings.

No cases were recorded in Perlis.

On the 14 deaths reported today, the health director-general said 10 of the deaths occurred in Selangor, while the remaining was reported in Sarawak (2), Johor (1), and Sabah (1).

The victims were aged between 30 and 76. Eight of them were below the age of 65, including a 42-year-old in Sarawak and a 50-year-old in Selangor with no history of chronic illness.

He said four of the victims were already deceased when brought to a hospital.

On the clusters, Dr Noor Hisham said 13 new Covid-19 clusters were detected as of noon today, a majority of which are workplace-related.

He said currently there are 509 active clusters, of which 90 have recorded new cases including the 13 newly identified clusters.

Four clusters were recorded in Johor, three in Selangor, and two in Kuala Lumpur.

The Health Ministry also detected one cluster each in Negri Sembilan, Kedah, Sabah and Sarawak. 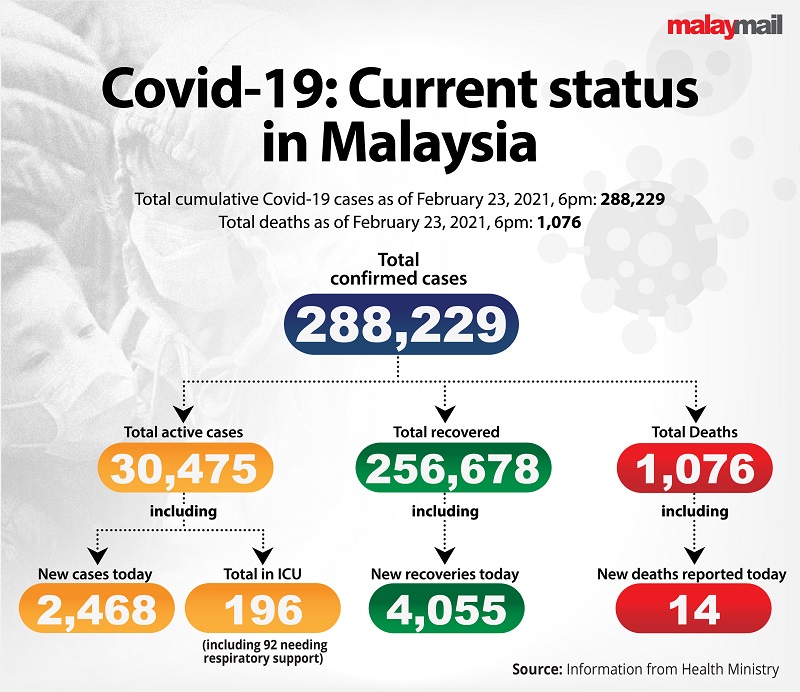