KUALA LUMPUR, Jan 27 — The number of lawsuits against the prime minister over the suspension of Parliament sittings during the Emergency has continued to grow.

Three lawmakers in Johor, Kedah and Perak from the Opposition coalition Pakatan Harapan (PH) yesterday joined forces to file a court challenge against him over the allegedly unconstitutional move.

This was just a day after Dewan Rakyat Opposition Leader Datuk Seri Anwar Ibrahim filed a lawsuit on Monday against Tan Sri Muhyiddin Yassin in his capacity as prime minister and the Malaysian government to challenge the suspension of Parliament during the Emergency,

They also want the courts to order the prime minister and the government to present the Emergency declaration and an Emergency law or ordinance in Parliament to be scrutinised by lawmakers.

Like Anwar, they have named Muhyiddin, in his capacity as prime minister, and the Malaysian government as the respondents of their lawsuit.

After filing their application for leave for judicial review at the High Court in Kuala Lumpur, the trio yesterday said that the lawsuit was intended to ask the court to review allegedly unconstitutional provisions in an Emergency law made earlier this month.

The law in question is the Emergency (Essential Powers) Ordinance 2021 which allowed for the suspension of Parliament and state assemblies during the Emergency.

“This application is also to enable the court to review the powers of the prime minister and the Cabinet and mentri besar/chief ministers and state excos which are said to not be able to be held accountable to Parliament/state legislative assemblies,” the trio said in their press statement yesterday.

Although the three lawmakers are from the three political parties that make up PH, Malay Mail understands that their lawsuit was not filed on behalf of the Opposition coalition, but in their individual capacity as federal and state lawmakers.

The Yang di-Pertuan Agong proclaimed a state of Emergency nationwide from January 11 to August 1, upon the Cabinet’s advice which was presented by Muhyiddin on January 11 to the Ruler.

The Emergency (Essential Powers) Ordinance 2021 — which among other things suspends Parliament and state legislative assemblies for as long as the country is in a state of Emergency — was gazetted on January 14 but took retrospective effect from January 11.

In their lawsuit, the three PH lawmakers are seeking nine court orders, including a court declaration that Sections 11, 14 and 15 of the 2021 Emergency Ordinance are invalid and of no legal effect — due to inconsistency and breaches of the Federal Constitution.

Section 11 provides for the prime minister and the federal Cabinet and the chief ministers and their state Cabinets to continue exercising their executive functions during the Emergency.

They also want the court to declare that Muhyiddin and the federal government are under constitutional duty via the Federal Constitution’s Article 150(3) to advise the Yang di-Pertuan Agong to summon a Parliament meeting, in order for both the Proclamation of Emergency and the 2021 Emergency Ordinance to be presented to the Dewan Rakyat and Dewan Negara for the necessary resolutions to be passed in line with the mandatory provisions of Article 150(3).

The three lawmakers also want the court to grant a mandamus order to direct Muhyiddin to place both the Proclamation of Emergency and the Emergency Ordinance before the Dewan Rakyat and Dewan Negara for resolutions to be passed in line with Article 150(3), or alternatively a mandamus order directing Muhyiddin to advise the Yang di-Pertuan Agong to summon a Parliament meeting to enable both the Emergency proclamation and ordinance to be placed before the two houses of Parliament — Dewan Rakyat and Dewan Negara.

Under Article 150(3), a Proclamation of Emergency and Emergency ordinances are required to be placed before both the Dewan Rakyat and Dewan Negara, which can pass resolutions to annul such proclamations or ordinances. The three lawmakers said that Parliament would then be able to scrutinise and decide whether to continue or annul such Emergency proclamations and ordinances. 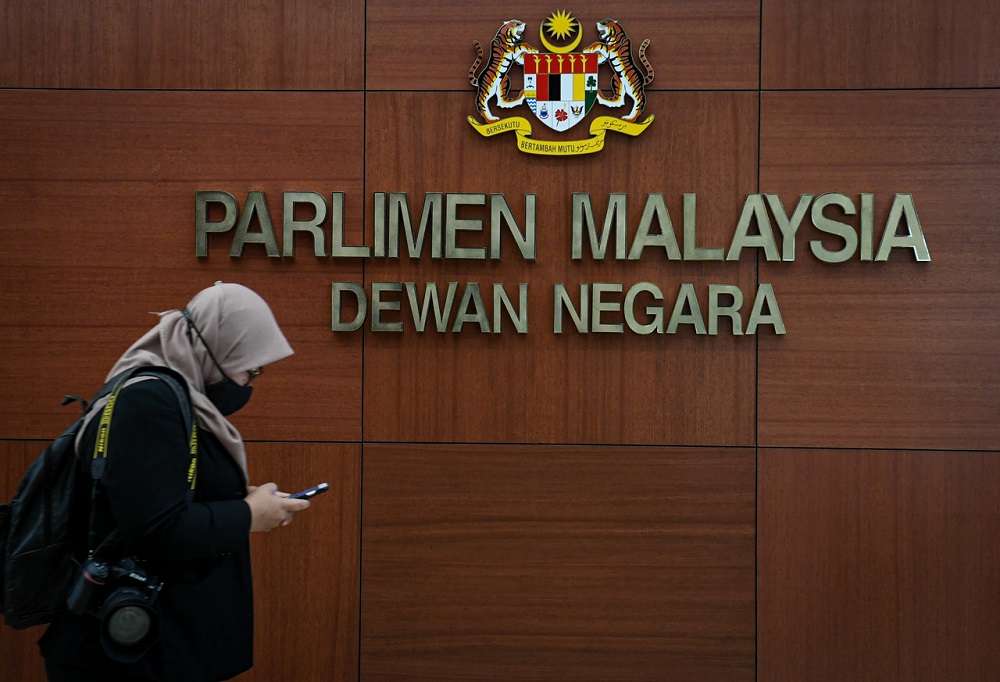 A general view of the Parliament lobby in Kuala Lumpur November 2, 2020. — Bernama pic

Reasons for the trio’s court challenge

In explaining why they were challenging Sections 11, 14 and 15 of the Emergency Ordinance, the three PH lawmakers in a court document said that these provisions were “unnecessary, irrational, unreasonable and disproportionate”, as the movement control order (MCO) and its variations (EMCO, CMCO, RMCO) and existing laws such as the Prevention and Control of Infectious Diseases Act are already sufficient to control the Covid-19 pandemic.

“The suspension of Dewan Rakyat and/or state legislative assemblies does not aid the purpose of containing the Covid-19 situation or pandemic,” they said, having also highlighted that there was no basis for such suspension when economic sectors are allowed to continue operations throughout the Emergency.

They argued that the suspension of Parliament and state legislative assemblies stops them from carrying out their constitutional functions of supervising and acting as a check and balance to the executive arm of the government, as the federal and state governments can exercise their executive functions without having to be accountable or to answer to Parliament and state legislative assemblies.

The three lawmakers argued that the combined effect of Sections 11, 14 and 15 is that there would be no check and balance to hold the prime minister and his Cabinet and the chief ministers and their state Cabinets accountable for how they exercise their powers during the Emergency.

Apart from seeking to restore the scrutiny of Parliament over the government’s actions during the Emergency, the three lawmakers also want a restoration of the courts’ powers to scrutinise the government when it comes to the Emergency and Emergency ordinances.

“The actions of the prime minister and/or the Cabinet, and the chief minister and/or the state Cabinet must always be subject to the scrutiny of the judiciary to avoid abuse of power, oppression by and arbitrariness of the government going unchecked,” they said. As of now, there are currently four lawsuits in the courts in relation to the Emergency, Emergency Ordinance and the Federal Constitution, but all with slightly different focuses or approaches.

In brief, Anwar’s lawsuit filed on January 25 is focused on cancelling the alleged unlawful advice by Muhyiddin and his Cabinet to the Yang di-Pertuan Agong to make the allegedly unconstitutional Section 14 provision in the Emergency Ordinance which suspended Parliament, and to have the courts compel Muhyiddin and the government to advise the Agong to revoke Section 14. Like the PH trio, he is also challenging constitutional provisions that stop the courts from deciding on the validity of Emergency laws.

Politician Datuk Seri Khairuddin Abu Hassan’s January 18 lawsuit filed against Muhyiddin and the Malaysian government focuses on asking the courts to decide whether a prime minister who no longer has the majority support of MPs in the Dewan Rakyat can still advise the Yang di-Pertuan Agong to proclaim an Emergency, or whether such a prime minister can suspend Parliament sittings.

Separately, lawyer Syed Iskandar Syed Jaafar had in October 2020 filed a lawsuit against the Malaysian government to ask the court to decide on two constitutional matters, namely whether the Yang di-Pertuan Agong has unfettered discretion to not declare an Emergency despite the advice of the prime minister or Cabinet, and whether the 1981 law that added in the provision to block the courts’ review of Emergency laws is against the Federal Constitution’s basic structure.

Unlike the three other lawsuits, Syed Iskandar’s lawsuit was filed after the Agong had in October 2020 refused the prime minister’s request for an Emergency to be declared. Several individuals including Langkawi MP Tun Dr Mahathir Mohamad have since applied to the courts to be allowed to join Syed Iskandar’s lawsuit.