So how did the first day of ‘digital school’ go? Malaysian parents, students give their verdict (VIDEO)

A Standard One student is seen taking online lessons January 20,2021. — Picture by Ahmad Zamzahuri
Follow us on Instagram, subscribe to our Telegram channel and browser alerts for the latest news you need to know.
By YISWAREE PALANSAMY

KUALA LUMPUR, Jan 21 — For some, digital learning is a necessity in the new normal wrought by Covid-19.

But, for others, this alternative classroom experience is one that is filled with anxiety, fear and uncertainty as they grapple with technology and try to keep up with lessons.

This sentiment is shared by both students and parents, who would like to maintain some semblance of pre-pandemic school life, while adapting to the immediate reality of the start of the 2021 academic year in Malaysia.

Two siblings, one laptop, no WiFi

Thirteen-year-old Alya Khadeeja Mohd Zaidi from SMK Bukit Jelutong, who has just entered secondary school, said she is trying her very best with lessons but is struggling to cope.

Speaking to Malay Mail, the second of four siblings said she misses school desperately as she prefers in-person classes.

Since they don’t have an internet connection at home, Alya and her third sibling Alya Anneesa, 10, follow their mother to work. She runs a halal dim sum stall at a restaurant, which offers free WiFi access to its customers.

The siblings also share a laptop, which they take turns using to attend classes. Her sister, who is in Primary Four, occasionally uses their mother’s handphone for lessons, if the timing of their online classes clash.

“We never had WiFi at home to begin with. The mamak restaurant owner lets us use his WiFi to study,” said the soft-spoken teenager, occasionally pausing to gather her thoughts before answering Malay Mail’s questions.

“I like being in school more. With online classes, I don’t understand much. At least in school, I have regular contact with my teachers to clear up any doubts that I might have.

“My wish is to go back to school. Even if I had WiFi at home, I would still want to study in school,” Alya, who aspires to be a baker, added.

Her eldest sibling, Eilan Irfan, 16, who is in Form Four, uses his smartphone to follow classes. 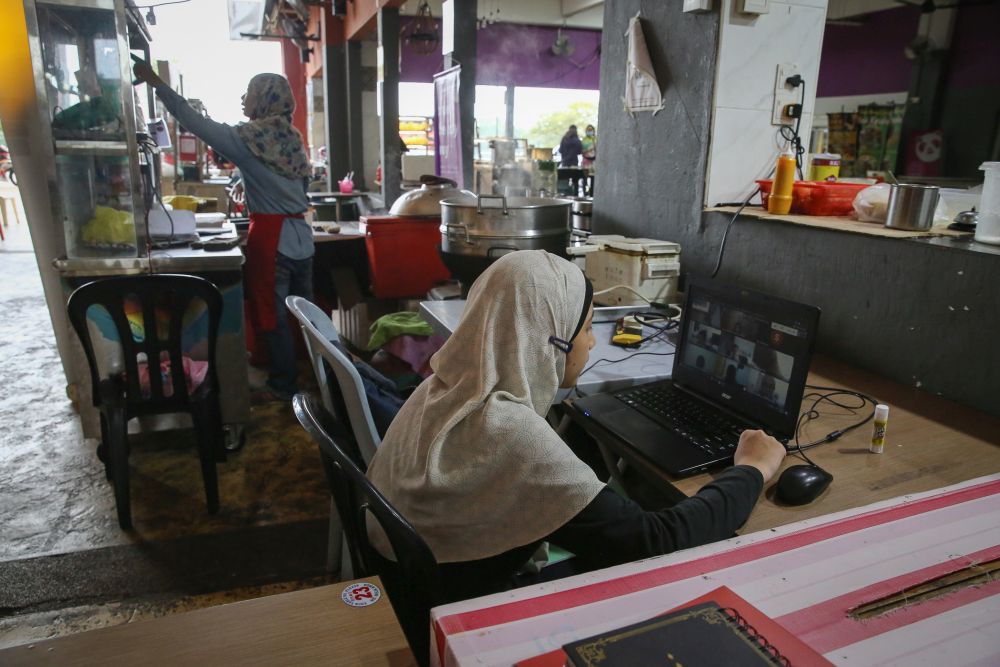 Alya’s parents Maza Asma Mustaffa and Mohd Zaidi Hassan saw their incomes decimated by the movement control order. They are both in the food and beverage industry, which took a heavy beating after the order was imposed.

Mohd Zaidi ran a catering business before the pandemic but is now forced to be a delivery rider to make ends meet. As social gatherings have been banned, orders have dried up for catered meals.

Maza, however, is taking her children’s home learning in her stride.

“For me, there were many challenges initially. I had to be in so many WhatsApp groups with the teachers, but it can’t be avoided, so I just accept it.

“If we can’t afford something, we just make do with what we have,” she said with regards to managing the demands of her children’s online lessons.

The 42-year-old said that the family did not see a need for home WiFi previously, and now, even if it is a necessity, they cannot afford it for the time being.

“God willing, I will work on getting them WiFi. We do have financial issues, so we prioritise what is needed first,” she added.

Maza said that her children could not attend online classes last year, as they were staying with their grandparents, who also do not have internet access.

She is, however, taking steps to make sure they catch up now.

“I do worry. I am still concerned about the whole system now, but I can guide them. That’s why they follow me to work,” she said.

For mother-of-one Rashita A. Hamid, 38, anxiety hit a day before online classes were due to begin.

“Tomorrow morning, online classes commence, and the school only started sending full details yesterday — and WhatsApp is constantly beeping because of this — even at this hour!” she told Malay Mail last night.

“Registration, Google Classroom approval login, download e-textbook, insurance and so much more. This is extremely taxing and mentally exhausting.

“Previously, we just had to do the login approval once, but now, it’s multiple times and I would say not all parents are well-versed with the system. Let’s not forget the technical glitches too,” she said, adding that instructions from the Ministry of Education have been complicated, with teachers having a hard time too.

Rashita’s daughter, however, finds her online classes interesting, albeit a tad challenging.

“I prefer learning online and it was a good experience personally.

“It’s easy because my mum sets up everything for me. It would definitely be hard if I had to do it myself,” 10-year-old Nur Amelia Azmira Muhammad Azmi, who attends SRJK (C) Lai Chee, said.

Santhy Muthalu also shared Rashita’s sentiments, adding that she too is struggling to cope with the volume of work involved in managing her daughters’ online classes, both of whom are at SJK (T) Kinrara.

“Honestly, it is really stressful. My kids are taught two subjects a day. They also have the Google Meet class which happens at night too sometimes. I have to monitor them during that too and juggle work.

She said that she has to coach her daughters for their Tamil-medium articles and stories, record them while they read out loud, and submit the videos to teachers regularly who then assess and comment on the duo’s progress. As her husband is not Tamil-school educated, the responsibility falls squarely on Santhy’s shoulders.

“Some days I have meetings, so I have to put that task on hold until I finish work. But I am truly very thankful to their teachers who are accommodating, as they give us time to complete assignments. However, as a parent, I do not want their homework to pile up either.

“So along with my work, I have to make sure their deadlines are met too,” she added.

Santhy said her daughters, Elakiaa Viknaratnam, 9, and Tamilloviya, 8, rely on her laptop to attend online classes.

“They use my laptop for now. Why? I hope to send them back to school soon, so for now, let them use mine, so I can track them too. I hope school reopens as soon as possible,” Santhy said, adding that she remained concerned about sending her girls back to school.

Housewife Goh Li Wei, 38, also hopes her children will return to school soon, as she worries their prolonged absence could affect their interpersonal skills.

The mother of two told Malay Mail that she currently juggles house chores with keeping an eye on her two sons: Lee Kern Zhi, 12, and Lee Kern Harng, 7. Both boys attend a primary school in Klang.

“The one who is in Primary Six is independent. He is tech-savvy and does things on his own with his Google Classroom, even managing his own timetable. I am not too worried about him as he knows his responsibilities.

“But the younger one had an issue today. First day of school and the Google Classroom link given by the teacher, some could log in, others couldn’t. The technical glitch was stressful,” Goh said.

She added the problem was later resolved, but the fact it could happen again remains a worry.

“Each boy has his own iPad, so they won’t have any issues requiring them to share,” she said.

Goh added that her sons’ school only holds classes for an hour a day, focusing on one subject, without any break in between. This, she said, is also a bid to prevent excessive screen time for children.

“So many parents complained, saying it’s not enough. But for me, I feel it is enough because kids won’t have to sit for long. No use going on for hours. One hour is fine, as they can focus.

“But if possible, I want them to go back to school soon, as that is the proper experience they should be getting as well as learning interpersonal skills. Learning at home for an extended period of time is definitely not a wholesome experience.

“But now with Covid-19 all around us, there is no choice. Safety first, but I hope it changes soon. Children must go to school to experience the actual schooling environment. Now I have to juggle chores and watch over them, taking over the teacher’s role at home. It is alright for me, for now,” she said.