Health Director-General Datuk Dr Noor Hisham Abdullah said Malaysia’s largest Covid-19 cluster, linked to a mass religious gathering in a Sri Petaling mosque in March, officially ended today. — Picture by Choo Choy May
Follow us on Instagram, subscribe to our Telegram channel and browser alerts for the latest news you need to know.
By KENNETH TEE

The first two positive cases from this cluster were reported on March 11, a week after the four-day event held from February 27 to March 3 that was attended by 16,000 people (14,500 Malaysians and 1,500 foreigners).

Health director-general Datuk Dr Noor Hisham Abdullah said there was a big possibility that this cluster originated from overseas and then spread within the community through close contacts during the mass gathering’s activities.

“Many of the positive cases from this cluster were asymptomatic with 2,187 cases or 64.8 per cent of the overall cases.

“A total of 87 patients were treated in the Intensive Care Unit (ICU), with 29 of them requiring breathing assistance,” Dr Noor Hisham said, adding that 3,341 individuals or 98.9 per cent recovered since.

The 34 deaths account for 28.1 per cent of the total 121 deaths in Malaysia so far from the disease.

“The 34 deaths involved 31 Malaysians and three non-Malaysians. Thirty of them were males and four were females with the majority aged between 60 and 69,” Dr Noor Hisham added.

On being the largest Covid-19 cluster in Malaysia to date, Dr Noor Hisham said a total 17 sub-clusters were detected through active case detection and the ministry’s targeted approach in identifying positive infections.

“The last positive case (Case 8,367) recorded from this cluster was from another sub-cluster, a Filipino asymptomatic male student from a madrasah in Kampung Sungai Lui, Hulu Langat.

“Meanwhile, the last recovered patient (Case 799) was a local male from Batu Pahat, Johor who is part of the Bandar Baru Bangi wedding sub-cluster that had recovered on July 6,” he said.

He also congratulated all frontliners for their efforts and determination in curbing the spread of Covid-19 within the cluster for the past four months since March.

When asked whether this would mean that all participants from the tabligh gathering had come forward for screening, Dr Noor Hisham said screening activities will continue for the remaining sub-clusters.

“The ministry will now conduct focused screening among high risk groups that have been identified and based on localities which have not been screened yet,” he said, adding that the ministry and the Institute of Medical Research have made preparations to conduct community immunity research in the near future. 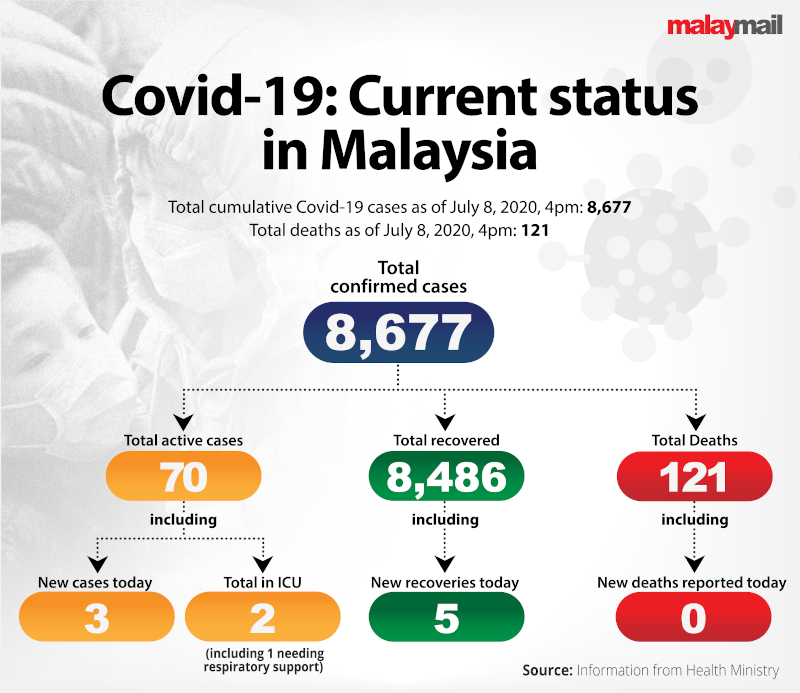