The World Bank said Malaysia will become an ageing society this year, which means seven per cent or more of the country’s population are aged 65 and above. — Picture by Firdaus Latif
Follow us on Instagram, subscribe to our Telegram channel and browser alerts for the latest news you need to know.
By IDA LIM

KUALA LUMPUR, June 26 — The concern of whether Malaysia’s fast-ageing population would have enough savings to live out their days in retirement could be addressed by having the government fund a “social pension”, such as a RM350 monthly payment to senior citizens in the B40 group, the World Bank has suggested.

The World Bank also proposed for the Malaysian government to collect more tax revenue to fund such social protection programmes, through measures such as revising existing tax reliefs, tax exemptions and the current tax regime.

These were among the many proposals by the World Bank on long-term policies for Malaysia to enhance the country’s existing social protection system, with the goal of ensuring that all Malaysians in need would be guaranteed to get a minimum level of protection.

Malaysia to have more elderly

In the World Bank’s “Malaysia Economic Monitor” report released yesterday, it highlighted how important it was to look into ensuring Malaysians have enough income for their old age.

The World Bank said Malaysia will become an ageing society this year, which means seven per cent or more of the country’s population are aged 65 and above.

“Henceforth, Malaysia is expected to continue to age rapidly and projected to become an aged society by 2044,” it said in the report, referring to the situation where more than 14 per cent of the population are aged 65 and above.

“Malaysia’s ageing process will also occur at a much faster pace than in some European countries and Australia, and at a similar speed to that in other countries in East Asia and the Pacific, such as Japan, Singapore, Thailand and China,” it said, noting that Malaysia is projected to take 24 years to become an aged nation just like Japan. 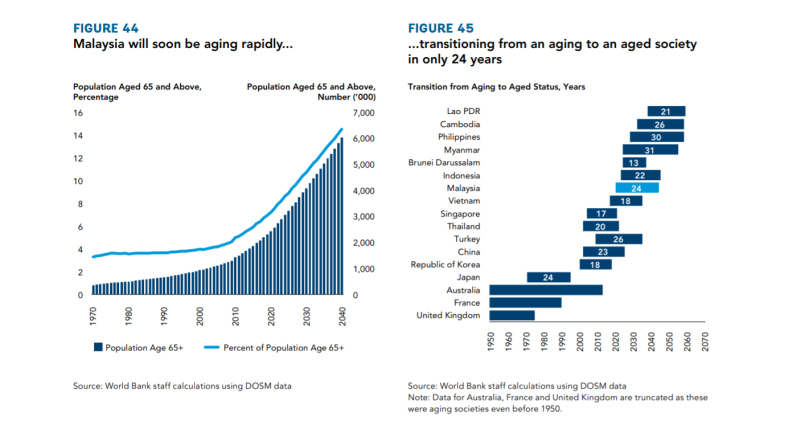 Malaysians may be used to the concept of social safety schemes such as the retirement savings fund Employees Provident Fund (EPF) and the Social Security Organisation (Socso) which are generally based on standard full-time employer-employee relationships, but the changing nature of work — such as the growing popularity of part-time work, self-employment or the gig economy in many countries — means that it is crucial to relook at safeguarding income for Malaysians when they are old. (The EPF however does allow any Malaysian to voluntarily make their own contributions to save up even if they are self-employed or work in the informal sector).

While families in Malaysia have tended to finance the needs of older persons who are no longer able to work, the country’s increasingly urbanising population where the elderly may not be living together with their families would also mean a need to adjust the country’s retirement savings system to support the growing number of elderly citizens.

The World Bank highlighted that its calculations using official statistics suggested that as of last year, 39.2 per cent of the workforce in Malaysia did not have coverage under either the private sector’s retirement fund EPF or the government pension fund. 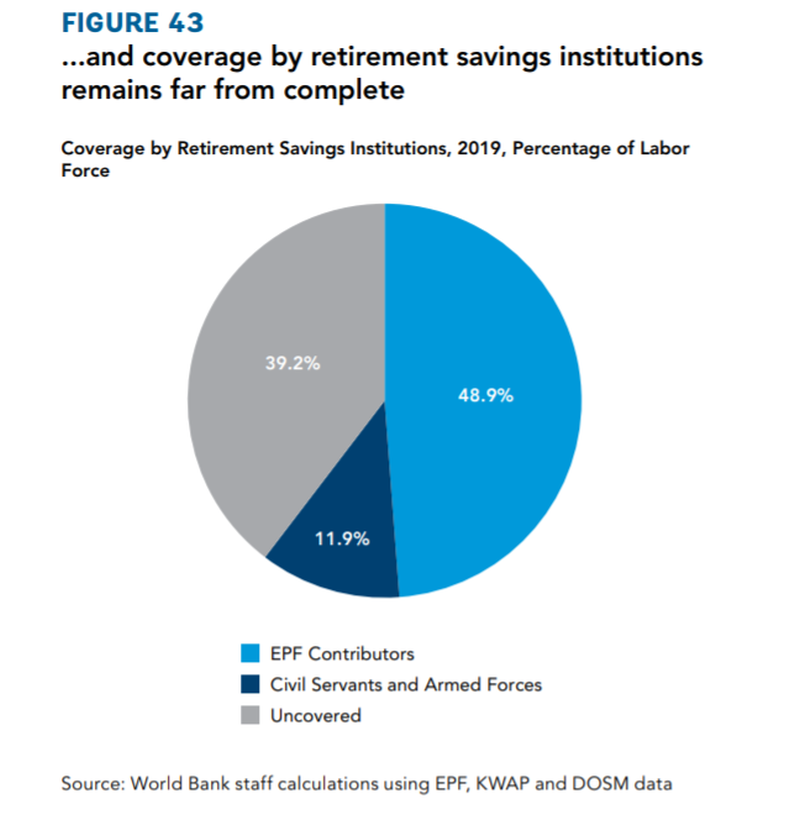 Even for Malaysians who contribute to the EPF to save up for their retirement, the World Bank said most will receive very low monthly benefits from their EPF savings, due to the low level of balances left when they retire due to the relatively early age of 50 (Account 2) and 55 (Account 1) when they can start making withdrawals from their EPF accounts.

The World Bank also pointed out that both workers from low-income households and women would generally tend to have lower rates of EPF coverage and lower balances at the age of 54, due to factors such as not being part of standard employment relationships.

Those in the low-income group also tend to have relatively low average EPF contributions per person. For women, the factors cited for the lack of coverage include their relatively low participation in Malaysia’s workforce (55.5 per cent) when compared to men (80.8 per cent) as of 2019, while the gender wage gap was also cited as contributing to women’s average lower EPF balance at age 54 (RM177,000) as compared to men (RM233,000).

In its Malaysia Economic Monitor report, the World Bank said it is essential for Malaysia to introduce a “non-contributory social pension” to help vulnerable and poor older persons and protect them from poverty, as most of the senior citizens here are expected to have insufficient EPF savings. (Unlike EPF savings where members draw from the contributions they have made over the years, a social pension would not be funded by those receiving benefits or financial payment from it).

In outlining how Malaysia could seek to implement such a social pension, the World Bank said Malaysia would have to consider various factors, such as how many of the population it wished to benefit through this, the minimum benefit or amount needed to improve the target group’s welfare, and the current and future costs.

“In principle, social pensions could either be targeted at all those above a certain age; restricted to those with insufficient income or EPF balances; or provided as a supplemental benefit for those in households qualifying for other social assistance,” it said when laying out the possible target groups.

“In the short or medium term, one practical option would be to introduce a relatively modest social pension of the same benefit level of RM350 per month targeted at the B40 aged 65 and over and using the BSH/BR1M implementation system,” it said, referring to the government’s Bantuan Sara Hidup scheme where registered B40 or low-income households receive cash aid.

The World Bank said such an option is projected to cost about 1.6 per cent of the government’s projected revenues in 2020, going on to say that the social pension scheme’s coverage or benefit amount could be expanded over time if government finances permit.

The RM350 monthly social pension suggested in the World Bank’s example is equivalent to the Social Welfare Department’s (JKM) Bantuan Orang Tua (BOT), where a monthly cash aid of RM350 is targeted at elderly persons aged above 60 with no fixed income and with no family support.

The World Bank highlighted that 135,000 out of the nearly 500,000 individuals who benefited from JKM’s social aid programmes in 2018 were BOT recipients, with the BOT cash aid to these elderly groups accounting for RM554 billion of the roughly RM1.7 billion spent for JKM programmes the same year.

Beyond cash aid to elderly

In the same report, the World Bank highlighted that Malaysia will need to address the expected growing demand for aged care services, which was described as still being at its infancy in the country.

The challenges include regulating the industry and enforcing basic standards, improving the scope and quality of aged care services, having enough funds such as via government grants, donations or zakat for lower-income households’ aged care needs, and increasing the number of qualified social and care workers.

Among other things, the World Bank proposed that Malaysia develop a Social Protection Masterplan to shift the country from running a set of social protection programmes to a social protection system, also proposing that such a document be directly actionable instead of just being a study.

As part of its many proposals for Malaysia, the World Bank urged the government to diversify its revenue sources and increase its revenue in order to have funds for a more comprehensive social protection system.

“First, the progressivity of the personal income tax framework could be increased, with a reassessment of current reliefs and exemptions, as a means both to increase revenue and to redistribute income,” it said.

The World Bank also suggested the expansion of capital gains tax, and a look into the feasibility of other types of taxes on non-earned income.

“Currently the real property gains tax is very restricted in application, with very generous reliefs. In Malaysia, inequality in wealth is significantly greater than inequality in income, so taxing a share of the gains made from asset price inflation could provide an important new source of public sector revenue.

“Third, indirect taxation could be broadened by restricting zero rated and exempted items to a more limited set of goods and services. A gradual lifting of the SST exemptions and zero-ratings on selected non-essential items, particularly those not within the B40 consumption basket, could facilitate increased revenue without jeopardizing the purchasing power of lower income households,” it said, adding that this could be accompanied by other measures such as imposing greater taxation on income and wealth while spending more on progressive social expenditures.