KUALA LUMPUR, May 26 — The Health Ministry today explained that Hari Raya celebrations and trips across state borders are not why Malaysia’s daily number of new Covid-19 cases suddenly shot up yesterday to 172.

Yesterday’s new Covid-19 cases marks a break in three weeks of calm where the numbers were in two-digit region, and mostly below 60 cases, which also means that yesterday’s figure was the highest in three weeks.

Malaysia had also enjoyed a relatively steady period of generally two-digit growth in new Covid-19 cases for more than a month since April 15 (85 cases — the first time numbers went below 100 during the movement control order period) until May 25 (yesterday), with only three other times besides yesterday reaching triple digits — April 16 (110), May 2 (105), May 3 (122).

Not due to Hari Raya

In a Facebook post today, the Health Ministry dispelled the misconception that Hari Raya celebrations or interstate travel are the reason why the number of new Covid-19 cases detected yesterday (172 cases) tripled from 60 cases on May 24 and more than tripled from 48 cases on May 23.

“This increase has caused worry and some claim that the permission to cross state borders for certain individuals with the reasons of work and emergencies as a cause. There are also those who blame Hari Raya Aidilfitri celebrations that do not comply with SOP,” the Health Ministry said.

But the ministry pointed out that the effects of interstate travels or any non-compliance with Covid-19 precautions for Hari Raya visits would only show after two weeks, explaining that the bulk of yesterday’s cases were actually among foreigners detained in immigration detention centres.

“It has no connection to the relaxation of interstate trips given to certain individuals and Hari Raya celebrations. Because the incubation period is 14 days, the effect of crossing state borders with permission or without permission can only be seen 14 days from now.

“The same with the permission for Hari Raya visits. If many do not comply with SOP, the cases can increase by many times more and this can be seen in 14 days from now,” the ministry said.

The first day of Hari Raya was on Sunday (May 24) with visits allowed only on this day among family members, with Malaysians told to limit the numbers when meeting, while the police had for the past week ordered many Malaysians attempting balik kampong to turn back at roadblocks.

The police have warned that those who managed to slip past roadblocks to carry out unauthorised interstate trips would be tracked down and could still face action when they make the return trip, with the police having also issued compounds or fines to such individuals since Hari Raya eve.

Under the conditional movement control order (CMCO) that Malaysia is under until June 9, interstate travels are only allowed for those going to and fro work without police permission required, while prior written police permission is required for interstate trips for special and particular reasons and emergencies.

Today, the Health Ministry reiterated that the 172 new Covid-19 cases detected yesterday comprised five imported cases, or those who had been infected while abroad, while 167 cases were transmitted locally.

But out of the 167 cases, only eight cases involved Malaysians while the remaining 159 cases involved foreigners with 112 of them found at three immigration depots.

“Meaning, some of these cases were found at the Bukit Jalil, Semenyih and Sepang immigration depots. These foreigners or detainees (OKT) have been isolated much earlier from the local community and these new cases are due to infections among detainees in immigration depots.

“For the Health Ministry, these infections are ‘easier to control’ as they occured in controlled areas. The strategy of targeted approach used by the Health Ministry will be more effective to detect patients,” the ministry said in the same Facebook post.

Brace for a spike in near future

The Health Ministry said it predicts that the daily number of new Covid-19 cases is expected to increase in the next two or three days with the majority involving foreigners in immigration depots, which it said would be a natural result of more comprehensive checks by the ministry in the three depots and due to the results being ready from Covid-19 tests that are currently pending.

Dr Noor Hisham yesterday said that confined spaces at immigration depots could have contributed to the spread of Covid-19 cases, and had also highlighted how cramped living conditions among foreign workers — such as 30 being crammed in one small apartment in a Masjid India example cited — could have led to Covid-19 clusters involving them despite employers heeding standard operating procedures and precautions at the workplace such as construction sites. He had noted that Covid-19 infections happen regardless of one’s ethnicity or social status, and cautioned against discrimination when it comes to saving lives and health matters.

While the Health Ministry today said worries over yesterday’s increase in new Covid-19 cases would help increase the public’s compliance with Covid-19 precautions, it said that such concerns should be based on accurate information.

“The worries shown by the public following the increase in these new cases is something that is positive. When we are worried, we would directly increase the practise of the recommending precautions. However, worrying without reasonable causes is also a concern as it can lead people to spreading untrue and confusing information,” it said. 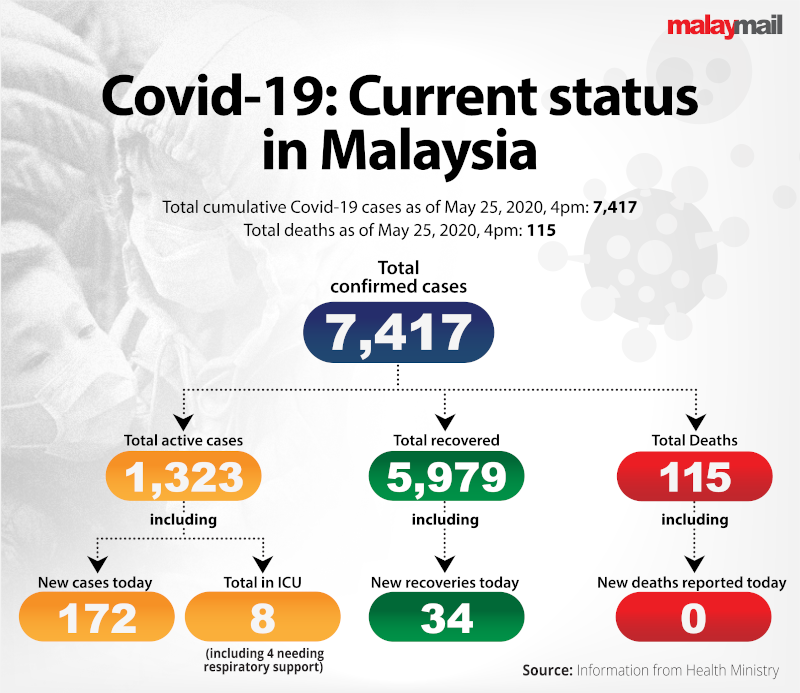