Food delivery rider Zaim Zafran, 21, is pictured at the Taman Tun Dr Ismail wet market May 6, 2020. — Pictures by Ahmad Zamzahuri
Follow us on Instagram, subscribe to our Telegram channel and browser alerts for the latest news you need to know.
By RADZI RAZAK

KUALA LUMPUR, May 8 — When the movement control order (MCO) was enforced, Malaysians staying home became dependent on food delivery riders — two major food delivery companies even increased the number of riders working for them to cope with the spike in demand.

On May 1st, when Prime Minister Tan Sri Muhyiddin Yassin announced that almost all economic sectors will be allowed to reopen from May 4, many thought the demand for food delivery service will slow down, however that has not been the case.

Food delivery riders told Malay Mail that their incomes remain unaffected even under the conditional movement control order (CMCO) which gives more freedom to Malaysians to leave their homes.

The riders said they believe they will still be able to earn about RM3,000 to RM4,000 per month.

Food delivery riders, who are mostly youth, have become a common sight since the nation became more homebound since March 18 in a bid to break the chain of Covid-19 infections.

Food delivery riders have become frontliners of sorts ensuring people at home have access to food rain or shine.

There are more than 40 registered e-hailing companies in the country that are allowed to operate as usual during the MCO and CMCO.

Mohd Khairul Anwar Abidin, 23, told Malay Mail that he has been receiving about the same number of orders since Monday even as reports have filtered through about more people and cars being seen in Kuala Lumpur and the Klang Valley. 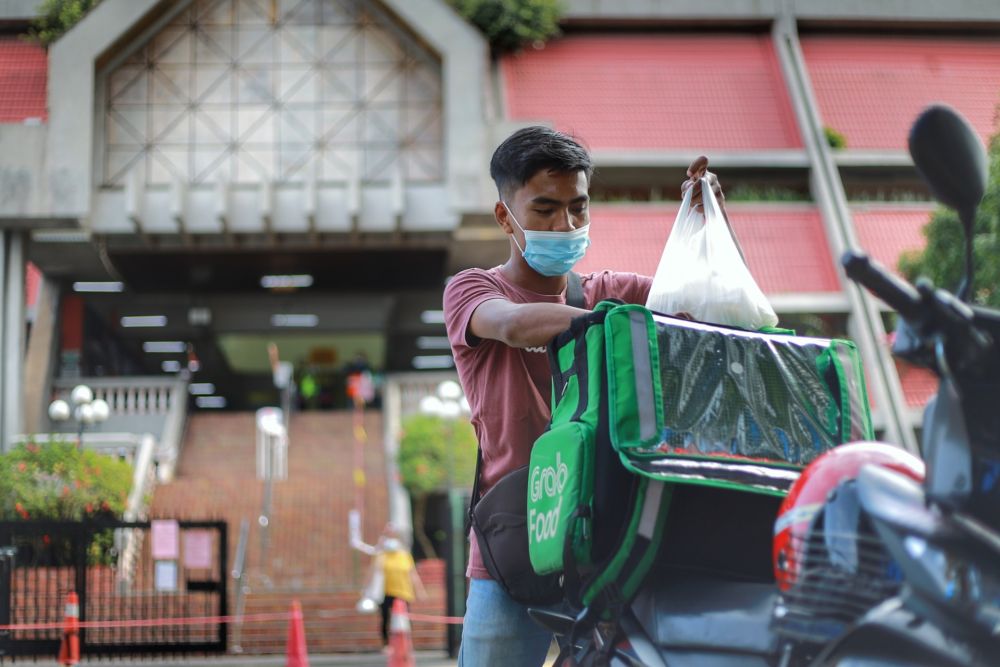 He said he has been receiving about the same number of trips in a day since March, as people still depend on the food delivery riders.

“It is about the same. I think because many of the shops here are not open for dine-in, or maybe because it is Ramadan. People still order in,” he said.

His friend, Nazri Abdul Karim, agreed, adding that orders are a bit slow in the morning before picking up towards the breaking fast time at approximately 7pm.

“After 4pm, our trips start to climb. More and more people want to order food for ‘berbuka’ (break fast). With shops now allowed to open until 10pm, we have to do more trips,” he said.

Nazri also said that many customers have told him that they prefer having food delivered to them as they do not want to be part of a crowd while the Covid-19 outbreak is still a threat to public health.

“My customers said it is better as they do not have to queue outside and expose themselves unnecessarily,” he said.

Nazri, Khairul and his friends were seen hanging out with their food delivery buddies outside a McDonald’s in Kuala Lumpur after spending the day making an average of 10 to 20 deliveries in the Klang Valley.

Meanwhile, Azhar Khairuddin, 21, and Zaim Zafran, 21, both agreed that they had made the same volume of deliveries during MCO and CMCO.

“I don’t think anything has changed since Monday. My trips are about the same,” said Azhar while waiting for his food order to be prepared at a shop in Kuala Lumpur.

Zaim added that there have been no differences in his work and still gets about the same amount of money every day.

“My daily income is the same as usual,” said Zaim before zipping off to make a delivery to yet another grateful customer.