KUALA LUMPUR, April 22 — Foreigners are among 104 individuals who were charged with defying the movement control order (MCO) at several magistrate’s court here and in Perlis today.

In the Kuala Lumpur Magistrate’s Court, 73 people, including four women and nine foreigners — comprising Bangladeshi, Myanmarese, Filipino and Yemeni — were sentenced to between two days and two months’ jail, as well as fine of between RM700 and RM1,000 each, in default a month’s jail,  after they pleaded guilty to the charge.

Some of them were charged with defying MCO by moving from one place to another to attend a friend’s birthday party with a few caught loitering at a motorcycle workshop.

All of them, aged between 21 and 55, were ordered to serve the jail sentence from the date of their arrest.

They were caught defying the MCO in Bukit Bintang, Sungai Besi, Cheras and Taman Tun Dr Ismail between April 14 and 20.

At the Ampang court, 11 people, including a 13-year-old Myanmar boy, and an Indonesian woman, were charged with the offence.

The court postponed to July 1 for sentencing of the boy pending his probation report, while the others, aged between 19 and 53, were fined between RM600 and RM700, in default a month’s jail.

They were charged with flouting Regulation 3 (1) of the Prevention and Control of Infectious Diseases (Measures within the Infected Local Areas) Regulations 2020, which is being enforced under the MCO.

In Perlis, Muhammad Syabli Nooraldin, 21, and Mohd Nur Aiman Noorzan, 19, were sentenced to a month’s jail each by the Kangar Magistrate’s Court for being in an infected area without reasonable cause during the MCO period.

They were caught committing the offence at Jalan Sungai Alor Melaka, Mukim Kurung Anai, on April 16.

The two men, with another person, Saiful Amar Md Ros, 35, were also sentenced to six months’ jail for dishonestly receiving a stolen motorcycle belonging to a woman with disability at the same place and date. — Bernama 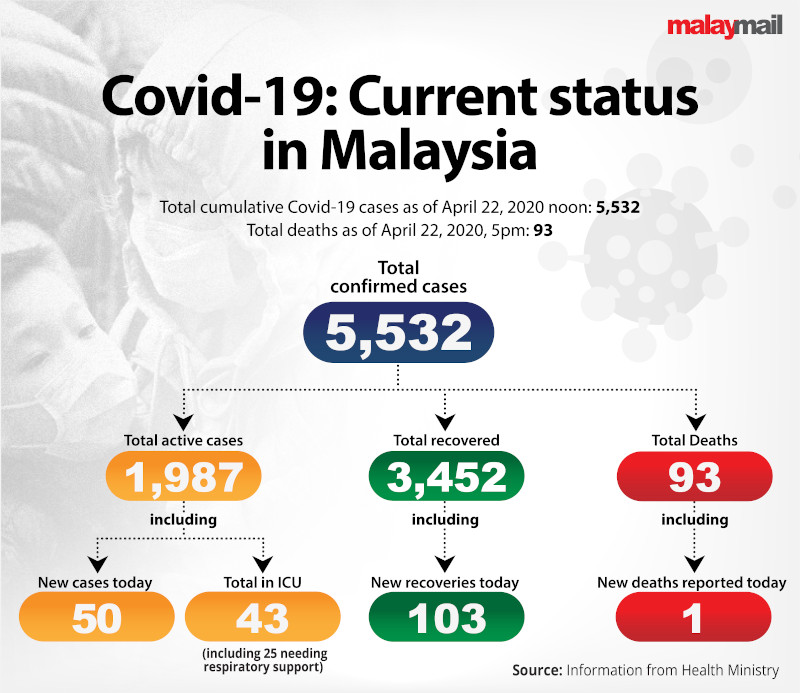