“This means our death rate for those with Covid 19 is now at 1.6 per cent,” he said during his daily media briefing on Covid updates.

Dr Noor Hisham said Malaysia also discharged the highest number of Covid-19 patients today again at 122, bringing the total to 767 cases, or 24.6 per cent of the total number of cases.

Yesterday, Malaysia had recorded 108 Covid-19 recoveries, the highest number then.

On the five new deaths, three were from Johor while two were in Sarawak and Negri Sembilan respectively.

The 46th recorded death was of a 37-year-old man with low immunity and a history of chronic illnesses. He was warded at the Sultanah Aminah Hospital in Johor Baru on March 28 and died the next day at 11.10pm. 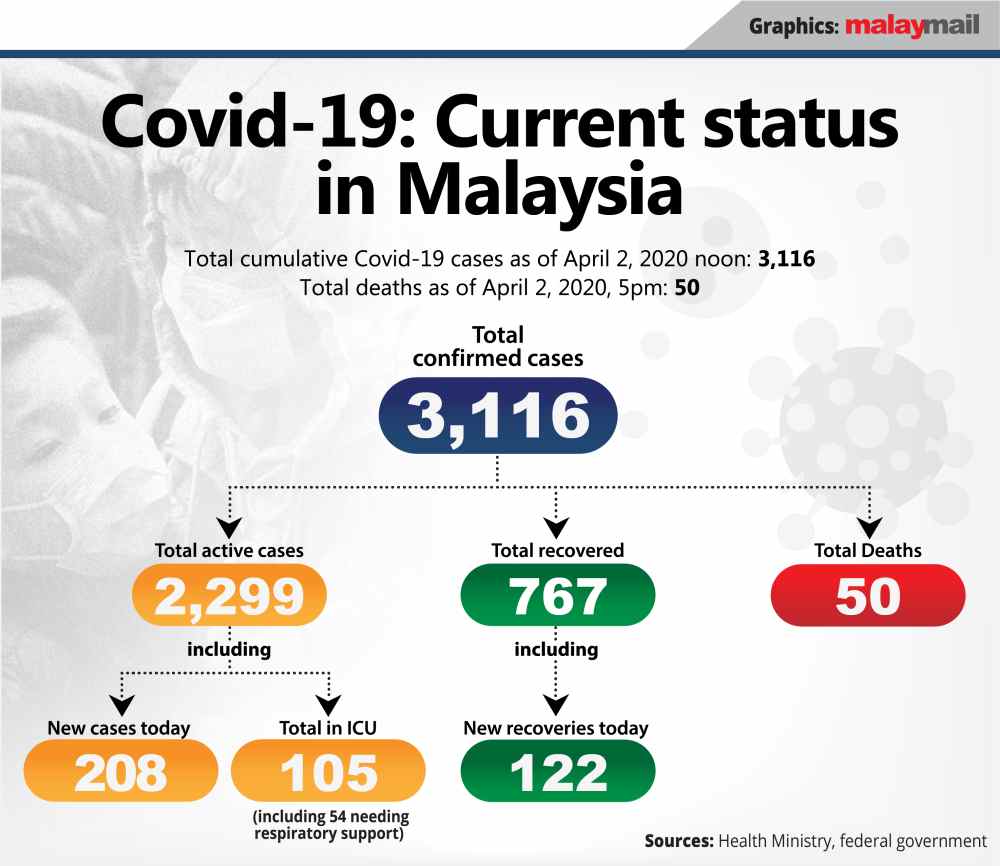 The 47th case was of a 78-year-old man who was suffering from high blood pressure and gout. He was treated at the Sultanah Fatimah Specialist Hospital in Muar on March 17 and died on March 29 at 7.10pm.

The 48th cases was that of a 85-year-old man with diabetes, high blood and heart disease that was treated in Enche Besar Hajjah Khalsom hospital in Kluang on March 29 and died on April 2 at 8.01am.

The 49th death was of a 61-year-old man who had contact with another Covid-19 patient and was warded at the Sarawak General Hospital on March 20 before he passed away on April 1.

The 50th death was that of a 69 year old man who was treated at the Tuanku Ja’afar Hospital in Negri Sembilan on March 22 and died today at 2.20pm.

“As of now, there are 105 Covid-19 patients under the Intensive Care Unit, of which 54 require breathing aid,” he said.

So far, the death rate of Covid-19 patients in the country is 1.6 per cent, while the global death rate is about 4.8 per cent.

Malaysia has entered phase two of the movement control order, which starts today and will last at least until April 14.