KUALA LUMPUR, March 23 — Four more deaths caused by Covid-19 were recorded over the last 24-hours, with a jump of 212 new confirmed cases of infection registered over the same period which was the country’s highest daily rise so far.

This brings the total number of local infections to 1,518, with 14 deaths recorded so far, and 159 who have recovered and discharged, the Ministry of Health said today.

Health Ministry Director-General Datuk Dr Noor Hisham Abdullah revealed 123 of the new cases recorded over the last day were linked to the tabligh gathering cluster, which has caused some 943 infections so far.

“Up to now a total of 57 Covid-19 positive cases are being treated in the Intensive Care Unit (ICU). From that total, 27 of them require assistance breathing,” he said during the ministry daily press conference.

He said of the four most recent deaths, death number 11 was a victim from the Klang Valley, the 12th from Johor, and the 13th and 14th from Sarawak, Kuching and Miri respectively.

He had a history of travelling abroad and was being treated at the Hospital Canselor Tuanku Muhriz in Bandar Tun Razak, before he died yesterday.

“He had attended the tabligh gathering at the Seri Petaling Jamek Mosque and was being treated in Hospital Kluang. His death was confirmed on March 23,” Noor Hisham said.

The deceased was the son of case number 1,031 who had died earlier and was being treated at the Sarawak General Hospital before he died earlier today.

“She was a close contact of a positive case from the tabligh gathering cluster and was being treated in Hospital Miri. She was confirmed dead on March 23,” Noor Hisham said today.

“The Health Ministry would like to offer our condolences to all their family members,” he added. 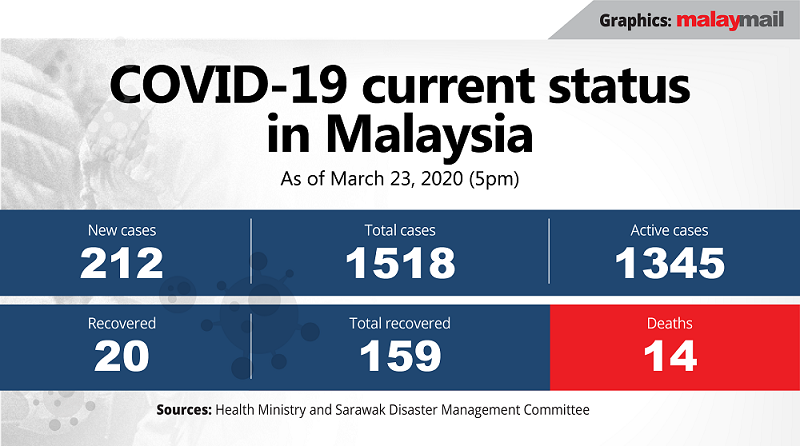