The Kuala Lumpur International Airport looking like a 'ghost airport'. — Picture by Thasha Jayamanogaran
Follow us on Instagram, subscribe to our Telegram channel and browser alerts for the latest news you need to know.
By THASHA JAYAMANOGARAN

KUALA LUMPUR, March 19 — The scene at the Kuala Lumpur International Airport (KLIA) was very different from the one I left as I flew out to Amsterdam some two weeks ago.

Back then even as the Covid-19 outbreak was happening, the airport was bustling. People were going about their business and even, holidays.

But yesterday evening, it looked like a “ghost airport” as it was pretty much deserted except for the noise coming from a small room near the immigration security area at the arrival hall.

The noise was coming from a dissatisfied group of 20 to 30 foreigners who had been hauled up by the Malaysian Immigration officers.

It was Day One of the Covid-19 shutdown in Malaysia where all foreigners were not allowed to enter Malaysia till March 31.

These foreigners were attempting to negotiate their way in but of course, it was a no go. I could hear one of the immigration officers saying, “No means no, we already announced no incoming for foreigners. Why didn’t you follow?”

Among the group was a Malaysia woman who was seen arguing with another immigration officer; she had returned to the country with an Indian national and pleaded with the airport authorities to allow the person entry.

But the officer stood his ground and told the Indian national to book a ticket home to his country.

I wondered why the airlines allowed these foreigners to board the plane bound for Malaysia in the first place, knowing full well that the shutdown started yesterday.

I guess these airlines — the flight I came in on was not Malaysian — feel they are not responsible.

Some of these foreign travellers were aware of the shutdown but they were willing to try their luck. 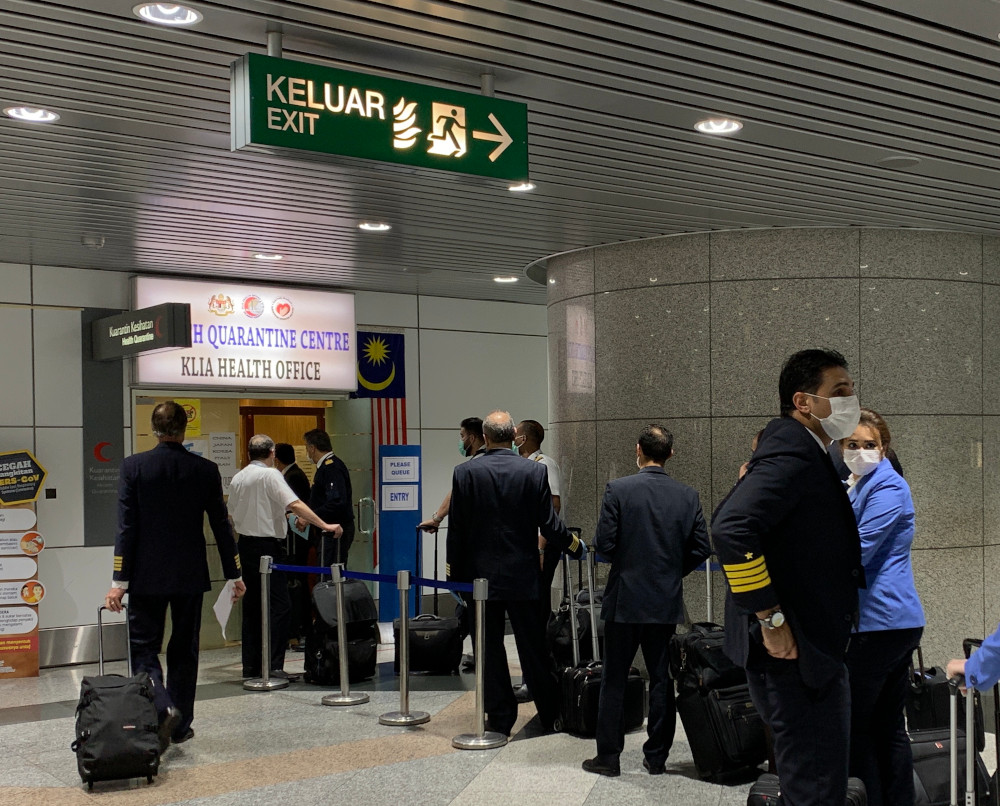 Pilots and flight crew queue to get cleared at the Kuala Lumpur International Airport's health office. — Picture by Thasha Jayamanogaran

Like the South American man on my flight. I asked him why he would attempt coming to Malaysia despite knowing that the country has placed a ban on all foreigners and he said, ”I mean, you never know, it’s just the first day, I’m sure they would give a little leeway. So I’m just gonna try.”

Arriving passengers had to go through thermal scanners and then we were referred to the KLIA health office.

I was instructed to self-quarantine for two weeks and given a pamphlet on what I should do during this period.

There were very few Malaysians on the three different flights that arrived while I was there; I noticed they were all mostly students returning from the UK.

I spoke to several parents at the arrival hall and one said, “It’s better they come back now, because there is so much uncertainty at the moment.

“We never know when the UK will shut their borders and there might be a situation where it will be even more difficult to get them back home.”

One student, Dorcas Chua, 22 who had just returned from the UK said she felt more secure coming home.

“I feel more secure here because there is no escape for us if there is a lockdown in the UK… there is no point staying as most of the semesters are happening remotely now and we have been informed that it will be the same the next term.”

All restaurants and retail outlets in KLIA are closed with only certain eateries like Starbucks offering takeaways.

Most eateries were also encouraging customers to use pay wave with their credit cards instead of hand-to-hand contact with cash transactions.

During my flight, KLM also practised distancing their passengers by separating them to available empty seats. Every aisle had two passengers with the middle seat empty.