KUALA LUMPUR, Feb 9 — Wild otters have now been reported at four locations within the Klang Valley, less than five months after initial reports of their first sighting.

Previously, the only place Malaysians could reliably encounter these creatures were in captivity.

Yet nothing beats viewing the animal in its element, just like wild penguins are often spotted by both locals and tourists at the famous St Kilda beach in Melbourne, Australia.

The first sighting of the wild otters in Taman Tasik Metropolitan Kepong has encouraged more people to contact the media with information about their discoveries.

Apart from Taman Tasik Metropolitan Kepong, Malaysian Nature Society (MNS) research assistant focusing on otters Woo Chee Yoong said there have been three other locations were they have been seen.

These include the vicinity of the Kuala Lumpur International Airport (KLIA) in Sepang, the Perdana Botanical Garden and, most recently, in the lake at the Subang Ria Park in Subang Jaya. 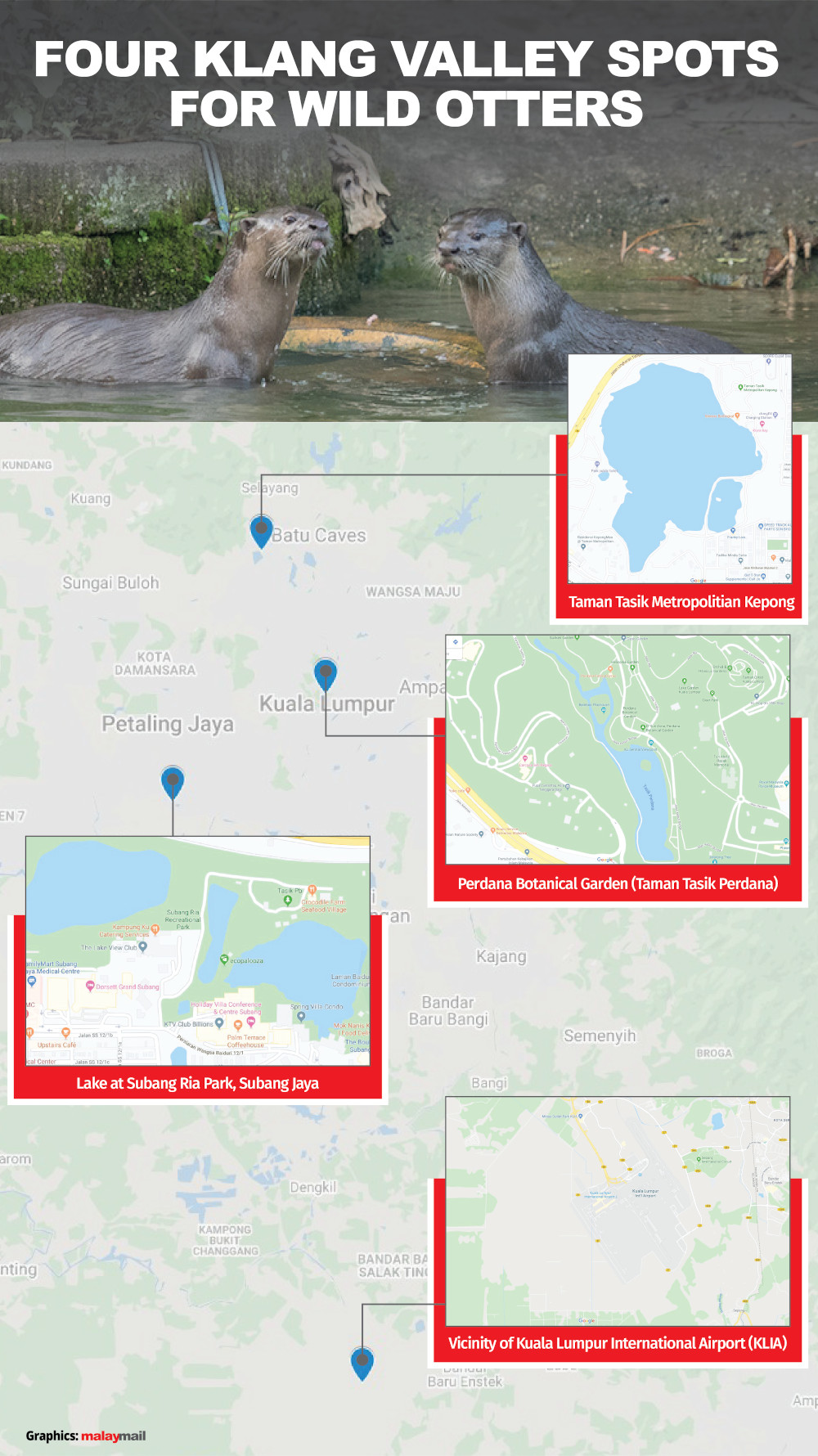 Woo urged those who see these creatures to not only satisfy their curiosity, but also report their sightings to help guide conservation efforts.

“We encourage and welcome any form of information about these otters as it helps with our conservation works.

“It is good that more people are aware of the existence of otters in Malaysia, rather than the usual highlight of monitor lizards swimming in the river,” Woo said when contacted by Malay Mail.

Due to their relative rarity, otters are often confused for beavers. Woo said more reports of these sightings will help increase awareness of both the creatures and their surroundings.

“I will continue to encourage the environment to be kept clean for both the otters and the public.

“Don’t try to catch the otter and don’t keep one as a pet. There is a reason why otters exist in the wild.

“So with more sightings, there is nothing to worry about — where they came from, or why are they are there,” he said, referring to possible previous sightings that were not yet reported and kept within local circles.

Woo pointed out that the presence of otters signified healthy wetlands and functioning ecosystems; otters are intolerant of polluted surroundings.

“Otters are very smart mammals. They will not choose to stay in an area if the environment is not clean and if it does not have sufficient food supply.

“In the case of the Subang Jaya park, most likely there is a good supply of fish,” said Woo.

The disappearance of otters from these locations would indicate that the environment was becoming polluted, he said.

An example of a healthy water body includes the Greater Ulu Muda Forest Complex that supplies water to Perlis, Kedah and Penang; otters are found there.

Previously Sahabat Alam Malaysia reportedly said a family of 10 otters were spotted in Sungai Pinang, Penang, which was previously considered to be highly polluted.

Malaysia is home to four protected otter species: the smooth-coated otter that is listed as “threatened”, the Asian small-clawed otter, the hairy-nosed otter, and the Eurasian otter.

In all of the recently reported sightings, the otters are believed to be the smooth-coated (Lutrogale perspicillata) variety, which is listed globally as a vulnerable species.

According to Woo, since August last year, the smooth-coated otter has been listed on the CITES (Convention on International Trade in Endangered Species) Appendix I (previously only Appendix II since 1977), strengthening its protection from international trade.

Under the CITES Appendix 1, commercial trade in wild-caught animals of these species is illegal and is permitted only in exceptional licence circumstances. This means otters may not be kept as pets.

He also said otters were the apex predator in wetlands and helped to control the population of fish, including invasive species.

Despite the growing number of sightings in urban areas, Woo said it was still unknown how they came to be there.

“We don’t know if their original habitat is near these locations, or if they are passing by, or just out to hunt for food.

“With little data, we are not able to answer questions asked pertaining to this,” he said.

Those with information on the otters or are keen to report their sightings may contact Woo via email.