Senior Vice-President of AmBank Group (Credit Card, Authorisation and Banking Fraud Management) Yeoh Eng Leong is pictured at the Kuala Lumpur High Court December 2, 2019. — Picture by Ahmad Zamzahuri
Follow us on Instagram, subscribe to our Telegram channel and browser alerts for the latest news you need to know.
By IDA LIM

Testifying against Zahid in his corruption trial, Yeoh noted that the monthly credit card statements sent to Zahid at the Home Ministry's Putrajaya headquarters for the period from November 2013 to January 2016 showed that “all or at least one of the cards were used actively for retail transactions both in Malaysia and overseas”.

“Card payments were frequent but not always on time. This has resulted in several late payment charges being imposed on the respective card,” said Yeoh, who is AmBank's senior vice-president in charge of credit card authorisation and fraud control.

“To the extent of my knowledge and as per the bank records, the bank did not receive any dispute on the billing nor complaint of unauthorised transaction from the cardholders,” he added.

Yeoh started from December 2013’s credit card statement where Zahid's Mastercard was recorded as having been used for retail payment totalling RM63,701.52 on one single day in the UK on December 23, 2013, including RM55,402.40 at Ermenegildo Zegna in London and RM7,043.29 at Harrods in London. 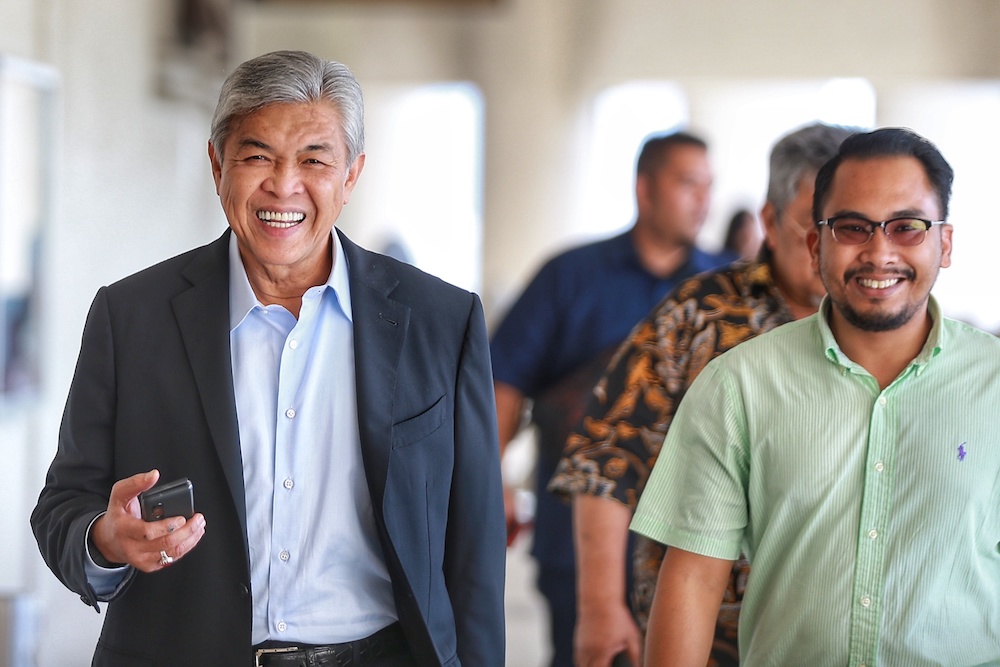 Also in the December 2013 statement, a payment for RM247,802.28 was made by cheque for Hamidah's Visa card, while her MasterCard was used for a RM1,289 purchase in Malaysia, Yeoh confirmed.

For January 2014's credit card statement, Zahid's Mastercard was recorded being used in Malaysia for a RM1,949.95 purchase at a Toys R Us outlet in Selangor with a cheque payment of RM63,701.52, Yeoh said.

For the February 2014 statement as read out by Yeoh, Zahid's Mastercard recorded a payment of RM1,949.95, while Hamidah's Visa card had RM5,753 retail transactions in Kuala Lumpur with a RM20,858.36 payment via cheque, while her Mastercard was used in Bangi for RM1,791.30 spending.

For March 2014, Zahid's credit cards had no transactions recorded, while Hamidah's Visa card was used for a total of RM54,843.18 spending in outlets in Melbourne, Australia including RM10,066.77 at Max Mara and RM9,254.63 at Giorgio Armani and stores such as Myer as well as Wheel & Barrow, while RM9,769.60 under Hamidah's Mastercard were spent in Melbourne, Australia and Malaysia including RM3,764.00 at Habib Jewels' outlet in KLCC.

Yeoh also referred to the April 2014 statement showing a RM2,000 payment for Zahid's Mastercard, while Hamidah's Visa card was used for RM130,359.83 spending in Hong Kong, Malaysia and Australia including RM26,893.33 at Burberry in Hong Kong and RM9,500 at a Louis Vuitton outlet in Starhill Gallery in Kuala Lumpur with a RM20,858.36 cheque payment was also recorded for this card and a RM600 cheque payment recorded for Hamidah's other card.

Other monthly credit card statements for the May 2014 to July 2015 period referred to by Yeoh also showed Zahid's own credit cards being used in places such as Kiev in Ukraine, UK, US, Milan in Italy, and Dubai in the UAE.

Yeoh also confirmed the records for May 2014-July 2015 of Hamidah's supplementary credit cards being used for retail spending at places such as Vietnam, Australia, Dubai in the UAE, New York in the US, UK, Taiwan, Milan in Italy, Jakarta in Indonesia, and Seoul in South Korea.

Later in the afternoon, Yeoh went on to confirm monthly bank statements for the AmBank credit cards up until January 2016.

Today is the fifth day of Zahid’s trial, where he is facing 47 charges relating to alleged criminal breach of trust using millions of ringgit from charitable firm Yayasan Akalbudi, as well as bribery, money-laundering.

The trial before High Court judge Collin Lawrence Sequerah resumes tomorrow morning, where Yeoh is expected to be cross-examined by Zahid’s lawyers.