Datuk Seri Ahmad Zahid Hamidi is pictured at the Kuala Lumpur High Court December 2, 2019. — Picture by Ahmad Zamzahuri
Follow us on Instagram, subscribe to our Telegram channel and browser alerts for the latest news you need to know.
By IDA LIM

KUALA LUMPUR, Dec 2 — Six of the cheques that were used to pay for Datuk Seri Ahmad Zahid Hamidi’s credit card bills did not carry his signature by hand, but could have been signatures stamped on using a stamp, the former minister’s lawyer said today.

Zahid’s lead defence lawyer Hisyam Teh Poh Teik told the court that these were the findings of an expert document examiner at the Department of Chemistry Malaysia who had examined the signatures on these cheques.

Teh had produced the chemist report dated February 28, 2019 and prepared by Siti Nur Musliha Mohamad Noor, where the expert found the signatures in a series of cheques including the six cheques had “similar characteristics as stamp impressions” and made the opinion that they were produced using a stamp.

In the report, the expert gave the opinion that these signatures “could have been made using the same source of stamp” due to them matching each other in terms of “design, size, alignment and spacing”.

The expert further noted in the report however that the stamp impression signatures in question showed some similarities with the handwriting characteristics as a specimen signature.

Teh then questioned Maybank vice-president Anoop Singh Gulzara Singh about the chemist report’s findings on the six cheques that were used to pay for Zahid’s credit card bills, suggesting that Zahid could not have stamped his own signatures on these cheques.

Teh: With the benefit of this document, I’m suggesting that your cardholder Ahmad Zahid did not stamp these six cheques and made payment to you.

Anoop: I do not know.

Teh: I put it to you also that in fact these six cheques were stamped by his personal assistant at that time, her name is Major Mazlina, you know or do not know?

Teh then asked for the original six cheques to be shown to Anoop who were viewing them for the first time, as well as to High Court judge Collin Lawrence Seqeurah who studied each of these cheques.

The six cheques were part of nine cheques paid to Maybank between February 2014 to July 2015 for Zahid’s MasterCard and Visa card, as well as American Express credit card.

As for one of the nine cheques that were given to Maybank in September 2014 to pay for Zahid’s Visa credit card but was returned, Anoop confirmed that he knew that the cheque was returned as it was unsigned.

Teh then went on to suggest that this could be attributed to Zahid’s then former personal assistant identified only as Major Mazlina where she allegedly made such payment despite the cheque being unsigned, but Anoop said he has no knowledge of this.

Teh also suggested to Anoop that Zahid had his own money to pay for his credit card bills.

Teh: I put it to you that at all material times, your cardholder Datuk Seri Ahmad Zahid has the ability to settle all your statements from February 4, 2014 to July 26, 2015 using his personal funds,  you know or do not know?

Anoop: I do not know. 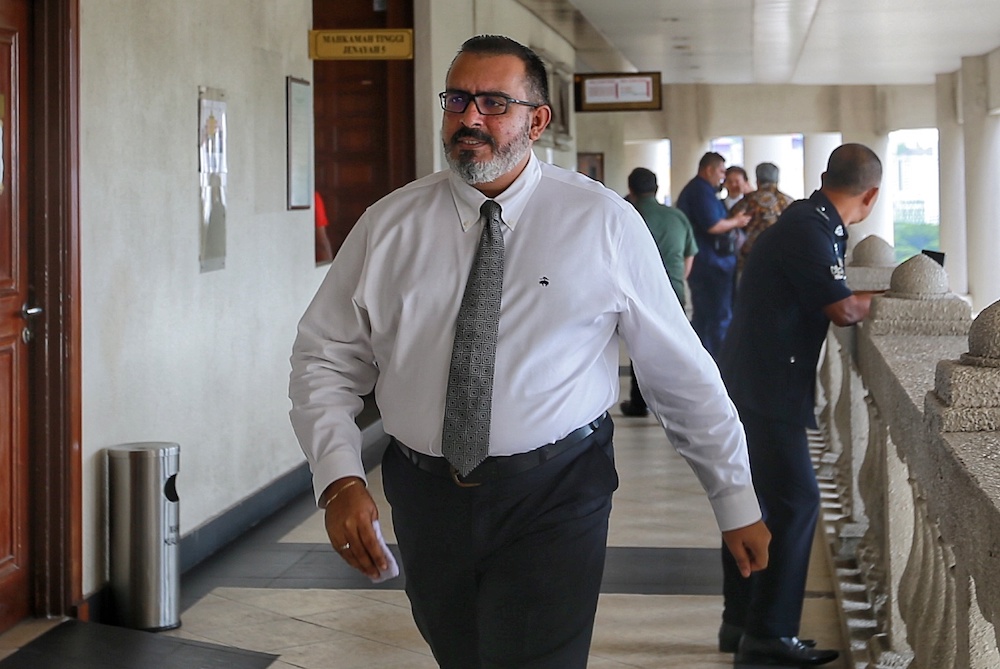 He also verified a credit card statement that showed RM5,900 of Zahid’s Visa card was used at the KLCC outlet of high-end fashion label Louis Vuitton on June 22, 2014.

In this trial, Zahid is facing 47 charges of criminal breach of trust involving millions of funds from charity foundation Yayasan Akalbudi, as well as bribery and money-laundering in relation to millions of ringgit.