Hindu temple in Ipoh vandalised, but cops have suspect

Deities in the Sri Maha Mariaman temple in Kampung Dusun, Bertam were been damaged by an Indonesian man. ― Picture via Facebook
Follow us on Instagram, subscribe to our Telegram channel and browser alerts for the latest news you need to know.
By JOHN BUNYAN

IPOH, Aug 17 — The Sri Maha Mariaman Temple in Kampung Dusun, Bertam was a wreck when Hindu worshippers entered the prayer hall and saw 15 deities smashed or in a broken heaps.

The sacrilegious vandalism looked like it could have been the work of a group, but police have zoomed in on one person they suspect to be the culprit.

“We arrested an Indonesian man at around 4.15am today,” Perak deputy police chief Datuk Lim Hong Shuan said in a statement today.

He added that a spanner, believed used by the suspect to damage the place, has been seized. 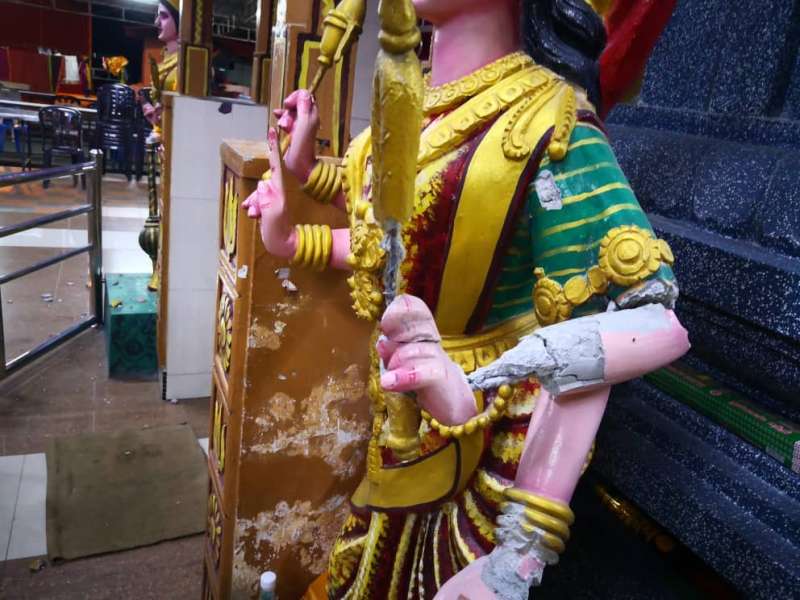 Police have arrested an Indonesian man who is suspected to be involved in the vandalism of the Sri Maha Mariaman Temple in Kampung Dusun, Bertam. ― Picture via Facebook

Police are investigating the case under Section 295, 427 and 448 of the Penal Code for defiling a place of worship, committing mischief by causing damage and trespass respectively.

He added that police are investigating the Indonesian suspect under Section 6(3) of the Immigration Act 1959/1963 for staying in the country without a valid pass or permit.

Lim advised the public to not make any irresponsible statements or speculation which can jeopardise the police investigation.