KUALA LUMPUR, July 23 — Last week, the Pakatan Harapan government tabled a Bill to set up an independent external oversight body of the police force, an initiative that has long been demanded by civil society to deal with allegations of police misconduct including custodial deaths.

The Bill is quite a comprehensive draft of the proposed law, with 38 pages covering 60 main provisions and explanatory notes to cover any possible issues that one might be able to think of.

Below is Malay Mail’s quick guide to the Independent Police Complaints of Misconduct Commission (IPCMC) Bill:

The IPCMC Bill will be called the Independent Police Complaints of Misconduct Commission Act 2019, or the IPCMC Act if it is passed as law.

The Bill is to set up the IPCMC and state its functions and powers, as well as what kind of complaints regarding the police would be handled and how these complaints would be investigated, and disciplinary proceedings to deal with misconduct and the punishments that can be meted out on errant police personnel.

The Bill lists five functions that the IPCMC will have, namely to promote integrity within the police force as well as to advise the government and recommend measures for such promotion of integrity; to protect public interest by dealing with police misconduct; to formulate and put in place mechanisms for the detection, investigation and prevention of police misconduct; and to “exercise disciplinary control” over the police.

The IPCMC’s powers include advising the government on the enhancement of the police’s welfare and well-being, and to audit and monitor police facilities, operations and procedures.

3. But who will scrutinise the police?

The IPCMC is to have 10 appointed members at maximum — including a chairman and deputy chairman, but with the condition that none of them is a current or former police personnel or a public servant.

The IPCMC members’ appointments by the Yang di-Pertuan Agong on the advice of the prime minister is for a maximum three-year term, and they can only hold the position for a maximum two terms in a row. The paid position is revocable by the Agong.

Being an IPCMC commissioner is a serious job which will be lost if one becomes bankrupt, becomes a federal or state lawmaker (MP or ADUN), or is convicted of an offence involving corruption, fraud, dishonesty or punishable with imprisonment or a RM2,000 fine, or is absent from three IPCMC meetings in a row without permission, or is of unsound mind or incapable of discharging one’s duties. 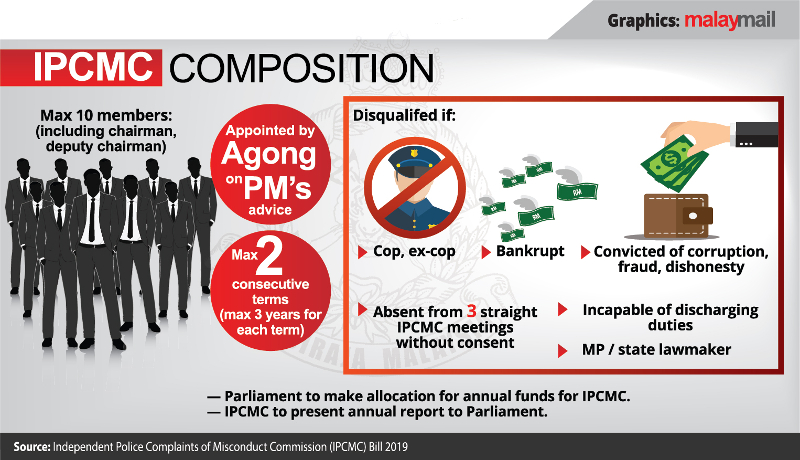 4. More than the IPCMC ten

Besides having up to 10 members, the IPCMC will also have appointed officers to carry out the work, including officers seconded from other government agencies to be investigators, or lawyers in private practice or those from the Judicial and Legal Service.

If you are being acted against or have been asked for information from someone claiming to be from IPCMC, you can ask them to produce their authority card — a card which will be signed by the IPCMC chairman and issued to IPCMC’s members and officers.

The IPCMC can also request to use the services of any staff or facilities of a government department or local authority or statutory authority, and also for help from any government officer or member of the police.

The IPCMC can also work together with and share information that shall be kept confidential to other enforcement agencies or state or federal government departments, while the police force also has the responsibility to co-operate and assist the IPCMC such as by providing information within their control or ability to obtain.

5. What can the public complain about?

Under Section 22 of the proposed law, the public can write in to the IPCMC’s Complaints Committee about alleged misconduct by the police, including actions or inaction that are:

But the action complained of does not include those already regulated under the Police Act’s Sections 96 and 97, including police regulations made by the Yang di-Pertuan Agong covering matters such as promotions, demotions, leave of absence, and administrative orders made by the Inspector-General of Police (IGP) via standing orders.

The IPCMC can on its own initiative start an investigation, if it is satisfied that the matter is of significant public interest or that it would be in the public interest to probe whether or not a complaint was made.

The police is required to refer to the IPCMC any incident which resulted in “grievous hurt” or the death of any person detained or kept under police custody.

The IPCMC has the power to visit police stations, lock-ups and detention centres and to make the necessary recommendations.

The IPCMC’s Complaints Committee will go through the complaints and decide on four categories that will determine where the complaint will be forwarded to for further action, or if the complaint should be rejected.

To make sure your complaints are not recommended by the Complaints Committee to the IPCMC for rejection, the complaint should not:

7. IPCMC’s powers to investigate the complaint

Once your complaint on alleged police misconduct has been referred to the IPCMC for investigation, what can it do?

The IPCMC actually has extensive powers to make sure co-operation is provided (by showing up or providing documents or a sworn statement with information) for its investigation into the complaint, as the proposed law will punish those who fail to co-operate with a maximum RM10,000 fine or two years’ jail or both.

8. What happens to the investigation results?

The IPCMC officer who conducted the investigations will pass the findings to the Complaints Committee.

The Complaints Committee will then have four options, including: refer the findings to MACC if corruption offences under the MACC Act are found; refer to other relevant authority if criminal offences under any other law are found; or refer to the IPCMC if findings show any misconduct in order to start disciplinary proceedings.

But if the finding does not show any misconduct, the Complaints Committee will record the findings.

The IPCMC will inform the person who made the complaint what action has been taken. 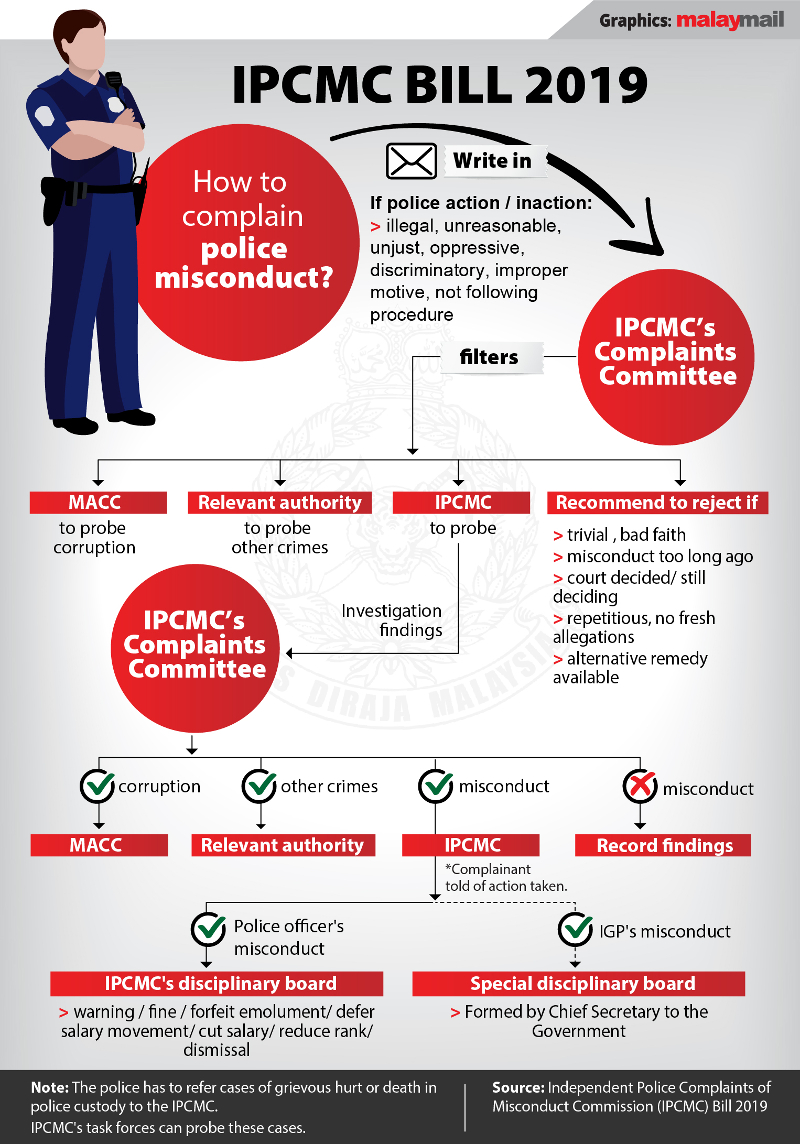 The IPCMC will set up a Disciplinary Board to deal with misconduct complaints against members of the police force.

The Disciplinary Board will be a five-man panel chaired by an IPCMC member, with the rest being two IPCMC members, the IGP or a police representative with higher rank than the accused, and a Police Service Commission representative who is not from the police force.

If the misconduct complaints are against the IGP, the Chief Secretary to the Government will form a Special Disciplinary Board to preside over the disciplinary proceedings.

The IPCMC will have the authority to impose disciplinary action on any member of the police force for misconduct found, including:

The IPCMC can also impose a surcharge on any police personnel that will be recorded in their record of service. (Under the Financial Procedure Act 1957, a surcharge is imposed on a government employee for financial-related failures such as improper payment of public money, failure to collect money owed to the government, destruction of government property).

10. Witness protection and other safeguards

With such a range of penalties on errant police officers possible, the IPCMC Bill outlines the protection for potential and existing witnesses, including by making it a crime for anyone who tries to block or uses threats to discourage a person from testifying before the IPCMC.

It will also be a crime to threaten, insult or injure anyone because they gave evidence before the IPCMC.

Both offences are punishable with a maximum two-year jail term or maximum RM10,000 fine or both.

If it appears that a witness or person helping IPCMC may be the target of intimidation, harassment or have their safety at risk, the IPCMC can make the necessary arrangements to protect them from such threats.

The IPCMC can direct the IGP or a public body to provide the protection or personnel or facilities to help in providing such protection, while anyone who contravenes the IPCMC’s orders to protect can be punished with a maximum RM10,000 fine or maximum two-year jail term or both.

Similar to contempt of court, anyone who disrespects, insults or threatens an IPCMC member commits contempt that is punishable by a maximum RM10,000 fine or maximum two-year jail term or both.

The IPCMC’s officials cannot be sued in court if they had acted in good faith, and evidence before the IPCMC will not be admissible in civil or criminal proceedings against those who complied with the IPCMC in good faith by giving evidence — including the giving of a sworn statement or document.

To ensure confidentiality, the proposed law will punish any IPCMC official or consultant or anyone disclosing information relating to IPCMC affairs unless authorised by the IPCMC or required for any civil or criminal proceedings. The penalty is a maximum RM10,000 fine or maximum two-year jail term or both.

The attorney general’s consent as the public prosecutor is required for any prosecution to be initiated in court for any of the offences listed in the IPCMC Bill. 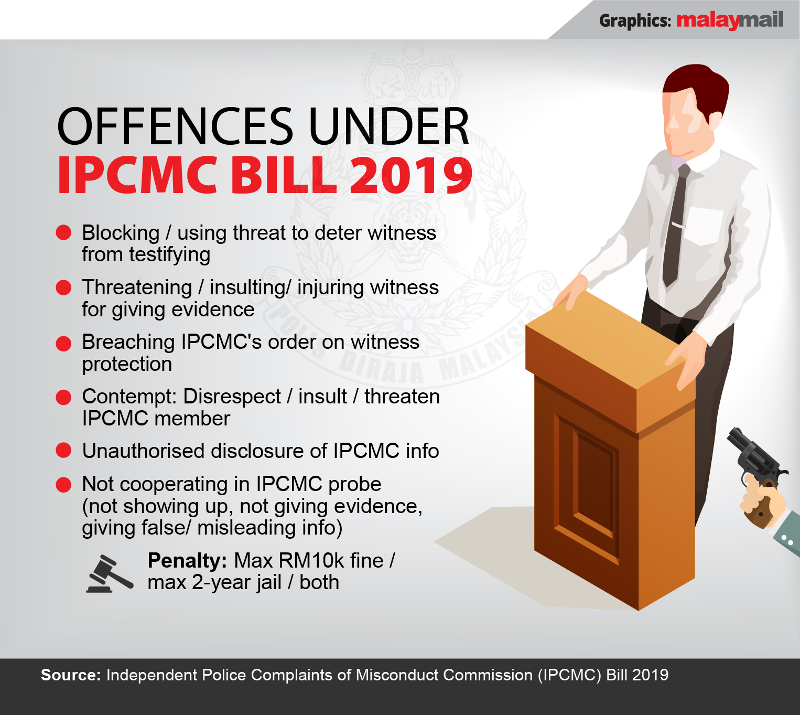 11. If you have conflict of interest, say it and stay out

The IPCMC Bill has strict provisions that appear aimed at fiercely guarding the IPCMC’s independence.

Other than not being allowed to have ever been in the police force, an IPCMC member must declare if they have an interest in any case under discussion by the IPCMC — whether it is a direct or indirect interest because of their family member or associate — and to then recuse themselves from being part of any discussion or decision-making on the misconduct case.

Any IPCMC officer or consultant with similar interest or connection to any police officer being probed for misconduct must also declare it, and not be involved in the IPCMC investigation for that case.

Parliament is to allocate adequate funds each year for the IPCMC.

The IPCMC will also table an annual report to Parliament listing its activities and the action it has taken on matters referred to it, with the report to be submitted at Parliament’s second meeting at the latest.

12. What will happen to the EAIC

This law will dissolve the Enforcement Agency Integrity Commission (EAIC) by repealing the 2009 law that established it.

Under the proposed IPCMC Act, EAIC officers will become IPCMC officers, while any pending complaint, investigation, finding or hearing regarding the police that the EAIC was handling will be handled by the IPCMC and completed within six months of the new law coming into effect.

All complaints, investigations, findings and hearings related to enforcement agencies other than the police — which the EAIC also handled — will be referred to the respective enforcement agency’s Disciplinary Authority.

The proposed IPCMC Act also states that all pending disciplinary proceedings on misconduct before the police’s Disciplinary Authority — prior to this Act becoming law — will continue.

13. Ok, when will this IPCMC Bill become law?

Minister Datuk Liew Vui Keong tabled this Bill at the Dewan Rakyat for first reading on July 18, with the Bill expected to be debated and voted on in the next parliamentary meeting in October.

It will only become law if it is passed by both the Dewan Rakyat and Dewan Negara, and granted royal assent by the Yang di-Pertuan Agong and will only come into effect on a date to be fixed by the prime minister that will be announced via a government gazette.