‘Penang: Then and Now’: Unique book featuring photos of the island from a century ago

A copy of Marcus Langdon’s ‘Penang, Then And Now’ is pictured at Avenue Mall, George Town July 2, 2019. ― Picture by Sayuti Zainudin
Follow us on Instagram, subscribe to our Telegram channel and browser alerts for the latest news you need to know.
By OPALYN MOK

GEORGE TOWN, July 6 — There was a time when tongkangs and sampans clamoured for space around the harbour in Weld Quay here as workers unloaded goods from the boats to carts lining the street.

In what was once among the busiest ports in then-Malaya, boats used to ferry goods to and from ships anchored further out while carts, pulled by coolies, waited next to the harbour shed for business.

Electric passenger trams would trundle down the street and one can almost hear the hustle and bustle of the harbour just by looking at a black-and-white photograph of Weld Quay dating back to 1909.

Today, the sea where the tongkangs and sampans had anchored is gone, replaced by a bus depot and the ferry terminal further out.

This is but one of the 115 sites in Penang showcased in Marcus Langdon and Keith Hockton’s latest book titled Penang: Then & Now, A Century of Change in Pictures.

The book has over 250 pages of images and compares the old Penang to its current state, with snippets of historical facts about each site featured.

The duo also held a photo exhibition titled “Then & Now” during the 2016 George Town Festival and, since then, have been compiling more images to come up with this book. 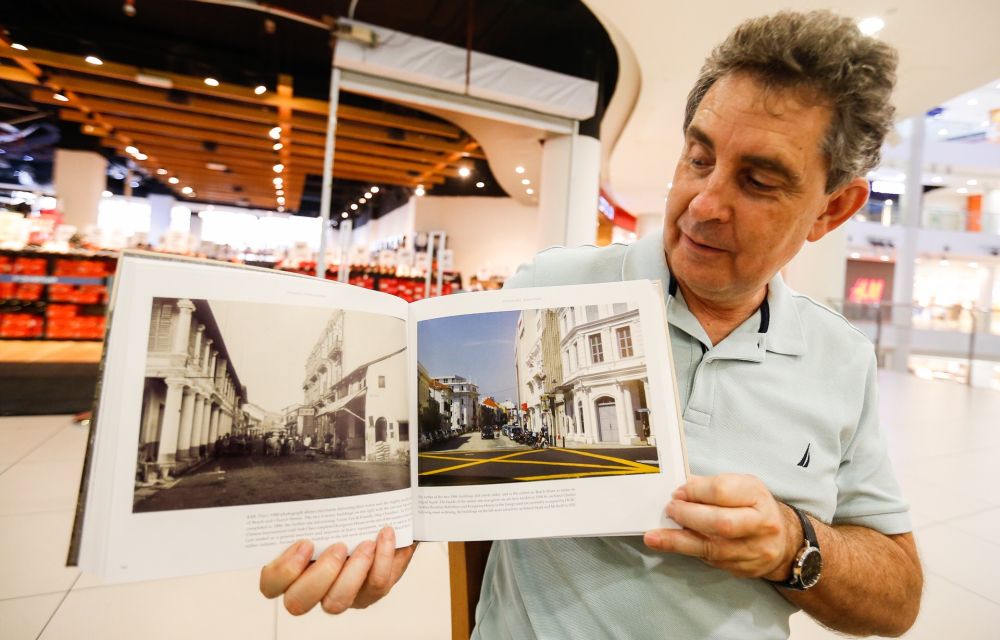 Marcus Langdon holds up a copy of ‘Penang, Then And Now’, during an interview with Malay Mail in George Town July 2, 2019. ― Picture by Sayuti Zainudin

Langdon, a historical researcher, has been collecting old images of Penang for over five years and amassed over 2,500 images.

In the book, an old image of a site is juxtaposed with a current one, with both from the same angle, for a side-by-side contrast of the changes over the century.

“I hope to shock Penangites and make them understand better what they’ve lost,” he said.

He said the images will make people realise the importance of the Unesco World Heritage site listing and what Penang could have looked like if heritage conservation had been done sensitively.

“I really hope developers and the authorities will look at this and realise the importance of these streetscapes,” he said.

He said tourists flock to Europe because of beautiful streetscapes that are centuries old and this is something Penang could also enjoy.

The book is divided into five sections: Section 1 on The Waterfront concentrating around the Weld Quay area; Section 2 on Beach Street that concentrates around the current banking district; Section 3 on The Esplanade that explores the field, Fort Cornwallis, Town Hall and the former Cricket Club there; Section 4 on various George Town streets; and finally, Section 5 covers notable buildings and sites outside the inner city.

A look at the waterfront reveals that Weld Quay is not the original shoreline of the island but was actually reclaimed. 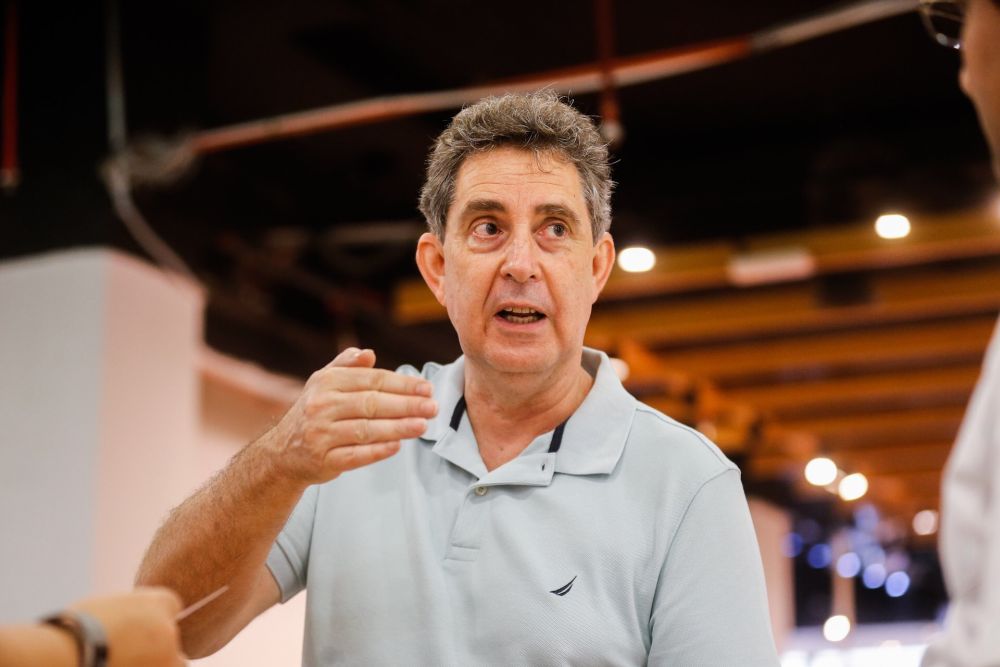 Marcus Langdon, author of ‘Penang, Then And Now’, speaks to Malay Mail during an interview in George Town July 2, 2019. ― Picture by Sayuti Zainudin

According to Langdon, the reclamation and construction of buildings on the reclaimed land took place in the late 1800s.

While there had been illegal reclamation by merchants then to make it easier to transport goods, the Straits Settlements government finally reclaimed the seafront to form Weld Quay between 1883 and 1889.

The harbour was named after Sir Frederick Weld, who was the Governor of the Straits Settlements between 1880 and 1887.

Over at the Esplanade, one particular image, taken in 1910, stands out as it shows off the Queen Victoria Memorial Clock Tower and a grand 1890s government complex behind it.

These grand buildings are reflected in the moat of Fort Cornwallis. The moat was filled in in 1922 and the government complex was destroyed during Allied bombings in 1945 but the clock tower remains to this day.

In the inner city of George Town, while some of the rows of shophouses remain unchanged, some were demolished and replaced with newer modern buildings.

Over at Bishop Street, between King and Penang Street, there used to be a Church of St Gregory the Illuminator built by Armenian merchant Catchatoor Galastaun in 1824.

Due to the diminishing Armenian population then, the church closed in 1906 and was eventually demolished in 1910; a commemorative monument to the church was later erected in its place.

Langdon showcased a hand-painted image of the monument, which was torn down in the mid-1930s, and today, a modern bank building stands in its place.

Copies of the book are now available at all major bookstores and can be purchased online at the publisher’s website.