Datuk Lokman Noor Adam and Datuk Mutalif Abdul Rahim (right) wait outside a courtroom at the Kuala Lumpur Court Complex March 28, 2019. — Picture by Firdaus Latif
Follow us on Instagram, subscribe to our Telegram channel and browser alerts for the latest news you need to know.
By By Syed Jaymal Zahiid

All four were charged under Section 323 of the Penal Code for voluntarily causing hurt. The charges were read together with Section 149 of the same law that makes all participants of an illegal assembly jointly liable for any offence committed.

Separately, Umno supreme council member Lokman was also charged under Section 426 of the Penal Code with causing mischief when he tore up a cut-out placard of Datuk Seri Najib Razak in clown face make-up that belonged to one of the students.

All four claimed trial. Bail was set at differing sums, with Lokman's amounting to RM9,000 in total.Earlier this morning, the Umno supreme council member accused Attorney General Tommy Thomas of selective prosecution, claiming the charges brought against him were driven by partisan interests.

“Today I am the victim of Tommy Thomas' selective prosecution,” he wrote on his Instagram page.

“The DAP stool who made the provocation by carrying a caricature cut-out placard of DS Najib in clown face... is not charged instead even when the Court had decided that the illustration is offensive and provocative.” 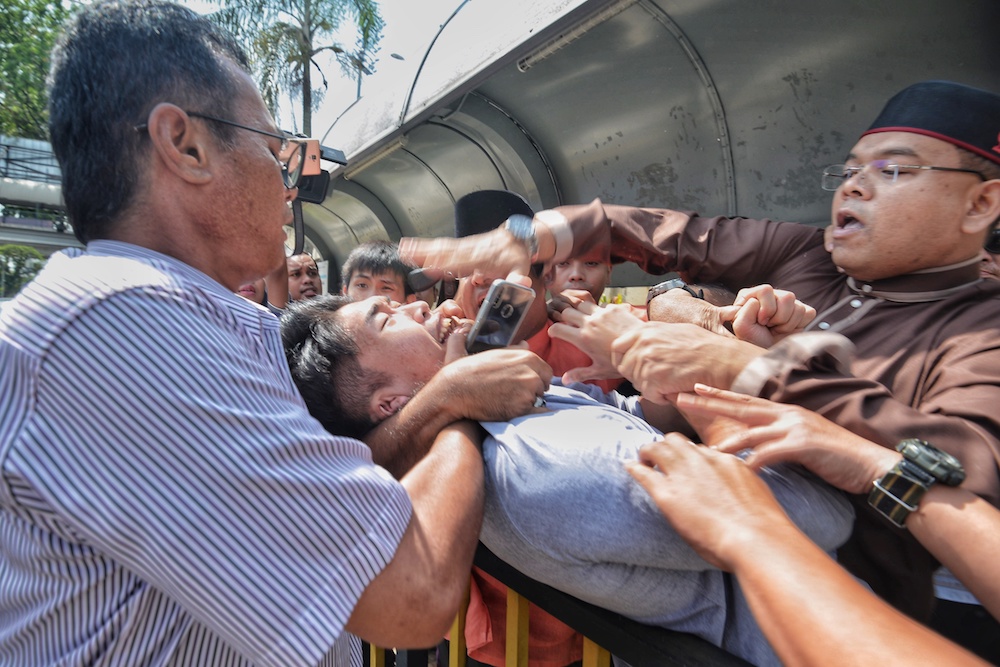 Last Friday, a group including Lokman confronted around seven students who protested against former prime minister Najib during a talk he held with supporters near Universiti Malaya’s grounds.

Lokman and several others were caught on video behaving aggressively towards the students when they refused to put down the placards they carried.

The clown-face caricature of Najib was made by popular by activist and artist, Fahmi Reza, who was sentenced to a month's jail for the illustration.

Lokman had admitted to tearing up the placard last Friday, but claimed he did it to protect the student from the wrath of a pro-Najib mob.

He also maintained that tearing up the cut-out poster was within the law since the Court had decided the drawing was offensive.

The Sessions Court has set May 16 for hearing.