KUALA LUMPUR, Sept 22 ― Seven Malaysian universities have made the cut for the Times Higher Education (THE) World University Rankings 2016, ranking among this year’s top 980 best varsities.

But Singapore universities remain the best in Asia as they bagged the top 100 list.

“Malaysia invests a huge amount in higher education and has marketed itself as a knowledge economy and innovation hub in recent years. However, the nation’s public universities have been hit by a 15 per cent budget cut this year, after the economy came under pressure from lower oil and commodity prices.

“Universiti Teknologi MARA, for example, that dropped to the 801+ band this year, faces a cut of over 23 per cent,” THE World University Rankings editor Phil Baty said in a statement.

“Malaysia must ensure that it continues to make higher education a priority if it is to succeed in its ambition to create world-class universities,” he added. 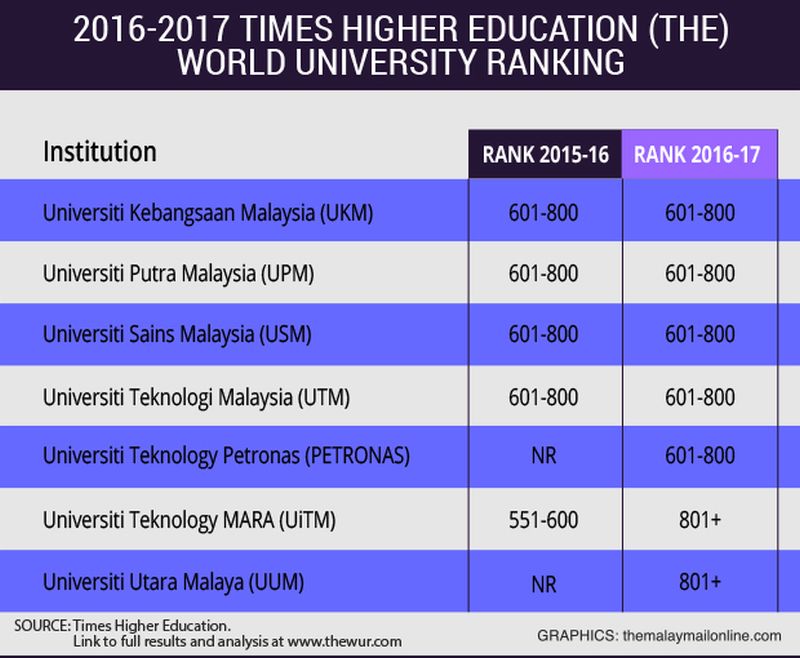 Comparatively, Singapore universities continue to dominate the top 100 list, with The National University of Singapore (NUS) at 24th place and Nanyang Technological University in 54th place.

“But the star of the region is Singapore, which is home to Asia’s top university for the second year in a row. The National University of Singapore (NUS) is at 24th ― its highest ever rank. NUS is joined by the 35-year-old Nanyang Technological University in 54th place, also its top ever position; the university has risen 120 places since 2011.

“However, institutions in Thailand, Malaysia and Indonesia have fallen in this year’s list due to increasing competition in the table; there are 180 new places in this year’s ranking making it the most competitive table to date,” Baty said.

In total, 21 universities from Southeast Asia made this year’s THE rankings, up from 15 last year.