Sabah abductions since 2000: A timeline

File picture showing Sabah Police Chief Datuk Hamza Taib (right) and Sabah Head of Criminal Investigation SAC Omar Mamah showing photos of the location of an abduction in Lahad Datu, May 6, 2014. — Bernama pic
Follow us on Instagram, subscribe to our Telegram channel and browser alerts for the latest news you need to know.

KOTA KINABALU, Sept 19 — The following is a list of abductions in Sabah in over a decade before the formation of the Sabah Eastern Sabah Security Command (ESSCom) and since its establishment in 2013

Oct 5 — 3 Indonesians and 3 Filipinos from Borneo Paradise Eco Resort Farm were abducted — One later died, one was rescued and the remaining released.

March 30  —3 Indonesian from Bonggaya 91 tugboat taken, near Mataking Island,  Semporna. All were released.

May 6 — Chinese national Yang Zailin taken from a fish farm in Pulau Baik, Lahad Datu. He was rescued 63 days later.

July 12 — Marine Police Ab Rajah Jamuan was shot dead while colleague Kons Zakiah Aleip was abducted while on duty at on Mabul island. Zakiah was released after 8 months.

July 19 — Esscom imposes sea curfew from 6pm to 6am. Curfew was later extended and changed to 7pm to 5am.

May 14  — Restaurant manager Thien Nyuk Fun and patron Bernard Then  kidnapped from Sandakan seafood restaurant. Thien was released after 6 months but Then was beheaded.

April 1  — 4 Sarawakian Malaysians on the MV Masfive 6 tugboat en route from Manila to Tawau, abducted near Ligitan island in Sabah. All were released 3 months later. 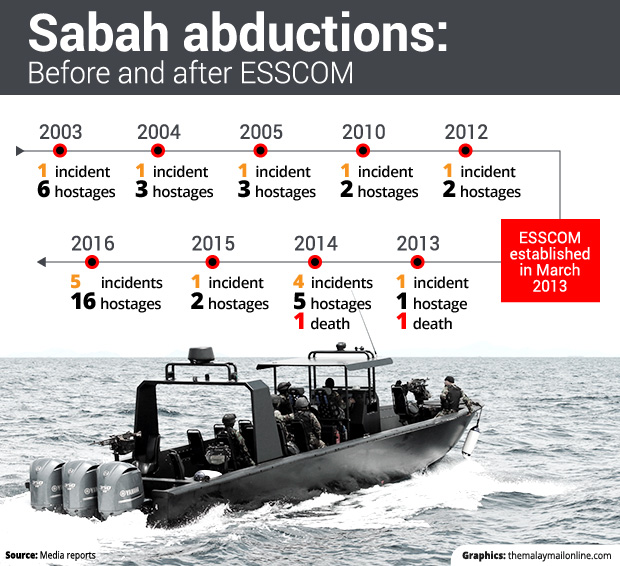