Rising costs of essential goods take a toll on consumers

KUALA LUMPUR, Jan 20 — Following the price increases in a number of essential commodities, The Malay Mail team observed that their cost varied from place to place.

Prawns cost between RM12 and RM30 per kg at the Jalan Othman market.

However, consumers were being charged RM68-RM88/kg at the Taman Tun Dr Ismail market.

The checks also revealed the prices of vegetables had increased but there was no change for poultry and seafood.

The prices of vegetables fluctuated because of poor supply and weather conditions, while seafood prices varied according to the demand of consumers.

The rising cost of logistics had also contributed to the increase in the prices of goods.

The market stallholders said they were forced to charge consumers more because wholesale prices had gone up.

As a result of the increases, consumers preferred to look around before buying.

They were aware that prices vary at different locations, leaving them to make the smarter choice when buying their provisions.

Market traders feel like they are caught in the middle between the consumer and the supplier as the prices of goods fluctuate, forcing them to charge customers accordingly.

A trader from Selayang, who declined to be named, said the prices of seafood and poultry were stable but the prices of vegetables depended on available stock.

“I have no choice but to charge RM10/kg for red chillis and RM5.50/kg for tomatoes,” she said.

“Customers don’t usually feel the pinch, because I do not charge them too much.

“I absorb as much as I can because it is not fair to sell goods at higher prices.”

Thirty-year veteran Chow Kit trader Tan Kim Sui said: “The price of kangkung has gone up to RM3.50/kg from RM2.50/kg after the announcement of its price reduction a few days ago.”

A “Mr Chang” said prawn prices had gone up tremendously in the past two years because many fishermen had opted to export them to China.

“This has affected supply, which caused the prices to go up,” he said.

He said he expected prawns to cost a few ringgit more next week because of Chinese New Year.

Fishmonger Tang Ah Teck said the price hikes would not drive people away from buying seafood.

“It is normal for Chinese to buy seafood for Chinese New Year. The king prawn (meng har) will still the first choice.”

Butcher Zambri Shahbhari said the price of beef had risen by RM2-RM4/kg, from RM14 to between RM16 and RM18.

He said his business had seen a 20 per cent drop, adding that most of the customers shopped around several markets before making their purchases.

Grocer Mustajzun Rahman said the prices of vegetables were stable compared to seafood and other food items, noting that cucumber prices had dropped by 50 sen.

Consumers have to shop around

Consumers said they were left with no choice but to pay higher prices for their provisions.

Security guard Zainal Abdul Hamid, 54, of Kuala Lumpur, said: “Prices do fluctuate but even so, what choice do I have? I still have to buy the necessary for my family.”

However, Zainal said his expenditure had increased only by a small margin.

N. Ramesh, 48, a father of three, said: “Certain goods are cheaper while prices of other goods have increased.

“I can afford to pay a little bit extra but what about the lower income group?

“I live in Pantai Dalam but I have been coming to Raja Bot market for the past 14 years because it is cheaper here compared to everywhere else.”

Ramesh hoped prices would not increase for Chinese New Year.

In Petaling Jaya, Richard Teoh said: “Prices for every necessity item have gone up drastically in the last few weeks.

“This has forced me and my wife to visit several markets before making purchases.”

He noted that silver pomfret would cost RM80/kg at the SS2 market, while it was RM65/kg at TTDI market.

“We are forced to fork out RM300 a week to buy these food items,” Teoh said, where previously he only spent RM150-RM200 a week.

Salmia Beddu, 31, a lecturer, said she and her family would prefer go to the pasar tani to buy vegetables and meat, where they are cheaper and fresher than at the market.

She said her expenditure had increased by RM50 to RM100 in the past two weeks. 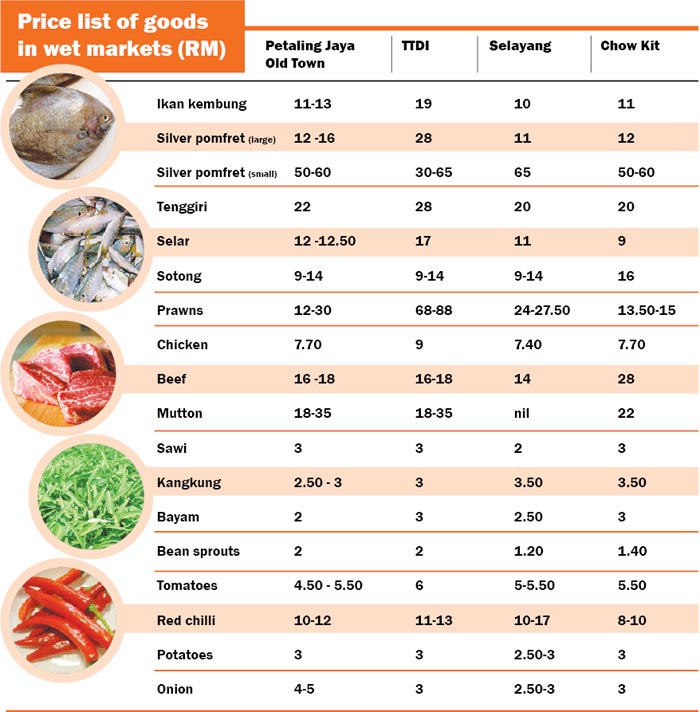