The condoms pay homage to an iconic Indonesian comfort food. — Picture via Instagram/fiestacondoms
Follow us on Instagram, subscribe to our Telegram channel and browser alerts for the latest news you need to know.

PETALING JAYA, March 29 — Condom brand Fiesta has taken love for instant noodles to new heights with the launch of their mi goreng-flavoured rubber in Indonesia.

The brand revealed the product on their social media pages yesterday, sharing photos of the item’s packaging inspired by the beloved instant noodle brand Indomie.

“Discover the sensation of love-making with the distinct taste of Indonesian spices,” Fiesta wrote on one of its promotional images.

The brand also paid tribute to Indomie’s “addictive” quality in its caption, writing, “One is not enough, two is still insufficient.”

Some social media users suspected that the flavour is part of an April Fools marketing stunt due to the release date being suspiciously close to April 1.

Nevertheless, Fiesta wrote in the comments section of its Instagram post that the mi goreng-flavoured condoms can be bought online from official DKT Indonesia e-commerce stores.

The noodle-inspired condoms are currently sold out on Shopee, where a pack of three retailed for 5,000 rupiahs (RM1.43). 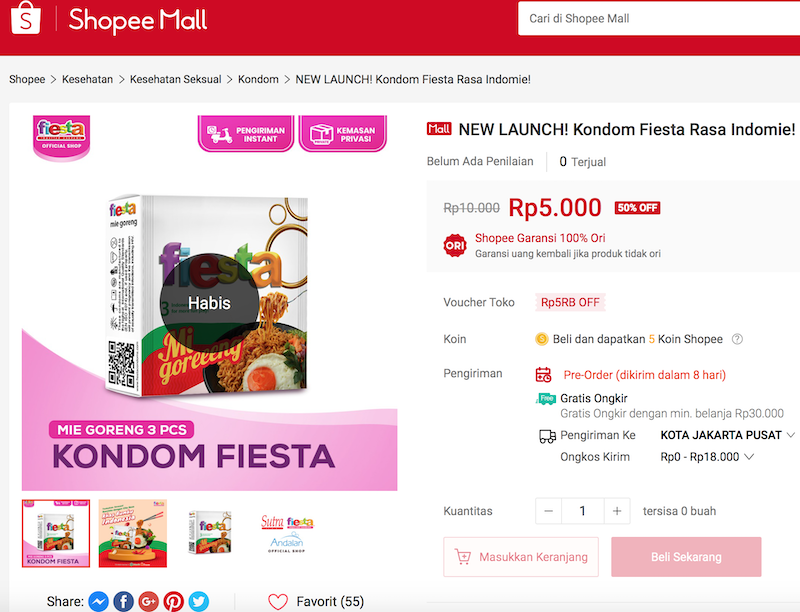 The condoms were snapped up by customers on Shopee Mall shortly after its launch yesterday. — Screengrab from Shopee Mall

One Instagram user jokingly cautioned users to be careful with the condoms as the “spicy” flavour could cause unwanted sensations in one’s private parts.

“So spicy it could cause irritation (down there),” wrote @herman.oey.

Other users also brought up ideas for more Indonesian-inspired condom flavours, such as sate padang and es podeng.

Fiesta unveiled two other products in their launch yesterday which were iced coffee-flavoured condoms and another chilli-flavoured variant.

The brand has experimented with other creative flavours in the past as well, including condoms tasting of durians, energy drinks, and more.