Azrin said that he is happy that people have reacted positively when seeing him in his uniform. ― Picture via Facebook/Latun Noralyani
Follow us on Instagram, subscribe to our Telegram channel and browser alerts for the latest news you need to know.
By MARK RYAN RAJ

Sadly, like many pilots around the world, Azrin was recently retrenched by his company Malindo Air, as more than 2,000 employees lost their jobs last week due to the impact of the Covid-19 pandemic.

“The company has to downsize operations and costs to stay afloat and unfortunately I was one of the people it had to let go,” said Azrin in an interview with Malay Mail.

Azrin has worked with four different airlines, starting off his career as a pilot in 2000 with Malaysia Airlines before joining Firefly in 2007.

He then spent a short stint in Jakarta with Lion Air before moving on to Malindo in 2015.

While he won’t be able to don his pilot uniform to fly through the skies just yet, Azrin has found another use for his outfit when he caught the eye of social media users by greeting customers in full pilot gear at his newly-opened food stall called “Kapten Corner” in Subang Jaya. 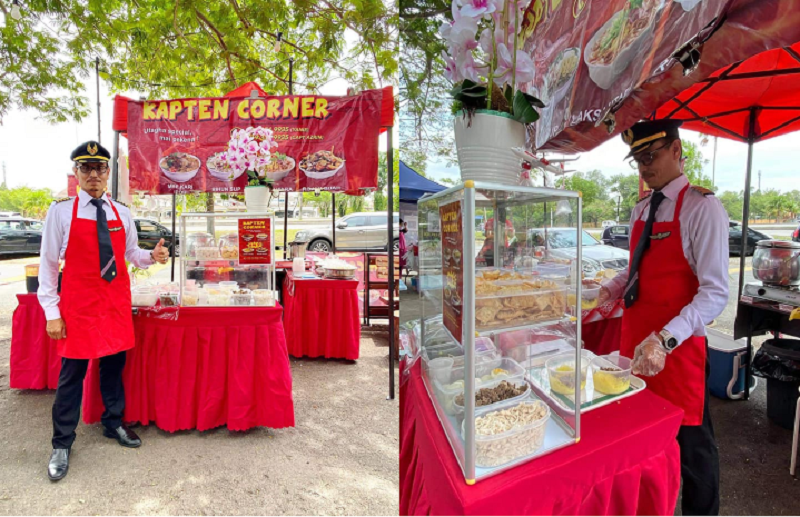 Azrin said that his uniform has been a hit amongst his customers. ― Picture via Facebook/Mohamad Zawawi Ahmad

The father-of-four also said that he wasn’t too upset about being retrenched as he already planned to venture into the food business with his wife Latun Noralyani Meor Aminudin.

After Azrin consulted his father, he decided to open up the stall as a means to make up for his loss of income.

“I’d say I’m still pretty lucky and happy compared to most. My wife came up with the idea to start up our own food stall and we began our business just a week before I was retrenched,” said Azrin.

“We were already making a transition or change in our life, so it was kind of the right time for it to happen.”

Azrin also said that his mother-in-law is the head chef while his wife Noralyan, brother-in-law and himself man the Kapten Corner stall located in Boomtown, USJ11, selling delicious Northern meals such as curry mee, bihun soup, laksa utara and rojak buah.

The 44-year-old, who lives in Shah Alam, added that he initially didn’t wear his pilot uniform to man the stall but is thankful that he did, as he’s gone somewhat viral on social media because of it.

“When we first opened two weeks ago, I wore casual clothes and my customers kept asking me where my uniform was. They had a point. My stall is called ‘Kapten Corner’ after all,” said Azrin.

“They kept asking me to wear it so my wife convinced me to put it on and then I had no choice,” he joked.

Although he’s thankful for the steady business and positive feedback he’s received so far, Azrin said that he is still getting used to his new line of work and the very little free time available to him. Azrin said that his customers have loved the food so far. ― Picture via Facebook/Latun Noralyani

“My wife has experience in this business. She’s been doing this for a long time but this is all still very new to me,” he said.

“I’m occupied all the time basically. I can’t relax or hang out with friends. I don’t have time to spend with my four kids who are at home now because school is closed.

“Every day, I wake up early, go to the market, come home prep the food together, then go to set up the stall. We finish around 10pm, go home and head straight to bed. That’s my life at the moment.”

Azrin also said that he hopes his pilot uniform and delicious food can continue raking in customers as he hopes to make the most out of his new career.

He added that he also aims to upgrade his Kapten Corner stall into a restaurant ― if things go his way ― but with hard work and determination, the sky’s the limit.

Zahid claims ‘threatened’ in 2018 for refusing to dissolve Umno, says was charged in court five months after becoming Opposition