Elaine Daly, a former Miss Universe Malaysia titleholder who is the pageant’s national director said a winner’s responsibility to spread goodwill does not end when their reign is over. — Picture from Instagram/Elaine Daly
Follow us on Instagram, subscribe to our Telegram channel and browser alerts for the latest news you need to know.
By MELANIE CHALIL

KUALA LUMPUR, June 2 — Miss Universe Malaysia Organisation (MUMO) national director Datin Elaine Daly expressed shock over comments by 2017 winner Samantha Katie James’ remarks on Instagram over US race protests “to the black people” calling them to “relax and take it as a challenge”.

Daly told Malay Mail that James’ remarks were “horrendous” and her actions have tarnished the image of MUMO.

“It has affected the pageant’s reputation but I hope people see beyond that — this is just one girl who has made a statement like this.

“She’s affiliated with us because of the title but we no longer represent her, we have really nothing to do with her anymore actually.”

Daly added that MUMO distanced itself from James since June 2018 after James opted out early of what was meant to be a three-year contract.

“I did not expect this especially three years down the road after she finished her reign with us for us to get this kind of backlash,” she said.

Daly, a qualified lawyer who was crowned Miss Malaysia Universe 2003 said the pageant prides itself on empowering women, giving them a platform to have a voice as well as offering  access to education through scholarships.

“It’s not about putting a girl in a bikini and it’s not just having a pretty face there.

“It’s giving you a pedestal, a voice to speak out about the right things, not the wrong things like what she (James) has done.

“She has not done the right thing at all, I’m shocked,” said Daly.

Racism is not ok. Trying to explain away racism is not ok. Asking people to suck it up and get over racism is not ok. People of colour in the USA deserve the space to express their outrage at not just the death of George Floyd, but centuries of slavery, racism and oppression. #blacklivesmatter

James, who is of Malaysian Chinese-Brazilian parentage was lambasted online for posting a series of controversial remarks pertaining to race protests that have erupted throughout the US over the death of George Floyd who died after a white police officer knelt on his neck for over eight minutes.

James’ many remarks which have invited criticism from Malaysians and made headlines internationally, also included her saying African Americans “chose to be born as coloured (people) in America.”

In one of her posts, James, who was raised by a Malaysian-Indian family, said that she identifies as a white person.

“You are Malaysian, what do you mean white?” said Daly.

“She’s not white. If we tick the race box, she’s lain-lain but she’s Malaysian.”

In multicultural Malaysia, people of Eurasian heritage fall under the racial category of lain-lain, the Malay word for ‘others’.

“When people ask me what my race is, I say I’m Malaysian, full stop,” she said.

“I don’t say my dad is Eurasian, my mother’s Chinese.

“If people ask me I’ll explain but I’m not white just because my surname is Daly which is an Irish surname.”

Following James’ social media posts yesterday which drew the ire of Malaysians and the global community, more than 10,000 people have signed a petition demanding the 25-year-old’s crown and title to be revoked.

But Daly isn’t sure if that can happen.

“Her contract with us is over and this is unprecedented.

“Nobody has ever won a title and been stripped of it, I don’t know what the legal consequences are so it’s not so easy just to say ‘Okay, I strip you of your title’, there’s so much that goes into it.”

Daly said the pageant’s parent organisation in the US contacted MUMO to alert them on the matter after receiving complaints from the public via email.

“You’re carrying an important title which you will carry for the rest of your life and it’s something that you need to hold up high with dignity as all of us have done over the years.

“We still maintain our same direction and instill good values in our girls but unfortunately, some are just not as perceptive as others.” 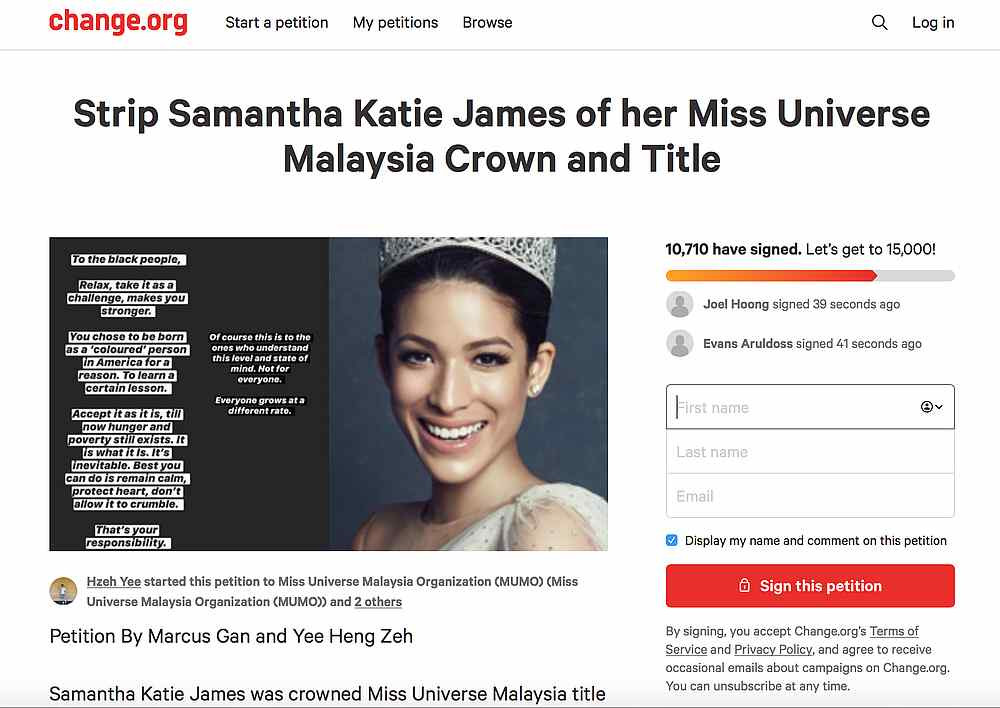 More than 10,000 people have signed a petition demanding James to be stripped of her Miss Universe Malaysia title. — Screengrab from Change.org