Caitlin Tang was inspired to start her waffle-making project after reading about the struggles faced by animal shelters due to the Covid-19 pandemic. — Picture from Facebook/IAPWAPenang
Follow us on Instagram, subscribe to our Telegram channel and browser alerts for the latest news you need to know.
By TAN MEI ZI

PETALING JAYA, April 29 — Caitlin Tang may be only 11-years-old, but she has been dedicating her spare time during the movement control order (MCO) to raise funds for animal shelters.

She does so by cooking up mouthwatering waffles and delivering them to customers in Tanjung Tokong and Tanjung Bungah, Penang.

The young animal lover has managed to raise RM2,364 since kickstarting her home business on April 19, SAYS reported.

Tang, 11, was inspired to help after reading a newspaper article about how animal shelters in Malaysia were struggling to feed their four-legged occupants due to the MCO.

“I’ve had lots of time to experiment with making desserts during this MCO. One day, I made waffles and decided to give some to my neighbour.

“He commented on how yummy they were and told me I should sell them... And that’s what I did! I can now get funds to donate to the shelters,” she was quoted as saying.

The budding entrepreneur even designed her own flyers and worked on the prices for her home business.

She explained that she had taken a class on entrepreneurship in school and knew that marketing was key to get her operations off the ground. 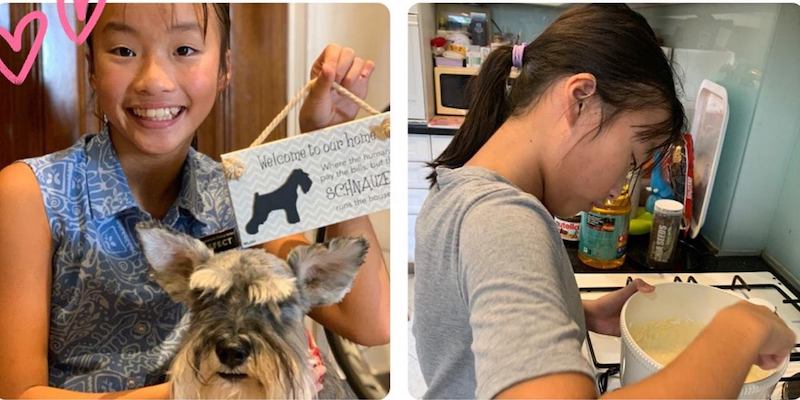 The 11-year-old has been hands-on with every aspect of the business, from cooking the waffles to designing the flyers herself. — Picture from Facebook/IAPWAPenang

Her father Charles Tang, a technopreneur well-versed in the world of e-commerce, also provided assistance with setting up a website for his daughter where customers can browse through a menu and arrange for delivery or pick-up.

“During this MCO, I got to spend a lot more time with my little girl since I’m working from home.

“I had more time to explain to her about what I do and discuss how Covid-19 is affecting people around us.

“When she told me about her idea of setting up shop so that she could raise funds to help the animal shelters, I told her to go for it!” he said.

The father-daughter duo started off by selling to residents in their apartment block and received three orders for eight waffles within an hour of Caitlin’s website going live.

Since then, she’s managed to raise more than RM2,000 and has donated the funds to animal shelters like International Aid for the Protection and Welfare of Animals (IAPWA) Penang and the Penang Animal Welfare Society (4PAWS).

The younger Tang said she was surprised at how supportive people have been towards her business, adding that one customer even added a generous tip that allowed her to surpass her fundraising goals.

“The most sales I’ve had in a day was 12 orders for 46 waffles. But the craziest thing was when one of my customers decided to give me RM1,000 instead of RM28 for eight waffles!

“Thanks to him and other customers, we’ve managed to raise so much more money than expected.”

In a Facebook post, IAPWA Penang expressed gratitude for the youngster’s efforts and hoped her project would inspire others to lend a helping hand to furry friends across the country.

“With encouraging parents and supportive people, Caitlin managed to raise and donate a whopping RM500 for our trap, neuter, and release fund today, besides donating to another no-kill shelter.

“We are very thankful for this additional help during such trying times. We hope young Caitlin can also inspire others to do something good and contribute to the animal causes too,” read the post.