KUALA LUMPUR, Nov 19 — What’s more Asian than soy sauce? Indeed for many, what defines a truly Asian dish — be it a platter of Hokkien mee full of wok hei, or a bowl of hot rice topped with organic natto — is the indispensable addition of soy sauce.

Which makes it easy for us to neglect this unassuming sauce and take it for granted. After all, it’s everywhere, so what’s the big deal?

Shirley Chia strongly believes there ought to be more of a fuss about soy sauce. As the third generation of a family of soy sauce makers, she has staked her claim in the industry by starting Mu Artisan Soy Sauce, a small batch producer of handcrafted, additives-free soy sauce. 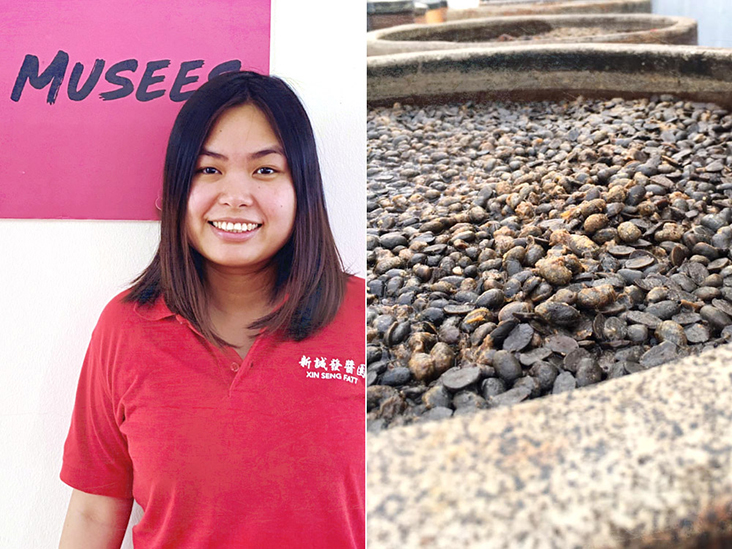 You might think she was born into it but Chia had to travel a different path to get here; she was a banker first and foremost.

After working in the banking sector for over a decade, Chia decided she needed a change in her life. She recalls, “Growing up I imagined myself as a corporate person; without my previous job, I wouldn’t be who I am today. But about four years ago, I reached the point where I was longing for something meaningful and more satisfying.”

In order to grow and go further, Chia realised she had to look back. In this case, it was her family’s traditional soy sauce business. These days soy sauce production is a massive, commercial affair but back then, every bottle was handmade in small batches. 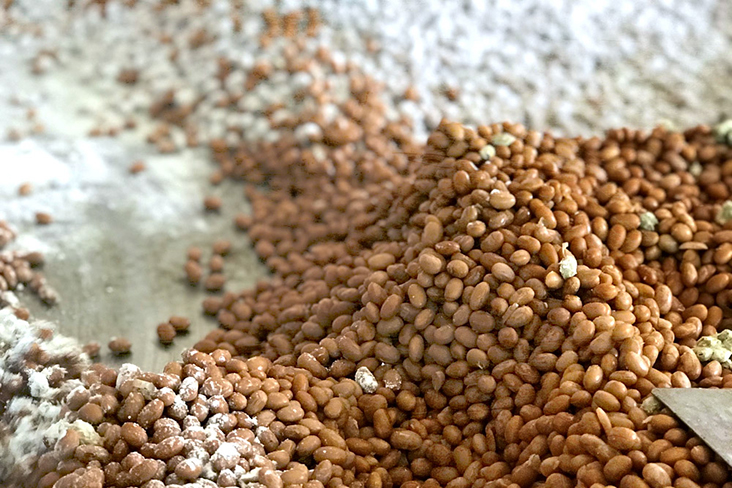 Chia describes Mu Artisan’s approach as brewing soy sauce with soul and a strong focus on integrity and passion for the product. She adds, “We are what we said, non-GMO (genetically modified organism) beans and organic ingredients, no mixing, no added chemicals like taste enhancers, food flavourings, colourings and preservatives.”

Mu Artisan differs from other soy sauces in the market through their production processes: they remain small batch crafted, using clay brewing urns and natural fermentation under the sun for nine months.

Such an approach requires intensive labour and land capital, not to mention plenty of patience to brew soy sauce traditionally. Chia muses, “We can appreciate artisan coffee, bread and wine so why not soy sauce? Being the third generation in a soy sauce brewing family, I see my parents working hard to keep the business going. I know the younger generation has to step in, to modernise and preserve for the generations to come.” Chia prioritises the safety and well-being of her production staff, ensuring none are laid off even during tough times.

Each brewing urn at Mu Artisan has its own specific number to record the fermentation schedule. She explains, “This way, it is traceable and transparent. Customers are kept informed of the fermentation urn number and the bottle number of each bottle of soy sauce.”

After nine months of fermentation, each urn produces about 80-100 bottles of first layer sauce. Mu Artisan’s First Draw Soy Sauce contains only 100 per cent first extraction of soy sauce, with a full body taste, rich aroma and a punch of sweetness. Perfect as a dip or for drizzling on cooked dishes.

The company has also been actively diversifying their product lines, with an eye to create a new market segment of speciality soy sauces.

Chia says, “We also have a gula Melaka soy sauce where we cook pure gula Melaka with soy sauce. It’s a perfect balance of salty sweetness enriched with the sugary fragrance of palm sugar. Good as toppings on desserts as well as coating on grilled dishes.”

Learning is in Chia’s bones, as she has attended various workshops and travelled extensively to find out more about the craft of soy sauce making. 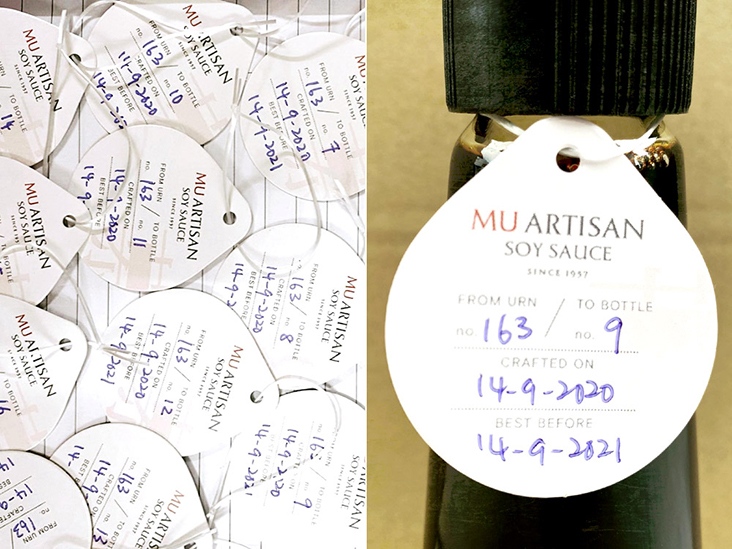 While the company is still relatively young (Mu Artisan celebrates its second anniversary in January), Chia notes that they are not inexperienced. She says, “The brand is new but the recipe and operation are not. Starting Mu Artisan which is not a conventional grocery soy sauce has been the biggest change for an old operation like us.” 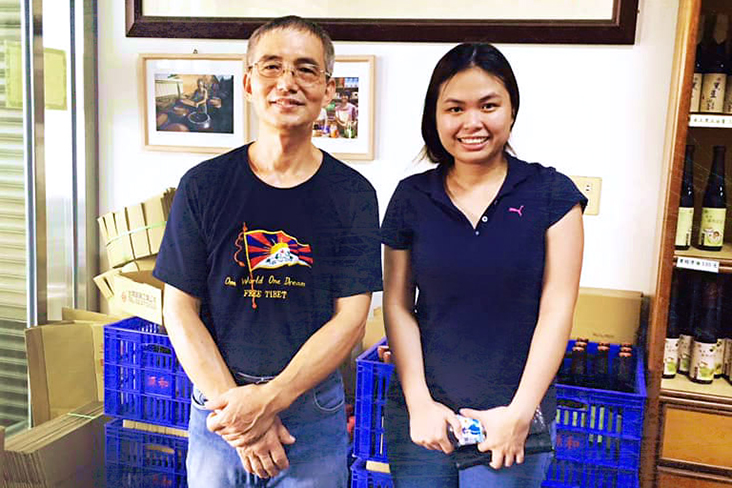 Shifting a commonplace product into the speciality market, a niche one at that, can be terrifying. Chia admits she initially had low confidence about whether Mu Artisan would work. She was careful and conservative with every step she took with her fledgling business.

“Once I began to open up to tell our story — the process behind it, the team involved, our struggles – I found that there are many who appreciate our truthfulness. We are far from perfect but they are willing to support us with their genuine suggestions and generous buying to keep us improving.” 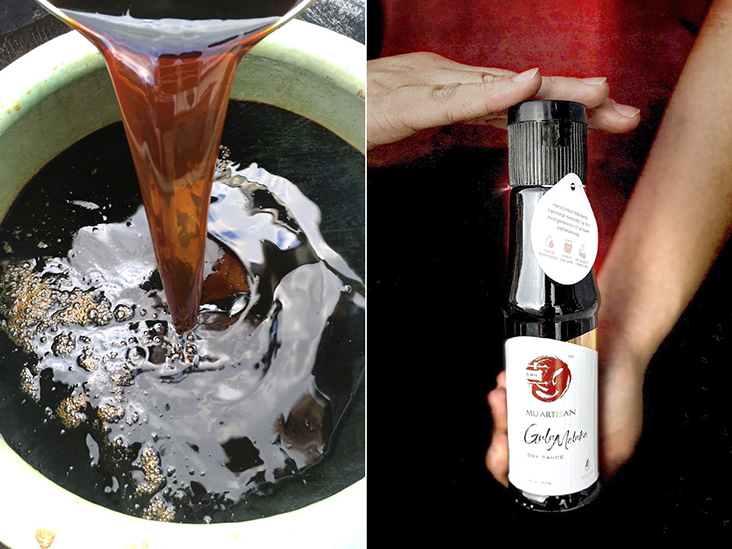 She insists on prioritising her staff: “For us the first thing and last thing is to retain everyone in our team – no lay-offs and no salary reduction. Instead we pivoted our resources from serving B2B (business-to-business) to B2C (business-to-consumer) as restaurant demand is decreasing while more stay at home to cook.”

Moving forward, Chia is optimistic about the space available for Mu Artisan to grow and position as a strong, homegrown brand. She says, “We are striving to be the soy sauce that represents Malaysia with creativity and local elements.”