The war in Ukraine: A silent assault on the developing world ― Antonio Guterres

APRIL 14 ― For the people of Ukraine, the Russian invasion is a waking nightmare, and a humanitarian disaster on a terrifying scale.

But the war is also fast becoming a matter of life and death for vulnerable people around the world.

We have all seen the tragedy unfolding inside Ukraine: cities flattened; people suffering and dying in their homes and in the streets; the fastest displacement crisis in Europe since the Second World War.

But beyond Ukraine’s borders, far beyond the media spotlight, the war has launched a silent assault on the developing world. This crisis could throw up to 1.7 billion people — over one-fifth of humanity — into poverty, destitution and hunger on a scale not seen in decades.

Ukraine and the Russian Federation provide 30 per cent of the world’s wheat and barley, one-fifth of its maize, and over half of its sunflower oil. Together, their grain feeds the poorest and most vulnerable people, providing more than one-third of the wheat imported by 45 African and least-developed countries.

At the same time, Russia is the world’s top natural gas exporter, and second-largest oil exporter.

But the war is preventing farmers from tending their crops, while closing ports, ending grain exports, disrupting supply chains and sending prices skyrocketing.

Many developing countries are still struggling to recover from the effects of the Covid-19 pandemic, coupled with historic debt burdens and soaring inflation.

Since the start of 2022, wheat and maize prices have increased by 30 per cent.

Brent oil prices have risen more than 60 per cent over the last year, while natural gas and fertilizer prices have more than doubled.

The United Nations’ own lifesaving operations are under severe strain. The World Food Programme has warned that it faces the impossible choice of taking from the hungry to feed the starving. It urgently needs US$8 billion to support its operations in Yemen, Chad and Niger.

Some countries are already sliding from vulnerability to crisis and serious social unrest. And we know the roots of many conflicts lie in poverty, inequality, under-development and hopelessness.

But while much of the world has stepped up in solidarity with the people of Ukraine, there is no sign of the same support for the 1.7 billion other potential victims of this war.

We have a clear moral duty to support them, everywhere.

The Global Crisis Response Group on Food, Energy and Finance that I launched last month aims to develop coordinated solutions to these interlinked crises, with governments, international financial institutions and other key partners. I thank the global leaders in all sectors who are supporting this initiative.

On food, we are urging all countries to keep markets open, resist hoarding and unjustified and unnecessary export restrictions, and make reserves available to countries at the highest risk of hunger and famine.

This is not the time for protectionism. There is enough food for every country to get through this crisis if we act together.

Humanitarian appeals must be fully funded, including for the World Food Programme. We simply cannot allow people to starve in the twenty-first century.

On energy, the use of strategic stockpiles and additional reserves could help to ease this energy crisis in the short term.

But the only medium- and long-term solution is to accelerate the deployment of renewable energy, which is not impacted by market fluctuations. This will allow the progressive phase-out of coal and all other fossil fuels. 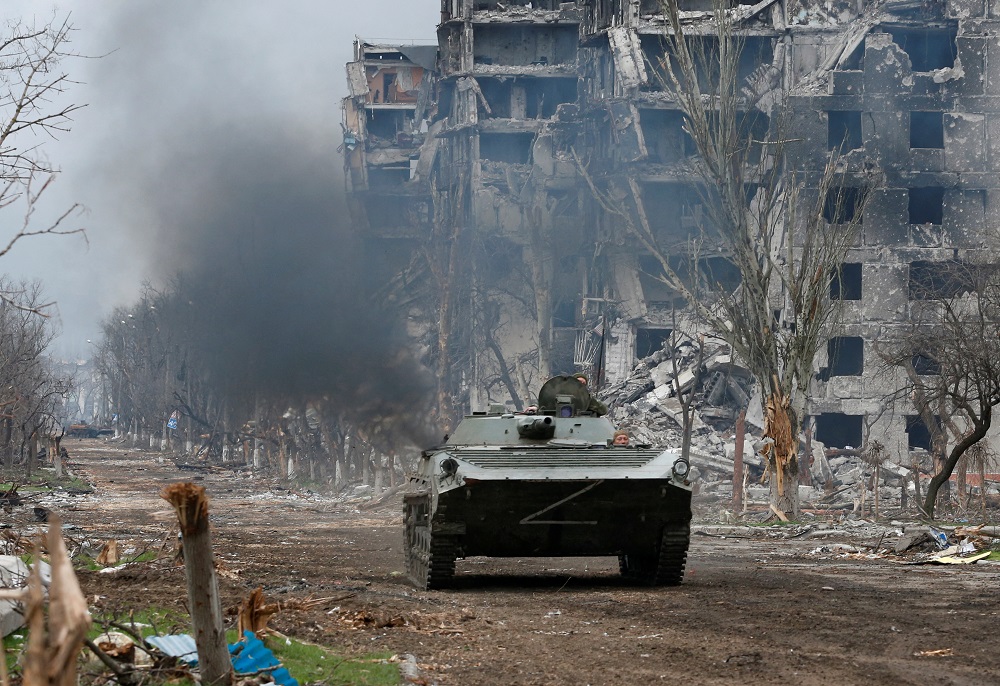 Service members of pro-Russian troops ride an armoured vehicle during fighting in Ukraine-Russia conflict near a plant of Azovstal Iron and Steel Works company in the southern port city of Mariupol, Ukraine April 12, 2022. ― Reuters pic

And on finance, the G20 and international financial institutions must go into emergency mode. They must find ways to increase liquidity and fiscal space, so that governments in developing countries can invest in the poorest and most vulnerable, and in the Sustainable Development Goals.

This should be a first step towards deep reforms to our unfair global financial system, which makes the rich richer and the poor poorer.

Social protection, including cash transfers, will be essential to support desperate families through this crisis.

But many developing countries with large external debts do not have the liquidity to provide these safety nets. We cannot stand by and watch, as they are forced to choose between investing in their people, and servicing their debt.

The only lasting solution to the war in Ukraine and its assault on the poorest and most vulnerable people in the world is peace.

As the United Nations works to support the innocent victims of this war — both inside and outside Ukraine — we call on the global community to speak with one voice and support our plea for peace.

This war must end, now.

* Antonio Guterres is the Secretary-General of the United Nations.