The band paid tribute to Lemmy on their Facebook page, with a post stating that he was diagnosed with an aggressive form of cancer on December 26 and was at home with his family when he died.

They requested fans “play Lemmy’s music LOUD. Have a drink or a few. Share stories. Celebrate the LIFE this lovely, wonderful man celebrated so vibrantly himself.” 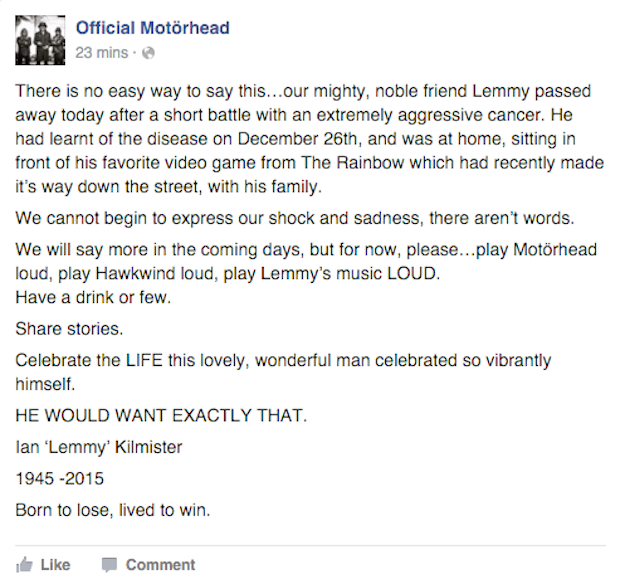 Music website Consequence of Sound said that news of his death was first reported by radio and TV host Eddie Trunk, who was a longtime friend of Lemmy.

Tributes have started to pour in from the metal world’s luminaries, including Ozzy Osbourne who tweeted: “Lost one of my best friends, Lemmy, today. He will be sadly missed. He was a warrior and a legend. I will see you on the other side.”

Lost one of my best friends, Lemmy, today. He will be sadly missed. He was a warrior and a legend. I will see you on the other side.

Oh my. Lemmy got let in on the big secret. One of the greatest rockers of all time. Amazingly unique incredible bass player. My hero. Wow.

drink a toast to this guy, one of the last true legends of rock 'n roll. Ace Of Spades. motorhead. https://t.co/Lh0Nl9hDTY via @YouTube

Over the years, Lemmy had battled serious health issues, forcing him to scale back on his alcohol and tobacco habits.

In 2013, he was fitted with an implantable defibrillator to correct an irregular heartbeat.

Lemmy was lead vocalist, bassist, principal songwriter and the founding and only constant member of Motorhead since the band’s formation in 1975.

Growling, whiskey-drinking, mutton-chops wearing Lemmy was famous for always turning his amplifiers up to the maximum, for positioning his microphone above his head so that he had to sing looking upward, and for his anthems to hellraising such as Motorhead’s classic “Ace of Spades.”

To date, the band have released 20 studio albums and achieved 30 million in sales worldwide.