Another year of luck in this land blessed with Chinese

Thursday, 27 Jan 2022 8:22 AM MYT By Praba Ganesan
Follow us on Instagram, subscribe to our Telegram channel and browser alerts for the latest news you need to know.
By Praba Ganesan

JANUARY 27 — What to do with the Chinese?

When the lunar calendar rotates back to start point, and families ready for reunions, the usual question resurfaces. It is one question which predates our nationhood —perhaps it defines our nationhood.

This column contemplates seasonal Chinese political support, exclusion from educational opportunities, axing CNY holidays, how building names eschew them and even the infamous Botak Chin, among others because the management and engagement of the community sets the tone for the country. For better or worse.

So asked, are they guests or partners?

But why the Chinese and not others? Throughout the 20th century, ethnic Chinese possessed both numbers and resources, inexorably pitting them as the obstacle to Malay leadership and domination of Malaysia in all fields of play.

The Malay right milked it silly for votes. If we do not gang up, they’ll eat us alive and leave our children nothing. In the aftermath, those campaigns built walls of mistrust among lower income Malays towards the Chinese.

And the walls remain decades later.

As the Chinese population percentage shrinks, fellow countrymen should ask, is Malaysia better with the Chinese around?

Both are, unsurprisingly, rhetorical questions. For Malaysian Chinese are equals under the Constitution and our lives are richer because of them. It’s the circumspection from the questions which helps clarify how vital they are to our national identity.

Then why the apprehension? 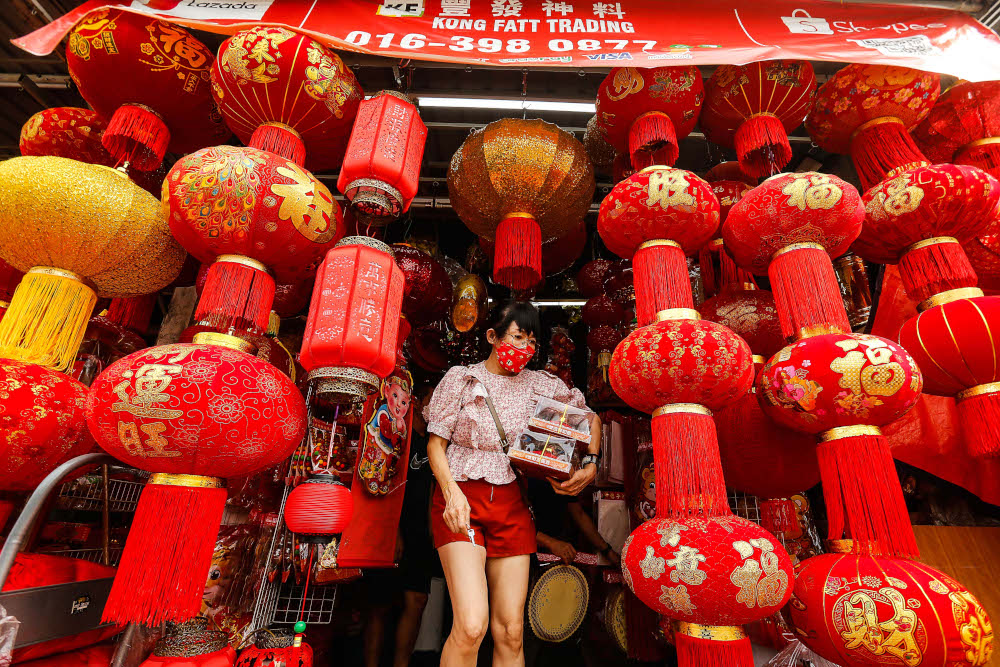 A customer looks at lanterns in preparation for the upcoming Chinese New Year celebration at Lebuh Carnavon in Penang January 24, 2022. — Picture by Sayuti Zainudin

The Chinese are more insular than not. The insularity is self-propagated by community leaders, part caused by cultural prejudice and part brought upon them by others.

They persist with language protections on selfish grounds and demand their differentiated academic qualifications be recognised. Chinese controlled industries and supply chains reek of anti-competition and discrimination. We take care of our own is given a literalist treatment.

However, from the other end of the equation, they live in degrees of fear, never free of it. How can they rise above with courage when they are the perpetual bogeyman for all Malay problems, as narrated by the right? The right is the right, all mad and senseless, but when the political elites ignore madmen’s transgressions to protect their own political interests, then the fear has weight.

Not a day goes by without the Chinese being blamed for Malay woes openly. It offers ammunition to the isolationists to argue for separate lives for the community, for everyone’s benefit. And to tell Timmy to stay on in London after he completes his medical degree.

The situation frustrates and no overnight solution exists. What is necessary to begin the reconciliation is for negotiators to enter the fray without bias, not to use the process to undermine any side.

For example, to speak about the need for a single public school system by ending Chinese as a medium while not demanding other competing structures prohibiting that single system, for instance religious and boarding schools are not rationalised, is offensive. Sacrifice is a two-way street.

Or to claim expertise in Malay by virtue of 11 years of schooling only to revert to Chinese in an SME committee meeting because “most of us are Chinese in this room and we are better at expressing our views in the vernacular.”

All those who fail the good faith test should be taken to task. Or at least, shamed.

The history textbooks do undermine the contribution of Chinese to our development. Kuala Lumpur’s who founded it debate continues between fans of Sutan Puasa and Yap Ah Loy, but there’s no contest until the 1980s the capital was essentially a Chinese city.

How then to disassociate the critical role of the Chinese in the city? If the city building, road, school and monument names were totalled up, the evident absence of Chinese names is palpable. It falsely suggests the Chinese were nominal contributors.

Similarly, a presentation of the high numbers of Chinese among the Communist bandits without juxtaposing it with the numerous Chinese in the armed forces and police — Special Branch especially — fighting for their country is disingenuous. Or the social cost of the Briggs Plan, forcing Chinese from their homes to new villages simultaneously causing social upheaval till today.

History is rarely straightforward or objective but the degree of subversion to fit a political narrative is too strong to overlook. It hits all in the forehead of our moral compass.

Corrections are long overdue and it is up to the next generation to fix it. To do what is right.

Still for those in the present, the past is a good teacher but it cannot turn and enslave us to a different time, a different thinking. Not anymore. Remember the past, constantly learn from it but stop living in it.

Recent events give hope. The Lee Zii Jia altercation with BAM, from a race relations perspective underlines how Malaysians are coming into their own as Malaysians.

Nationals of all races, not the least Malays, came out to support the top badminton player. So too the emphasis on the just departed national football coach Ong Kim Swee’s legacy — he was mostly judged for what happened on the pitch and not how his name is spelt.

We are growing, we are a young nation and slowly, only too slowly finding comfort in our collective skin. Thanks to race obsessed politicians it has taken longer, it has been more arduous. And these louts stand ready to run interruption whenever possible.

The willingness of the younger generation to adhere to emerging global trends of fairness and inclusivity will shape the journey of Malaysia’s multiculturalism, not the least the place of the Chinese.

A country of families

My office is next to a slew of maternity and children’s private clinics. Every day, couples and families, many Chinese walk to and away with partners in arm or carrying a child.

However, no mind reading device was necessary to know what’s on their mind. To understand only requires us to see them as members of families. Therefore they are thinking about family.

They are not mere statistics or demographical data, they are people.

They are survivors of the pandemic, children of the nation.

To the initial question, what to do with the Chinese?

There is nothing to do to them. You can always do something for them, that would be polite.

Talk to them if they want to talk, and listen to them, and in time they’d listen to you, just like most people.

How to feel about the Chinese in Malaysia? Feel good about it. Yeah, that. If you want to be a little more Malaysian and little less bigoted, try to feel blessed that you have so many types of people in this land, not the least the Chinese.

Happy New Year. I have playing cards in my car. I think. Feeling lucky already.