Well... the voters are to blame

A barrage of social media comments and commentaries ensue. One dude in a WhatsApp group full of professionals declares “time to vote out such politicians.”

As if he just discovered penicillin and Malaysia just needs the right dosage to rid a fatal disease. Voila!

The temptation is high to decry Deputy Minister of Communication and Multimedia Zahidi Zainul Abidin’s opinion. After all it’s unacceptable in 2020, blaming voters for prevailing problems.

Predictably, up and coming Covidball Z cartoonist Ernest Ng caricatured the perceived transgressor. The comic depiction: The Umno man is thumped to the ground by the fist of public opinion. 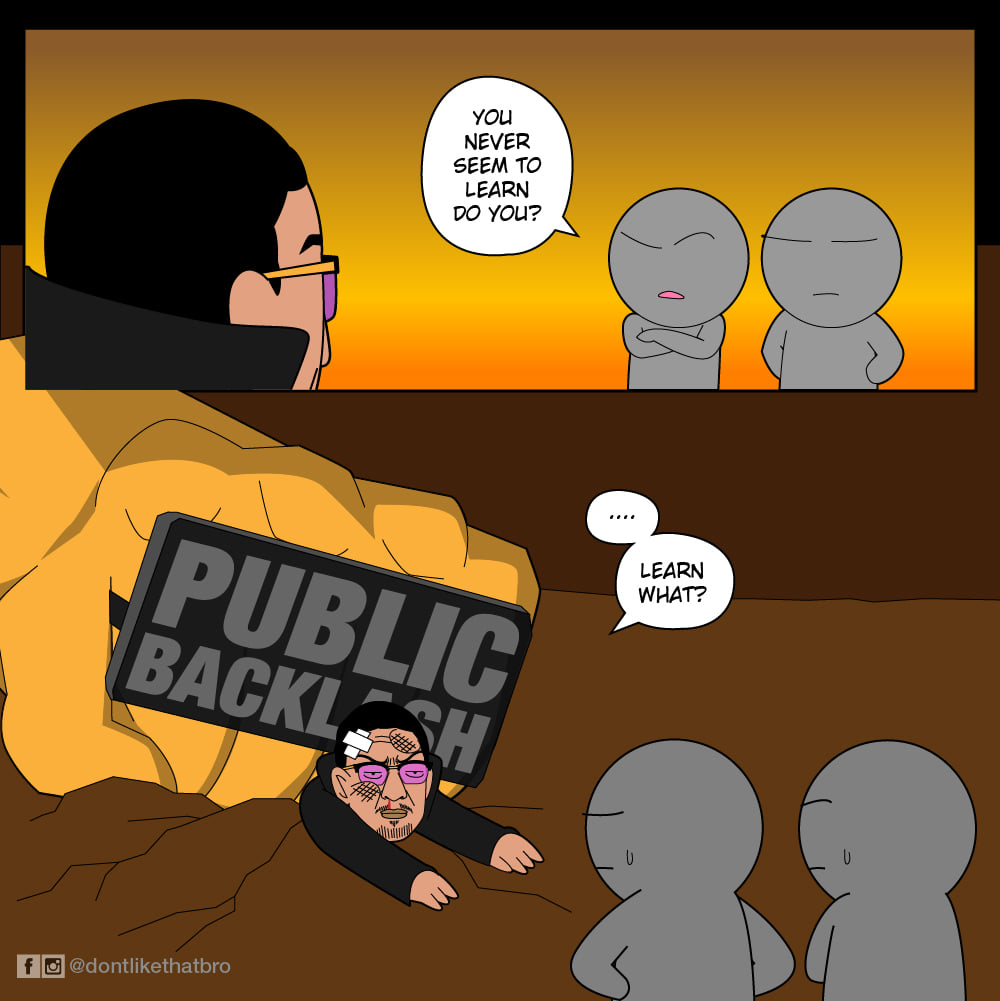 Is he? Has he truly been smashed and awaits a horrible political end?

Certainly not. The opposite is, in fact, true.

Zahidi hardly has sleepless nights because Netflix viewers in Taman Tun are disappointed with him.

The ministry’s driver navigates him from meeting to meeting, and everything is quite hunky dory inside the plush interior of the official vehicle with juice and crackers on hand.

From where he sits, it must seem like winning. Because if that’s losing, many of us would want to lose too.

His place at the table comes via his Padang Besar parliamentary seat, one of Perlis’ three seats. Here’s the awful news, Zahidi is set to win easy again. He might even make full minister.

His only fear? Umno president Zahid Hamidi does not name him as candidate. Which is why he can’t care for the English speaking middle-class, and why he mouths standard party lines like “Malaysian voters would be insane to consider life without Umno.”

This is not the first time the deputy communication and multimedia minister has courted controversy. His graduate school qualification was put into doubt and he also falsely accused Veveonah Mosibin of lying about Internet connectivity in her Sabah hometown.

All the criticisms do not faze him. Since being carved up in 1995, Padang Besar’s a safe Umno seat.

Amin has years as student leader, think tank researcher, author and translator, and later founded LEAD Think Tank, all of which mean little when opposed by Muafakat Nasional in Perlis.

Calm and collected Amin to collapse, and Zahidi to triumph despite his vitriol.

Such trends are readily apparent elsewhere.

Further south in Perak, at a different field of play, Padang Rengas hosts one of the most colourful MPs, Nazri Aziz. MP since reconstitution 16 years ago. Four straight election victories despite every and any lewd or aggressive public comments. Some say he just speaks his mind, others surmise he doesn’t need to care, he’s covered in Padang Rengas.

While it’s valid to interrupt and point to the unjustifiable seat malapportionments—  where it takes five Padang Besar for one Bangi —  or gerrymanders, the politics is determined by the rules set, as unfairly as they seem.

Even if that’s ignored, Zahidi’s right to somewhat to blame voters.

Not in that they voted the wrong side but that they do not care as much about the situation.

Whether this is due to voters’ historical disconnect to power, or outreach failure by democracy organisations such as the one I am linked with, or the allure of identity politics overwhelming all other considerations including self-interest, matters less.

Our voters — pay close attention to voter distribution and their power weightage— do not care as much as pollsters claim they do.

Which makes it incredible politicians want to regain the people’s mandate from those who seemingly stole it from them.

Such a grand robbery, and hardly anyone outside urban enclaves bothers!

General Election 2018 yielded a result, and it was a fortunate mix of vote splits allowing a new government to form, with one Borneo ally. A simple fragile majority.

During the reign, the people had cursory interest in government, and reciprocally the government was not keen to draw people into the democratic process.

The people did complain, as they do, and the leaders cut the ribbons, and enjoyed the occasions as they do in return.

But it was no insurrection, no bold charge to empower the millions.

Granted it takes a long time to germinate democratic ideals and people are selfish.

So, when the government fell, it was news. But not critical to the people’s lives.

They did find it amusing, though. Bossku, court cases and Internet memes.

Malaysians have a transactional relationship with the government, not a philosophical one.

But in the nine months since, pretenders have continued to step up to save the people. Opinion polls keep asking Malaysians who should be PM.

The question they do not ask as a follow-up is, “Would the respondent give up five hours of labour weekly so their preferred choice triumphs”? Campaign for him — email, call friends and family, set up social media platforms and raise a flag outside their residences.

If people had to pass a litmus test to choose a PM, they wouldn’t bother.

The column is not asking for a test but does want to emphasise the need to play down ad hoc opinion polls.

This notion that a sacred mandate was stolen and now needs recovery is fictitious.

So, please. There is no restoration, there is only political negotiation.

The people are to be blamed.

Even if some people are real believers and are out there doing all kinds of phenomenal things to make society better, including our politics.

For politics is a numbers game, and right now Zahidi Zainul and gang have them.

Is he morally suspect, for positing a nasty line from his bully pulpit? Yah. That’s not even on trial.

We’ll dispense with the layered analyses and ask the simple: How do the unqualified, uncaring and uncouth rise through victories in general elections, and secure high positions to mock the masses, if they did not get the voters’ blessings?

And if it is through votes, then those who gave them the votes are surely to be blamed. Forget Bukit Bintang, think Pasir Salak.

Accept this predicament, tone down the invectives and work — or direct your funds — where the change has to happen to hurt someone like Zahidi Zainul. At the polling booths where his name is on the ballot. Being glad you vote in Segambut doesn’t change a damn thing.