An aerial view of thick smoke billowing as the fire on the Pulau Burung landfill in Penang continues, January 17, 2022. — Picture by Sayuti Zainudin
Follow us on Instagram, subscribe to our Telegram channel and browser alerts for the latest news you need to know. 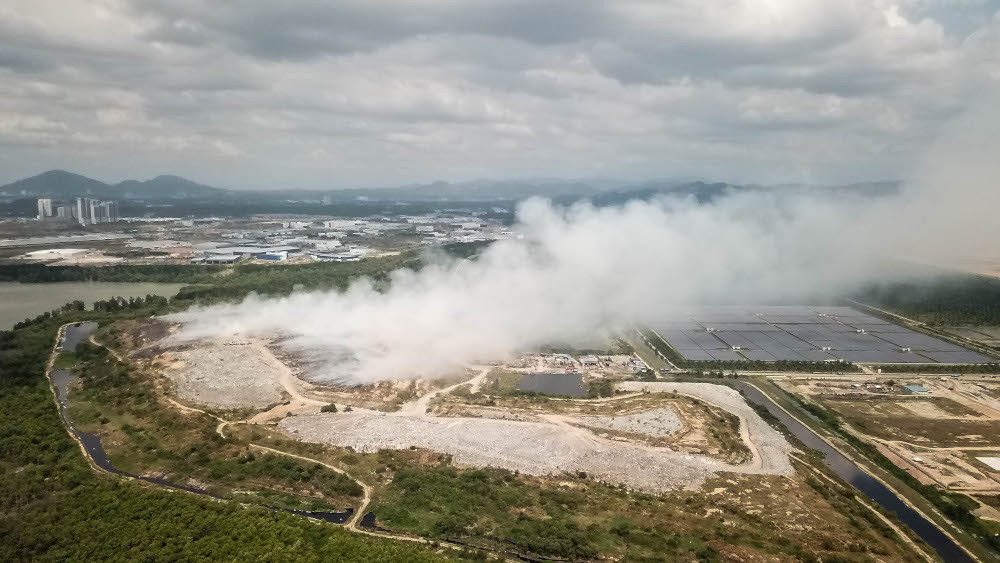 The Pulau Burung landfill was declared a level one disaster area based on the National Security Council (MKN) No. 20 directive after the fire there polluted the surrounding area and posed a risk to health. — Picture by Sayuti Zainudin

NIBONG TEBAL,  Jan 21 — The Penang Department of Environment (DOE) has opened two investigation papers (IP) against the management of the Pulau Burung landfill, Jalan Byram here, in relation to the fire at the site since last January 12.

Its director, Sharifah Zakiah Syed Sahab said apart from investigating the incident, the department was also monitoring air pollution in the area.

Investigation against the management company of the Pulau Burung landfill was conducted under Section 29A and Section 34A of the Environmental Quality Act 1974, which is for open burning and its compliance with the Environmental Impact Assessment (EIA), respectively,  she said when met here today.

The Pulau Burung landfill was declared a level one disaster area based on the National Security Council (MKN) No. 20 directive after the fire there polluted the surrounding area and posed a risk to health.

The 16.19-hectare landfill was reported to have caught fire at 5pm last Wednesday and it had yet to be completely extinguished until today.

According to Sharifah Zakiah, this was not the first time the Penang DOE had taken action against PLB Terang Sdn Bhd, which is the company that managed the landfill.

“The Penang DOE had issued 14 notices to the company and apart from that we have also issued two compounds against the company for open burning,” she added.

Meanwhile, she said there was a slight increase in air quality readings in the nearby areas outside the Pulau Burung landfill.

She said the Penang DOE had sent a team to monitor the situation, as well as to detect any pollutants in the form of gas and dust released from the landfill.

“The air quality readings have shown some improvement and we are monitoring. So far, the fire-fighting operation using the water bomb method since two days ago has shown positive development,” she added. — Bernama