Family Frontiers president Suriani Kempe hands the #TarikBalikRayuan petition to Foreign Minister Datuk Saifuddin Abdullah outside the Parliament building in Kuala Lumpur September 23, 2021. — Picture by Yusof Mat Isa
Follow us on Instagram, subscribe to our Telegram channel and browser alerts for the latest news you need to know.
By IDA LIM

KUALA LUMPUR, Sept 23 — A group of Malaysian mothers seeking for their children born abroad to also be recognised as Malaysians delivered their petition to the government as represented by Foreign Minister Datuk Saifuddin Abdullah today.

This morning, Family Frontiers and 20 Malaysian mothers from its Collective of Mothers for Equal Citizenship handed over their petition, which received almost 30,000 online signatures in support of their plea for the government to stop appealing against a High Court decision that has given Malaysian mothers much hope.

But the Malaysian mothers’ joy was cut short as the Malaysian government filed an appeal just days later on September 13, which essentially meant the High Court decision could not be put into effect immediately to ease the mothers’ and their children’s ordeal.

Family Frontiers had said the government’s move to file the appeal was a delay of justice that effectively meant that justice was being denied for the affected Malaysian mothers and their children.

Family Frontiers had on September 13 launched an online petition under the #TarikBalikRayuan campaign to ask for the appeal to be dropped, and today gave both the petition and an open letter to Cabinet to Saifuddin outside Parliament. 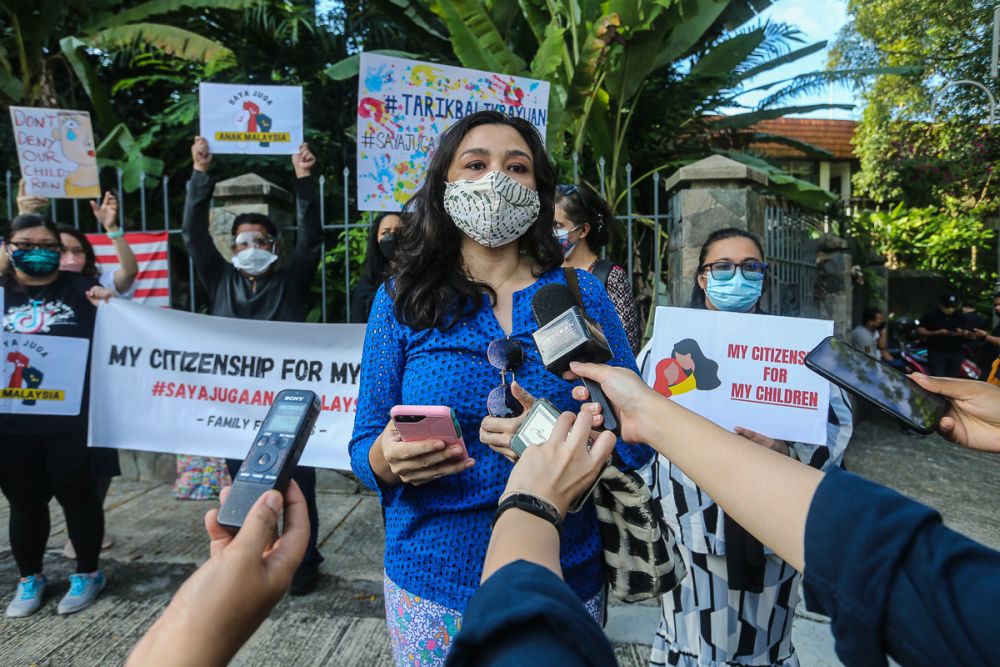 Family Frontiers quoted its president Suri Kempe as saying today: “We are here to deliver the will and demands of almost 30,000 and counting individuals who stand behind all Malaysian mothers who have been denied the right to pass on citizenship to their children, simply because they are women.”

“This injustice does not make legal, moral or economic sense in the 21st century. The High Court agreed with us, 30000 and counting signatories agreed with us. MPs across party lines, ministers and even the Sultan of Johor have agreed with us.

“The judgement lifted the anxiety that plagued Malaysian mothers with the uncertainty of their children’s status, well-being and future. The Government, by appealing against this decision, will delay justice not just to Malaysian women, but their non-Malaysian children too. So the plea we put to the government today is, don’t appeal,” she said in a statement issued by Family Frontiers today.

Family Frontiers quoted Saifuddin as saying that this serious issue was “received positively” at the Cabinet’s meeting last week when raised by Women, Family and Community Development Minister Datuk Seri Rina Harun, and that Cabinet will be consulting the attorney-general on this matter during the Cabinet’s meeting tomorrow. 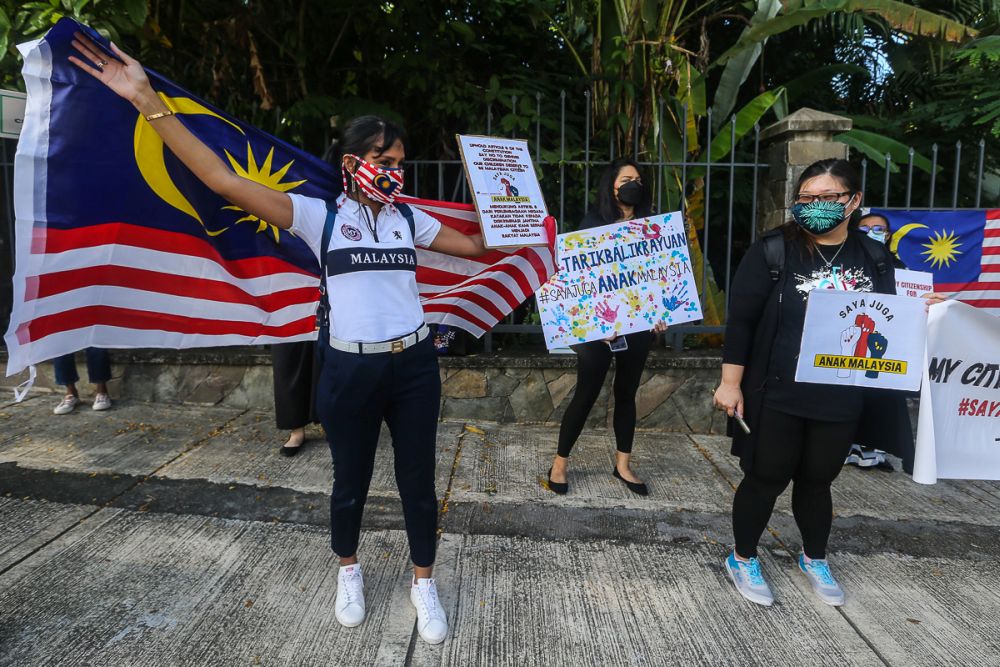 This has resulted in various difficulties for families where the mother is a Malaysian and the father a non-Malaysian, including situations where a child would have to go through the process of waiting for years in applying for citizenship simply because they were born abroad, while their other siblings are Malaysians because they were born in the country.

The hardship for such families has also increased during the Covid-19 pandemic, as there were pregnant Malaysian mothers who had no choice but to give birth overseas amid Covid-19 infection risks and border closures, while there were also situations where non-Malaysian children could not reunite with their families during such border closures or had to go through the process of renewing their papers to be allowed to be in Malaysia.

In comparison, Malaysian fathers married to foreigners have for decades been able to confer their citizenship to children who are born out of Malaysia, which means they are automatically recognised as citizens and do not have to go through the same difficult and lengthy process of applying for citizenship. 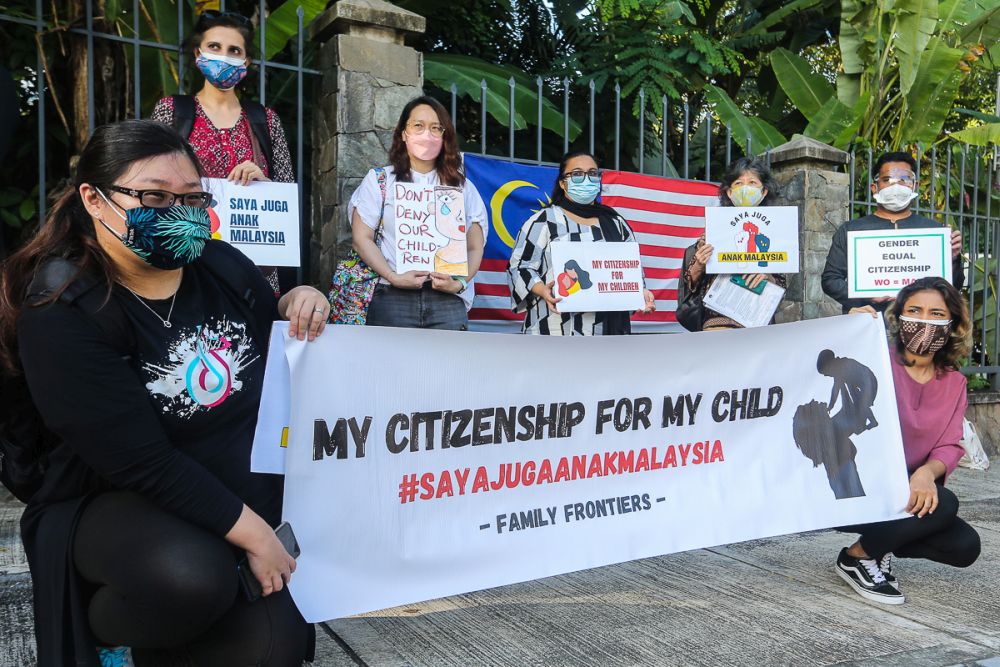 What the mothers told Cabinet

In the open letter to the Cabinet that was given to Saifuddin, the Malaysian mothers shared heart-wrenching stories of how the unequal citizenship laws have personally impacted them and their children, such as how an elder Malaysian sibling told the younger sibling — who was born abroad and was waiting for the past seven years to be recognised as a Malaysian — “you will be a Malaysian, just like all of us” upon hearing the High Court’s decision.

In the same letter, a Malaysian mother had shared how her children were forced to mature too soon as she kept having to go up and down immigration and education offices to pursue matters such as visa and citizenship for the children simply because they were born overseas, and had thought that the ordeal would have ended with the High Court decision.

The Malaysian mothers told the Cabinet that they felt they could finally breathe with the High Court decision, as they felt the weight of struggles for their children to be recognised as Malaysians was lifted off their shoulders.

But the government’s appeal had devastated the Malaysian mothers and overwhelmed them with the fear of having to face hardships again.

They pointed out that the Home Ministry had only approved 142 citizenship applications under the Federal Constitution’s Article 15(2) during 2013 to 2018, which they said represented a 1.64 per cent approval rate while reasons are not given for rejections.

The Malaysian mothers told Cabinet that this means that 98 per cent of their children will never have Malaysian citizenship through this process of applying under Article 15(2), a method which they were forced to use due to the gender discrimination in the country’s citizenship laws against them.

Under Article 15(2), the federal government may register anyone below the age of 21 — if at least one of their parents is a Malaysian — as a Malaysian citizen upon application by the person’s parent or guardian. This means that it comes with an age limit, and some of the overseas-born children have turned 21 while waiting for years for Malaysia to recognise them as citizens.

They also noted that their impacted children will be set back by many years in terms of access to basic rights enjoyed by Malaysians such as public education and affordable healthcare, and that many Malaysian mothers are being forced to remain in abusive or toxic marriages.

Indicating that their children would be assets for Malaysia, the affected mothers in the open letter urged the Malaysian government to immediately withdraw the appeal in the spirit of the new administration’s slogan “Keluarga Malaysia” and its goal of achieving key performance indicators (KPI) within its first 100 days in power. 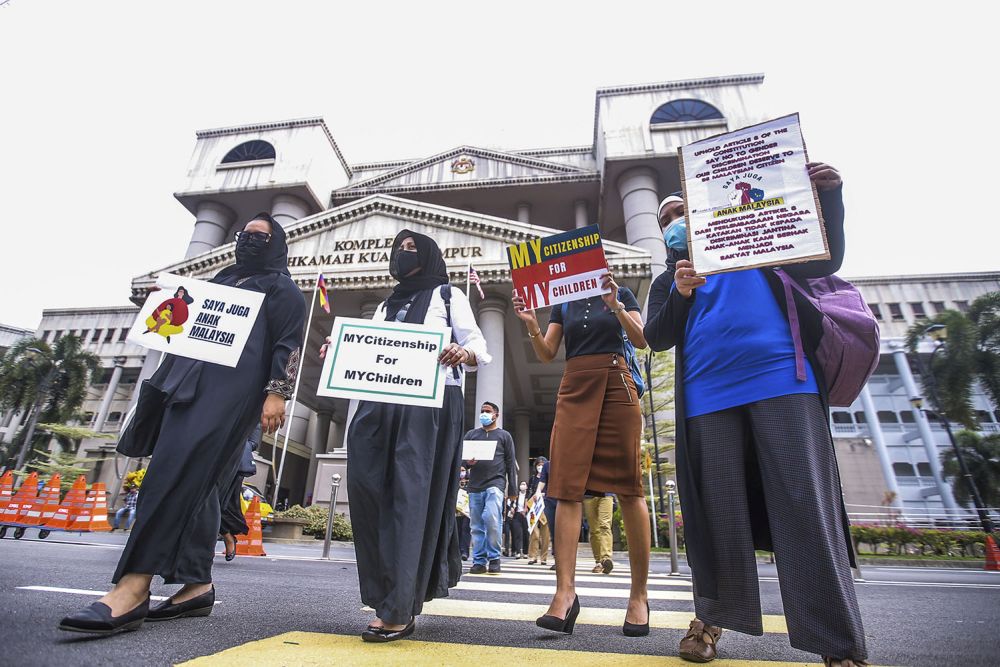 While noting the government’s intention to amend the Federal Constitution to resolve the citizenship issue, Family Frontiers said the government should show its commitment to addressing the Malaysian mothers’ plight by immediately dropping the appeal and start implementing the High Court decision without further delay.

Yesterday, Home Minister Datuk Seri Hamzah Zainudin had told the Dewan Rakyat that his ministry had filed the appeal and also applied for a stay of the High Court decision, in order to prevent contempt of court and to not breach the Federal Constitution while the government pursues a proposed amendment of the Federal Constitution. (Apart from the Malaysian government and the National Registration Department director-general, the home minister was also named as one of the three respondents in the court case by the Malaysian mothers and Family Frontiers.)

The minister said that the Home Ministry plans to seek for a new government policy to amend the Federal Constitution to make things easier for Malaysian mothers married to foreigners and who give birth overseas, while saying that such constitutional amendment on citizenship matters requires consent from the Conference of Rulers in line with the Federal Constitution’s Article 159(5).

At the time of writing, a check by Malay Mail showed that the online petition on Change.org was at 29,007 signatures and was still ticking up.