Tan Boon selling from his motorcycle hawker stall. — Pictures by Steven Ooi KE
Follow us on Instagram, subscribe to our Telegram channel and browser alerts for the latest news you need to know.
By OPALYN MOK

GEORGE TOWN, July 7 — You smell the aroma of grilled meat even before you reach the motorcycle hawker stall with its glass display case.

Tan Boon is busy grilling rectangular slices of pork on a small charcoal grill and depending on customers’ orders, he also places skewers of fish balls, pork balls, chicken feet, gizzards and bishops’ noses on the grill.

In between grilling, he deftly slathers the grilled pork slices with a sweet savoury sauce before placing them between sliced soft steamed buns.

The buns are then wrapped with paper and placed into small plastic bags before being handed over to customers.

The stall, named Oh Kee Bak Kua, was started by his uncle Ow Yew Kim at Jalan Sekolah La Salle back in the 1960s.

“My uncle would set up outside the Federal cinema during show times at night too,” Tan said.

Bak kua roti and grilled chicken parts have long been a quintessential snack, along with kacang putih, sunflower seeds and salted peanuts, for those catching a movie at some of the cinemas in Penang back in the 1960s up to the 1990s.

Federal, located along Jalan Datuk Keramat, shuttered in the late 1990s and is now a restaurant.

Tan said his uncle would move his stall around some cinemas as there were also other similar bak kua stalls at other cinemas.

“We each have our own market so we do not overlap each other, even till today,” he said.

Tan started helping his uncle at the stall along Jalan La Salle from the age of 17 and eventually took over the business from his uncle several years ago.

“My aunt is now 80 years old and I didn’t want this tradition to die out so I decided to take over the stall despite the hard work,” he said.

Tan said he prepared all of the marinated pork slices, the meat floss, the grilled chicken and the signature item, ark kha, from recipes handed down by his uncle.

The ark kha, which means “duck feet” in Hokkien, is a specialty item in which marinated grilled pieces of pork, duck feet and fats are wrapped in pork intestine to look like duck’s feet. To suit modern times, Tan also has zha ti, an all-pork version of the ark kha where grilled pieces of pork and fats are wrapped in pork intestine in a thick roll.

“Most visitors from out of state would order the ark kha while locals prefer the zha ti so I usually make the ark kha to sell on weekends while the zha ti is available daily,” he said.

Tan has continued his uncle’s tradition of selling bak kua near the junction of Jalan Sekolah La Salle daily from 12pm to 6pm.

“The stall is open here every day but I also move around,” he said.

The stall is open at the Jelutong morning market from 6.30am to 10.30am before it moves to Jalan Sekolah La Salle.

Once it closes at Jalan Sekolah La Salle, the stall moves to Farlim, outside Jin Kuang Coffee Shop, from 7pm to 11pm.

Other than the stall, Tan also has a joint venture of food trucks selling a modernised version of the bak kua buns. The food truck under the brand name ‘Long Hui Xiang’.

The food truck business is under the brand name “Long Hui Xiang” which is named after Tan’s own nickname “Xiao Long” (Little Dragon).

The first food truck was introduced in late 2019; it is parked outside the Genting Coffeeshop in Green Lane from 7.30am to 5pm daily.

The truck offers nine different types of sandwich buns from the traditional bak kua bun to modernised versions such as bacon, egg and cheese bun, burger cheese and egg, luncheon meat, cheese and egg and even buns with Taiwanese sausages or the Thai moo ping (Thai style grilled pork).

“I want to cater to the younger crowd too so these modernised versions appeal to them and the different types of sandwiches give people more options other than bak kua or bak hu,” he said. 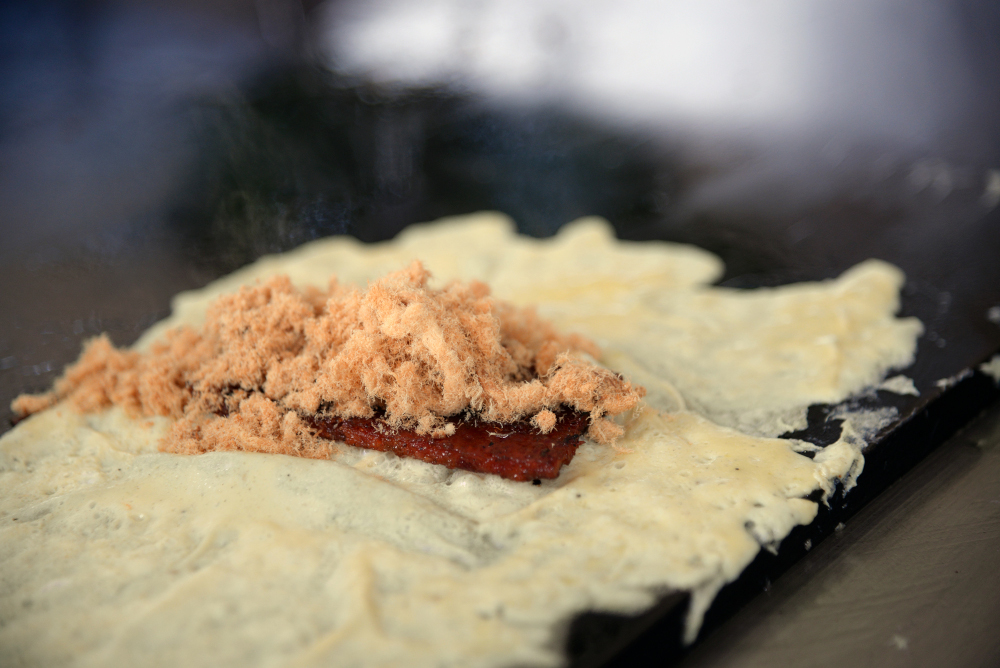 A modern twist to the Bak Kua roti which has chicken floss and egg wrapped in a bun.

The Long Hui Xiang food truck is so successful that Tan has already set up a second truck with plans for a third one in the future.

Since his stall operates in three different locations around Jelutong and Air Itam and the first food truck is in Green Lane, he is thinking about placing the second food truck somewhere in Sungai Ara.

“I want to reach out to a wider market so we are looking for a suitable place to set up the food truck in that area,” he said.

As for the third food truck, Tan said it is not finalised yet but it would probably be catering to those on the mainland. 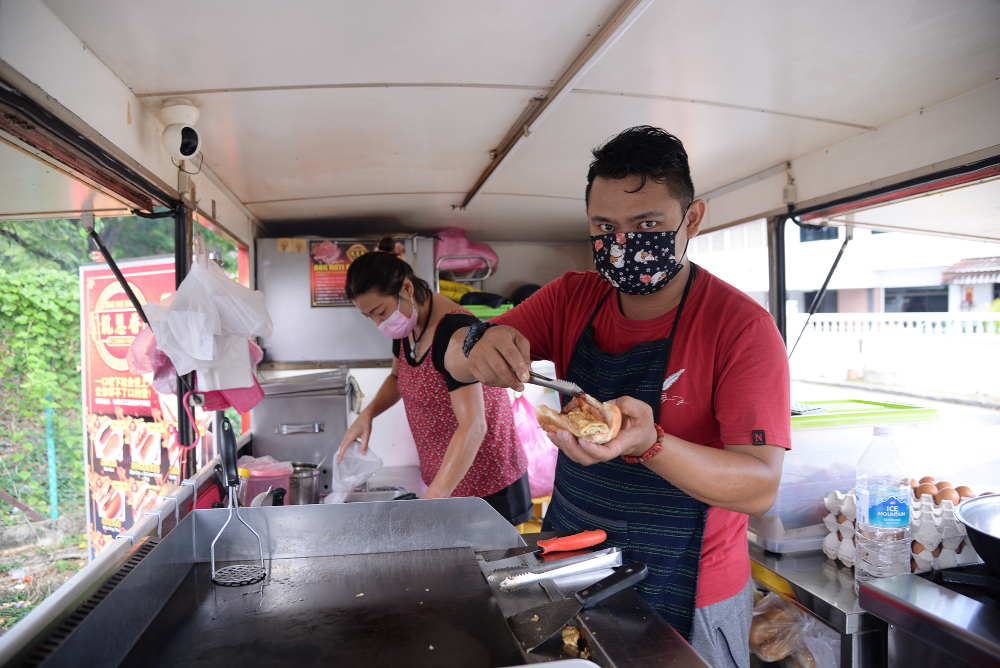 Tan Boon prepares one of the orders for a customer at the food truck.

The movement control order (MCO) in 2020 and this year affected Tan’s business. He had to close his food truck and stall for three months in 2020.

“I took orders on my Facebook page and delivered to my customers during the three months but business was so slow, I even created special ‘buy 10, get one free’ offers to get more orders,” he said.

He said business dropped over 40 per cent last year and it picked up slowly towards the end of 2020.

The implementation of the movement control order (MCO) 3.0 from May 10 which led to the full MCO from June 1 and eventually Phase One of the National Recovery Plan (NRP) have badly affected his business.

He used to start his business at 7am at the Jelutong Market but due to the SOPs of the MCO and phase one of the NRP, he could only start operations at 8am.

“This has reduced my business a lot as customers usually will buy breakfast before going to work and 8am is too late for them,” he said. 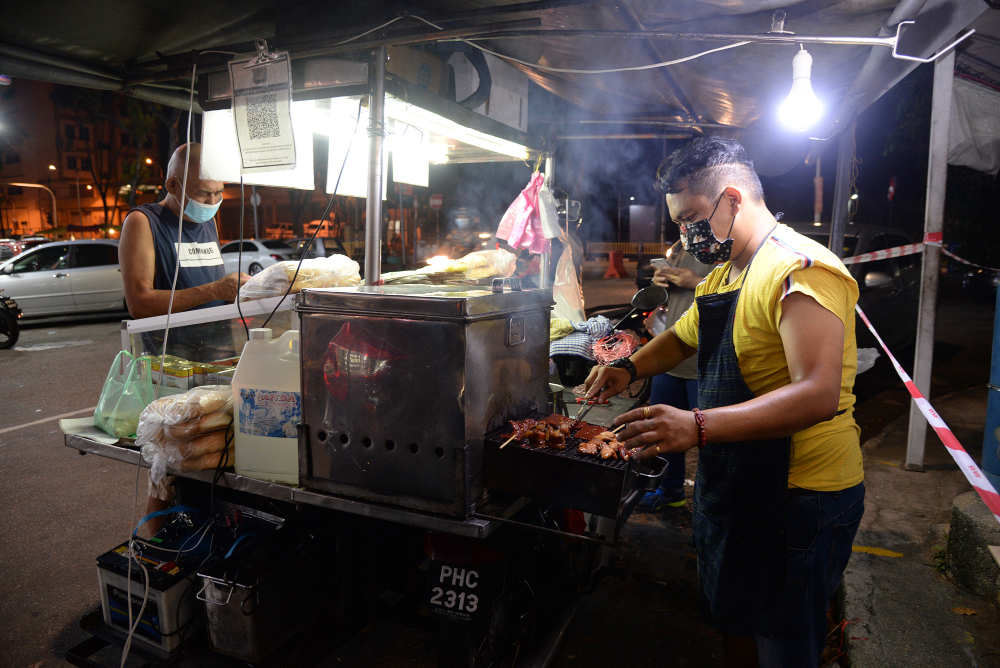 Tan Boon grilling the orders for customers during his night session in Air Itam.

Now that Penang is entering Phase Two of the NRP starting today, Tan is glad that he can finally start operations from 7am onwards and close his stall at 9pm.

“It is good that I can open earlier and we can also close at 9pm so that I can get more customers,” he said.

Tan has continued to offer delivery from his stall in Jalan La Salle through food delivery services such as Foodpanda, Delivereat and Hungry.

He has also registered for e-payment services to offer his customers the option of making cashless payments.

“We need to embrace new technology and the new normal so when Touch and Go approached me to register, I immediately registered and after that, I registered for other e-payment services such as Boost, QRPay and Grabpay,” he said.

He said offering a cashless payment option to his customers was a good move as a lot of customers are now opting to pay using their e-wallets. 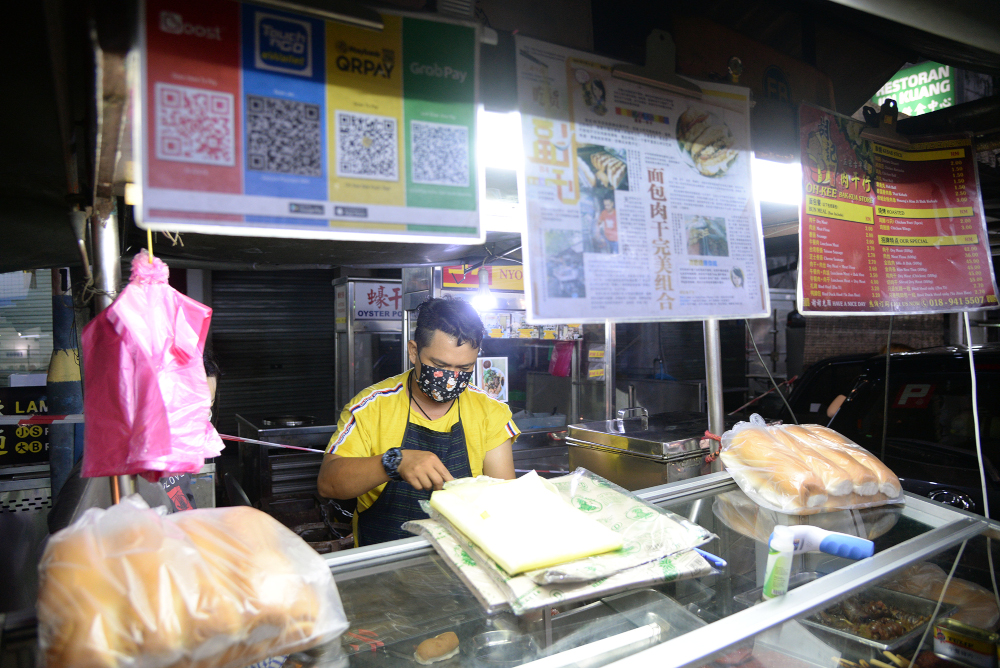 He said he gets e-payments of about RM2,000 each month.

Tan is always looking for ways to grow and expand his business. “I have so many ideas, so many plans I want to put in place but I am short-handed so I will do it one at a time,” he said.

For now, he has introduced uniforms for his workers manning the stall and food trucks to present a clean, professional image.

“We may be selling street food but I believe that we must also be presentable and clean in terms of our dressing and how we prepare our food,” he said.

Oh Kee Bak Kua stall is open at the Jelutong morning market from 7am to 10.30am daily except Wednesdays.

The original stall is open daily at Jalan La Salle daily from 12pm to 6pm and he has another stall which operates outside the Jin Kuang Coffee Shop, Medan Angsana 3, in Farlim from 7am to 9pm daily. The Long Hui Xiang food truck is open daily in front of Genting Coffee Shop, Lorong Delima 6, from 7.30am to 5pm.

Those who wish to place orders for takeaway can call 018-941 5507.or go to their Facebook page: https://www.facebook.com/ohkeebakkuah