With RMCO expiring in two weeks, where are the 23 Covid-19 clusters in Malaysia?

KUALA LUMPUR, Aug 17 — As Malaysia nears the scheduled end of its recovery movement control order (RMCO), a recent outbreak of several new clusters in recent weeks has put a spotlight on public complacency towards measures to contain the Covid-19 pandemic.

Over the last week, the emergence of the so-called Sivagangga cluster has demonstrated how one individual’s failure to observe his home quarantine order or standard operating procedures could jeopardise Malaysia’s preparations for the next phase of recovery.

The cluster’s “Patient Zero”, who breached his mandatory home quarantine, has been identified as causing at least 40 other infections, some of which were third-generation cases.

Yet this was only one of several infection clusters that have emerged since authorities began easing restrictions that were meant to contain the Covid-19 infection rate locally.

As of August 16, there were 20 Covid-19 clusters in Malaysia, with eight still registering active cases, according to data provided by the Health Ministry.

Overall, there have been 78 distinct clusters in Malaysia that have ended since the ministry began reporting on these.

Health director-general Datuk Dr Noor Hisham Abdullah previously said an active cluster could only be considered inactive after a 28-day surveillance period since the last case from the respective cluster was recorded.

With less than two weeks until the expiration of the RMCO on August 31, Malay Mail has compiled a list of most active Covid-19 clusters.

The largest active Covid-19 cluster in recent weeks remained the Sivagangga cluster in Kedah, caused by the quarantine breach by a permanent resident returnee.

With linked-infections recorded in three different states and six districts, the cluster has thus far registered 45 positive cases and no recoveries to date as on August 13.

Of the 45 positive cases, 38 comprised Malaysians while five were Indian nationals.

Several more clusters — Sala, Muda and Tawar — then began emerging throughout the state shortly after but authorities said these were not linked to the Sivagangga cluster.

The source of the aforementioned three clusters is still being determined.

As of August 15, the Bukit Jalil immigration detention depot registered the highest number of total cases recorded with 653 out of 1,662 having tested positive for Covid-19, although only three cases remain under treatment.

Of the 653, 650 were non-Malaysians and there was one fatality. In total, 649 have since fully recovered.

The cluster was first detected on May 21 after 35 individuals tested positive for Covid-19. They involved foreigners of various nationalities who were detained since before the start of the MCO on March 18.

The current biggest active cluster outside the peninsula is the Sentosa cluster involving the Sentosa hospital in Kuching, Sarawak.

As of August 13, the Sentosa cluster has no known active cases currently receiving treatment after recording 31 positive cases to date with the majority of them comprising ministry staff and support services staff.

According to the Health Ministry, the cluster was first detected on July 21 with over 1,064 individuals screened.

Initial investigations found that it is very likely the source of infection came from activities within the community.

All of the lesser active clusters have recorded less than 20 cases to date as of August 16.

Pahang’s sole cluster — Elsa — originates from a foreigner, who is a ship crew with an air travel history from the Philippines, transiting in Korea. He had entered the country on July 16 to work.

As for the Ramnad and Al Khobar PUI clusters, both were Malaysians returning from India and Saudi Arabia respectively with infections amongst their family members.

The Selangor's Bukit Tiram cluster, which was first reported on July 26, with two positive cases detected then, involved foreigners working at a Roman Catholic church in Taman Bukit Tiram. All 10 who have tested positive have since recovered.

In Johor, the warga emas Kluang cluster first came to light on July 20 after the first positive case originated from one of the resident’s death — the cluster’s sole fatality. To date, 18 have been tested positive with 17 fully recovered.

The Hyde Park cluster was detected on a ship in Port Klang where its index case is a non-Malaysian citizen who has a travel history to Egypt and India. Four positive cases were recorded and all have since recovered.

As for the Melbourne PUI cluster, its index case is a Malaysian student who returned from Australia on July 15 and tested positive for the virus on July 17. Three positive cases were recorded and all have since recovered.

The Stutong cluster emerged in July after 586 traders at the wet market there underwent screening by a health ministry team. Seven positive cases were recorded and all have since recovered.

The Mambong cluster first emerged on July 14, involving a Malaysian and a non-Malaysian at a company in Mambong. Seven positive cases were recorded and all have since recovered. 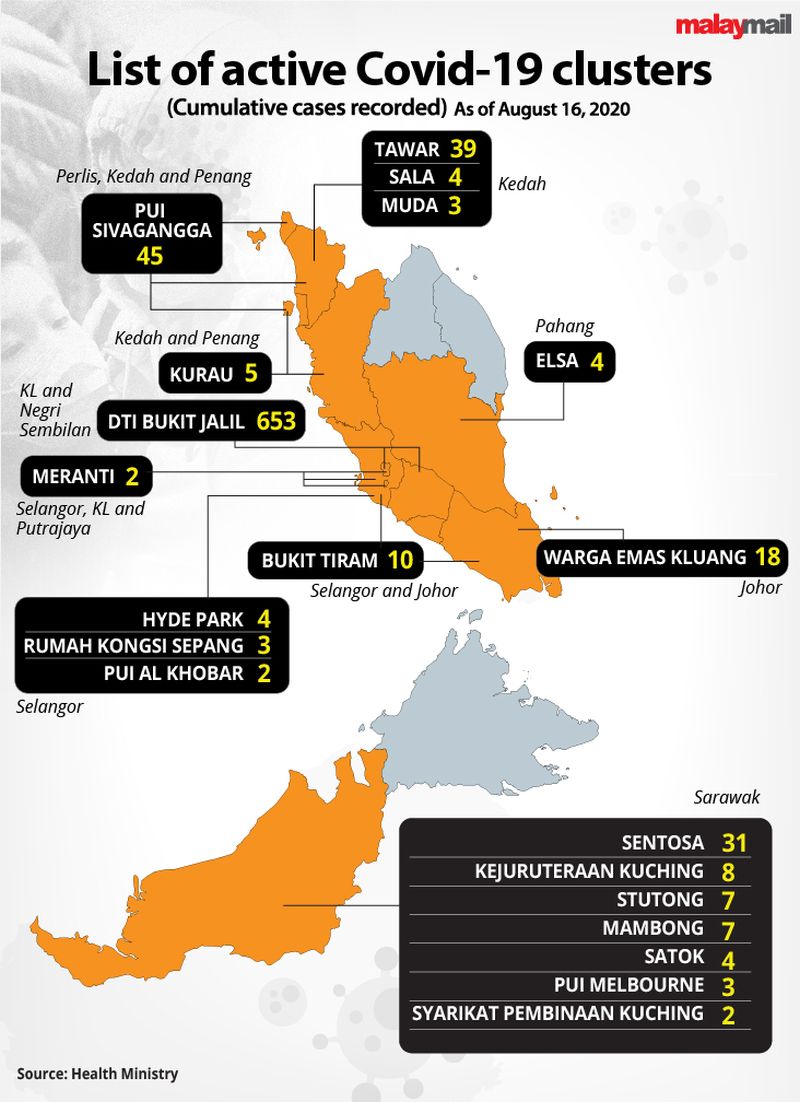