PUI is the acronym for Person Under Investigation.

“This cluster index case is of a Malaysian citizen who returned to Malaysia from India on July 6 (Case 8,817). A Covid-19 screening at KLIA was found to be negative. He followed the Home Surveillance Order (HSO) and started experiencing mild symptoms on July 19.

“The 13th day HSO screening was found to be positive and he was admitted to Sungai Buloh Hospital in Selangor. Following that, a close contact investigation and screening was conducted. So far, 18 people have been screened and they are made up of six family members and 12 passengers of the aircraft,” Dr Noor Hisham said in reference to the PUI Ramnad cluster.

He said that two of whom are family members have since tested positive, with 13 others testing negative and three others still awaiting their test results.

The Elsa cluster, meanwhile, involves a foreigner (Case 8,839), who is a ship crew, with an air travel history from the Philippines, transiting in Korea. He had entered the country on July 16 to work.

Dr Noor Hisham said that the patient’s Covid-19 test results in the Philippines came back negative, and the latter then travelled to Kuantan by plane, where he spent the night in a hotel, before being brought to undergo quarantine onboard his ship, after getting approval from the Marine Department.

“Five days after that, on July 20, he began showing symptoms. He tested positive on July 22 and was admitted to Sultan Haji Ahmad Shah Hospital in Pahang.

“Following that, contact tracing was done and a total of 108 people were screened, whereby three were found Covid-19 positive, involving two foreigners and one Malaysian, 48 tested negative while 57 are awaiting their results,” he added.

Dr Noor Hisham said that the PUI Al Khobar cluster, meanwhile, originated from a Malaysian who had returned here from Saudi Arabia on July 10 (Case 8,803). He had intially tested negative at the KLIA entry gate.

“The index case began experiencing symptoms on July 18 and tested positive for Covid-19 on July 20. Following that, seven other family members were screened, whereby one tested positive for Covid-19, while six others tested negative,” Dr Noor Hisham said, adding that investigations and contact tracing activities are ongoing, including tracing other airline passengers who had travelled together with the index case.

He pointed out that the three clusters are local infection cases caused by imported ones and urged Malaysian returnees to fully adhere to the HSO. 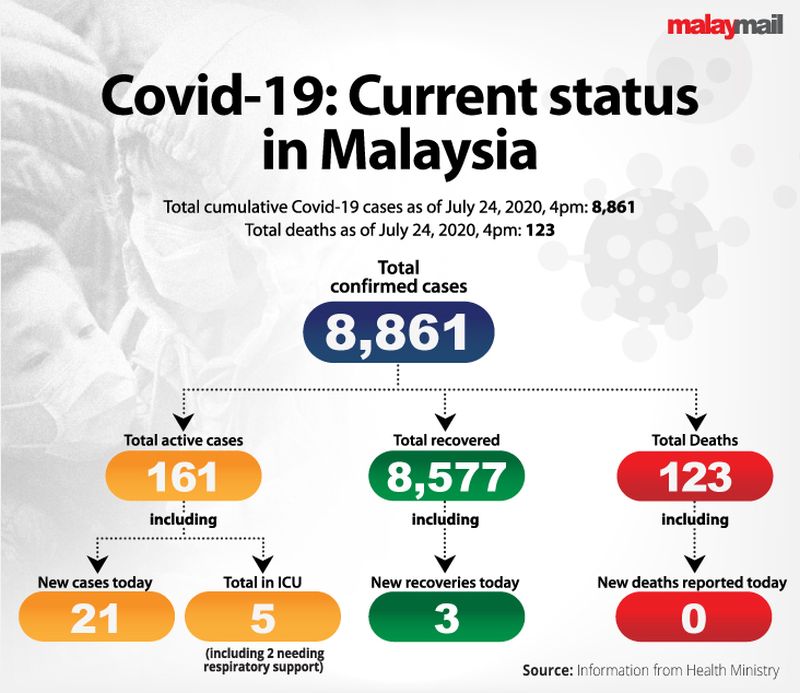