Covid-19: Mandatory mask wearing not an issue, but physical distancing not adhered to by some customers at popular Bangsar eateries

KUALA LUMPUR, August 1 — As Malaysia enters the final stage of the recovery movement control order (RMCO), complacency has unfortunately set in among the general public.

In particular, physical distancing rules seem to have gone out the window even as the wearing of face masks has become common.

All of those queuing wore masks in compliance with the government’s mandatory wearing of face masks order which took effect today, but failed to adhere to proper physical distancing measures.

Despite repeated reminders from restaurants’ employees, many of those queuing up, including those in families and groups, failed to keep a distance of one metre from one another.

“Please maintain a distance of one metre!” was the common plea Malay Mail heard while there for an observation his afternoon, but to no avail as patrons continued to stand close together.

Yesterday, the Health Ministry announced that the term social distancing used in the standard operating procedure (SOP) to prevent the spread of the Covid-19 pandemic has now been changed to “physical distancing”.

The use of the new term refers to that all-important one-metre distance we need to keep from each other.

For M. Amutha Devi, owner of the popular Sri Nirwana Maju banana leaf restaurant, a microphone is all she needs to “remind” people queuing outside her restaurant premises to practise physical distancing.

When asked, she acknowledged the long queue which had formed outside her restaurant.

“Yes, we instructed our staff to remind the people outside to distance themselves if they forget or refuse to listen, this is repeatedly told to them.

“That is why I am also here all the time to make sure these people distance themselves,” she told Malay Mail at the restaurant’s entrance where she personally supervises patrons’ check-ins.

She, however, remained optimistic that customers, even the “difficult” ones, will have the discipline to adhere to the SOP in the long run should they choose dine-in.

“If they don’t (follow SOP) or not wear a mask, then we tell them they are not allowed to dine in. Some of our customers are not comfortable with that so we make sure everyone follows the SOP.”

Over at Daddy Arumugam Recipe, supervisor Edwin Dran described the situation as “out of control” but said the restaurant was doing all it can to constantly remind patrons of the physical distancing rule.

“Actually, we are still finding a solution. The only way we can do now is manually ask them to move,” he told Malay Mail, adding that many patrons listened to their advice but would inadvertently forget about keeping one metre apart and move close to each other while waiting, resulting in the necessary prompts.

“Mainly because these patrons are from family groups and in that situation, we cannot ask them to sit separately. One efficient solution is to reduce the number of tables,” he said in attempting to discourage the number of queuing customers.

Earlier today, the Health Ministry recorded nine new Covid-19 cases in Malaysia, bringing the infection tally in the country to 8,985 cases and the number of active cases to 213.

The RMCO which began on June 10, is scheduled to end on August 31.

However, Health director-general Datuk Dr Noor Hisham Abdullah has warned that the government may reimpose MCO as it did during the early stages of the pandemic if local transmission cases of Covid-19 hits three digits. 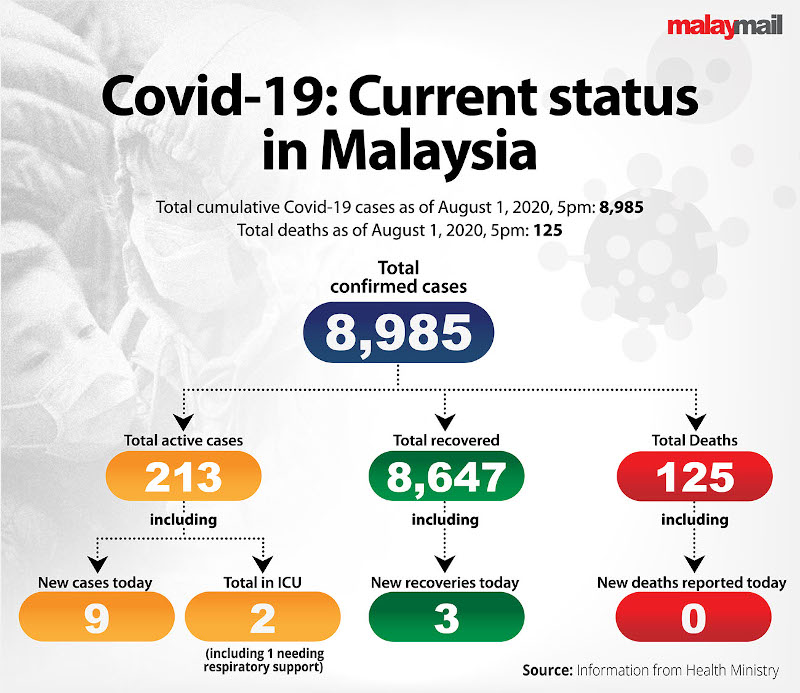