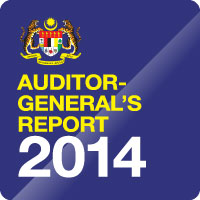 KANGAR, Nov 23 — The Perlis Land and Mines (PTG) and the state Economic Development Corporation (PKENPs) which were found to be inefficient in terms of their management and action were reprimanded by the Auditor-General.

According to the third series of the 2014 Auditor-General’s Report which was released today the weaknesses had resulted in loss of revenue to the state.

However, auditing conducted on PTG between February and April 2014 found in general, the management of the Malay Reserve Land (TRM) as satisfactory.

“Although PTG was found as not being serious in gazetting the TRM which had been cancelled or replaced, in terms of areas, TRM covers over 50 per cent of the Perlis land area.

The report said among the weaknesses of managing TRM that should be given priority were not replacing the cancelled TRM; failure to endorse the land grant as TRM; the cancelled and replaced TRM yet to be gazzetted; incomplete and not updated records.

In this regard, the report has suggested PTG to improve its internal controls in managing the cancellation, replacement, endorsement and the gazette of TRM.

The PTG has also been urged to improve its existing working procedures to enhance employee efficiency and create Referral Officers (Subject Matter Expert-SME) in the field of management and legislation related to TRM.

Audit checks on the PKENPs between March to June 2014 revealed that its land and property management was less satisfactory due to several weaknesses such as poorly managed idle land; late derived revenue/yield and projects not yielding good results.

Unsatisfactory management of joint projects; development projects on land owned by the Menteri Besar Incorporated (MBI) contact has not been provided; sales management and building rental were unsatisfactory, it said.

“To ensure that the land and buildings are managed efficiently, PKENPs has been urged to set up a complete and updated land and building data bank for easy monitoring while undeveloped land be fenced and placed with ‘no trespassing’ signs,” the report said. — Bernama