KUALA LUMPUR, Aug 6 — The police defended today their investigation on several Malaysian Anti-Corruption Commission (MACC) officers who were involved in a probe on 1Malaysia Development Berhad, saying it was lawfully done to probe leaks of government information.

Deputy Inspector-General of Police Datuk Noor Rashid Ibrahim said the questioning of several senior graft-busters and the raid of the special operations division of the MACC headquarters in Putrajaya was the police’s “prerogative”.

“No hidden hands involved. We are not going to interrupt MACC’s job. We respect MACC’s jurisdiction, and we are focused on certain other affairs,” Noor Rashid told a press conference here, in response to a senior MACC officer’s allegation that the police were acting based on orders from above.

“Our focus is on the leakage of the information...others we are not concerned about and we will continue the investigation,” he added.

Last night, the police raided the MACC's Special Operations Division, fresh after interrogating three senior graftbusters earlier in the day over the alleged leak of documents on the 1MDB probe.

Two of the division’s officers were also detained. One of those arrested is believed to be an officer directly involved in the investigation on SRC International, a former subsidiary of 1MDB.

This raid was the second of its kind to be conducted on the agency’s headquarters since last week.

Responding to the police action against his men, MACC's Special Operations Division director Datuk Bahri Mohamad Zin lashed out last night, asking if the authorities were acting on “someone’s” orders.

The investigation follows a damning article in business daily the Wall Street Journal (WSJ) on July 2, which cited leaked documents from government investigators as proof that one portion of the funds was funnelled into Najib’s Ambank account through a former 1MDB subsidiary, SRC International.

MACC had on Monday issued a statement to confirm the existence of the funds in Najib’s accounts and clarify that they had come from donors and not 1MDB as previously alleged.

The statement triggered a flurry of responses from activists and opposition lawmakers, who demanded that the commission investigate the donation for possible corruption and money-laundering. 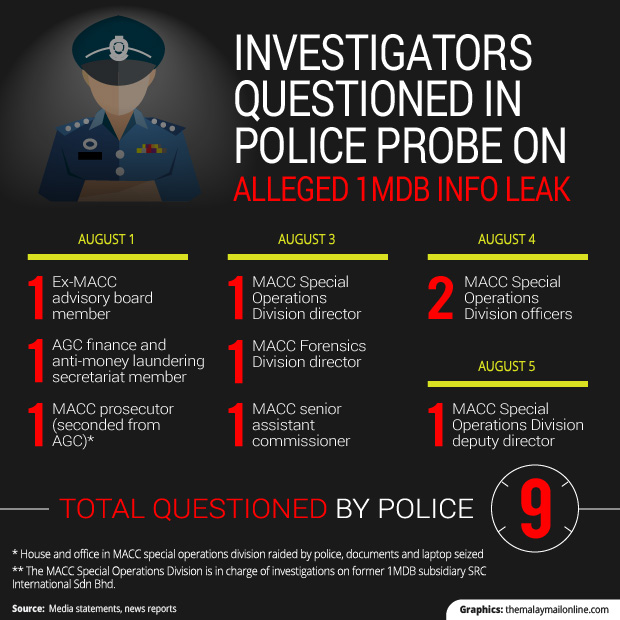