Abdullah Hussain has received treatment for renal replacement therapy since 1990 and remains healthy thanks to his discipline and adherence to his treatment schedule. — Picture via Facebook/Eason Chang
Follow us on Instagram, subscribe to our Telegram channel and browser alerts for the latest news you need to know.

PETALING JAYA, Jan 15 — Since his retirement, Abdullah Hussain spends his mornings tending to his garden just after breakfast before helping his wife with some of the household chores.

The sprightly 67-year-old sticks to this routine almost every day and remains in fine fettle despite being on renal replacement therapy for the past three decades.

Renal replacement therapy typically refers to treatment that replaces the function of the kidneys which is to filter blood.

The therapy can be haemodialysis, peritoneal dialysis, hemofiltration, hemodiafiltration or transplantation.

Inspired by his determination to keep himself healthy and in good shape, Abdullah’s medical practitioner Dr Eason Chang took to Facebook last week to share his patient’s inspiring story of resolve and proper care with his life on dialysis.

Dr Chang extensively praised Abdullah’s self-discipline and controlled management of his treatment over the past 30 years, as he has managed to remain in good health.

“Pak Lah is the longest ever-patient on dialysis at Sultan Abdul Halim Hospital. 2020 marks the start of the fourth decade that he is on dialysis,” wrote Dr Chang.

“Life on dialysis is difficult and challenging but he is proof that with self-discipline and proper care, a long quality life on renal replacement therapy is possible.

“He has lived to see his six children grow up and even have their own kids, so he serves as a motivation and example to other patients in the unit to follow in his footsteps.”

It has previously been reported that there was close to 40,000 Malaysians requiring regular dialysis and from this 90 per cent are undergoing haemodialysis three times weekly.

The Health Ministry also said more than 100,000 Malaysians are expected to have kidney failure in the next two decades.

Abdullah, or “Pak Lah” as he’s commonly referred to, has been on renal replacement therapy since 1990 when he was 37 years old as he suffered from glomerulonephritis, which is the inflammation of the tiny filters in your kidneys called glomeruli.

Despite living with the condition for multiple decades, he has had a good quality of life and has lived long enough to meet and be with all of his eight grandchildren — which might not have been achievable if he didn’t take charge of his own health.

He initially received treatment for his condition through peritoneal dialysis at the Penang General Hospital in George Town in 1990, and later received haemodialysis for seven years at Hospital Sultanah Bahiyah, Alor Setar, Kedah, before the Sultan Abdul Halim hospital opened in Sungai Petani.

When contacted by Malay Mail, Abdullah revealed that he used to drive, for an hour at least, all the way to Penang and Alor Setar from his home in Tikam Batu, Kedah for his scheduled treatments, in spite of the lengthy journey. 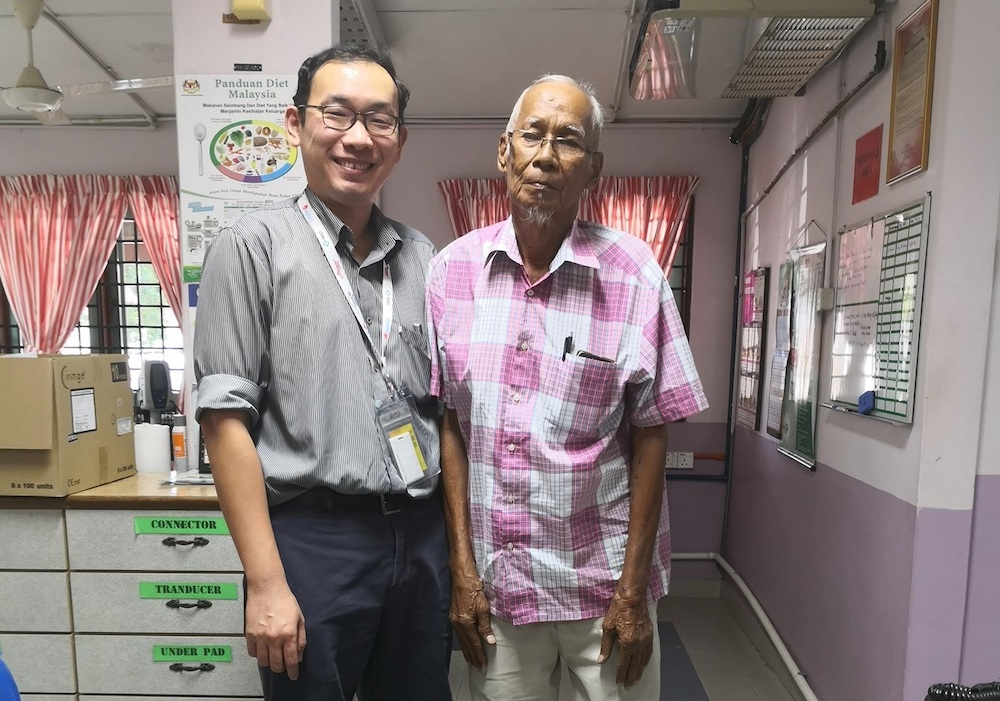 Abdullah has been under the care of Dr Chang for over 10 years, even before he became a nephrologist. — Picture via Facebook/Eason Chang

“When I first had to go through dialysis, I used to drive to Penang for all my appointments there,” said Abdullah.

“When I received haemodialysis in Alor Setar, I drove myself occasionally, but sometimes I would take the bus or hitch a ride from my friends if they were going there.”

Abdullah used to work as a technician for the Malaysian Public Works Department (JKR) for 35 years, from 1972 to 2007 and has been stationed in both Penang and Sungai Petani.

Despite not earning an extravagant income, Abdullah said that living life on dialysis can be managed as long as you “stick to the rules”, which would help to avoid any other additional complications like Dr Chang mentioned in his post.

“My advice to other dialysis patients is nothing special but simply to always be compliant with your dialysis schedule and not to miss your sessions,” said Abdullah.

“You have to take proper care with your food and fluid intake as well, nothing exact, but just know when enough is enough.”

He also stressed that paying attention to the recommendations and guidance of doctors and medical practitioners earnestly, as those “little things” often made big differences, but still bent the rules every now and then. 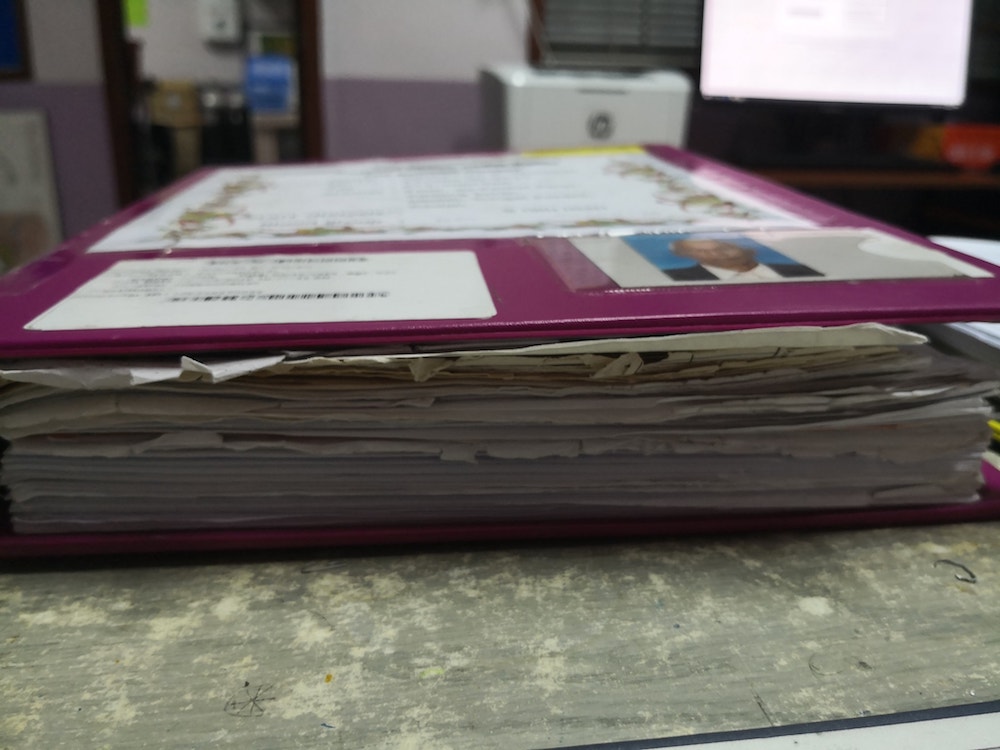 Abdullah’s medical file was the thickest in the entire hospital, with 30 years’ worth of notes written in it. — Picture via Facebook/Eason Chang

“Our doctors always say to avoid salty foods and food high in phosphorus, so I always paid attention to that,” said Abdullah.

“As for my fluid intake, I didn’t really limit myself that strictly or stick to the usual 500 millilitres cap for haemodialysis patients.

“It was more like roughly estimating how much I drank but being conscious of not drinking too much, so there won’t be any problems when I go for treatment to clean my blood the next day.”

However, even with his discipline and consistency in “sticking to the rules”, it doesn’t mean that unexpected problems can’t arise out of blue, as Abdullah described his previous struggles with his arteriovenous fistula.

The arteriovenous fistula is created when a person’s vein is surgically connected to the vein (usually in the arm) in order for the patient to undergo haemodialysis.

“I struggled a lot back when my arteriovenous fistula used for dialysis failed. It caused me many problems and I felt I could have taken better care of it,” said Abdullah.

“You have to make sure that it is always clean before dialysis and make sure not to put any extra pressure on the area.”

“So, I would like to advise all dialysis patients to take care of your fistula — which is our lifeline for dialysis.”

He added that he also couldn’t have lived healthily for this long without the support of his family and the medical staff that have treated him over the years, as he thanked them for standing by his side through it all.

“My family, my wife and children especially have been very supportive of me and my condition throughout the years, they’ve always helped me with whatever I needed,” said Abdullah.

“The doctors, nurses, medical assistants who have helped me for so many years, like Dr Chang, I’ve known him for more than 10 years even before he became a nephrologist — I’m eternally grateful for everything they have done for me.” 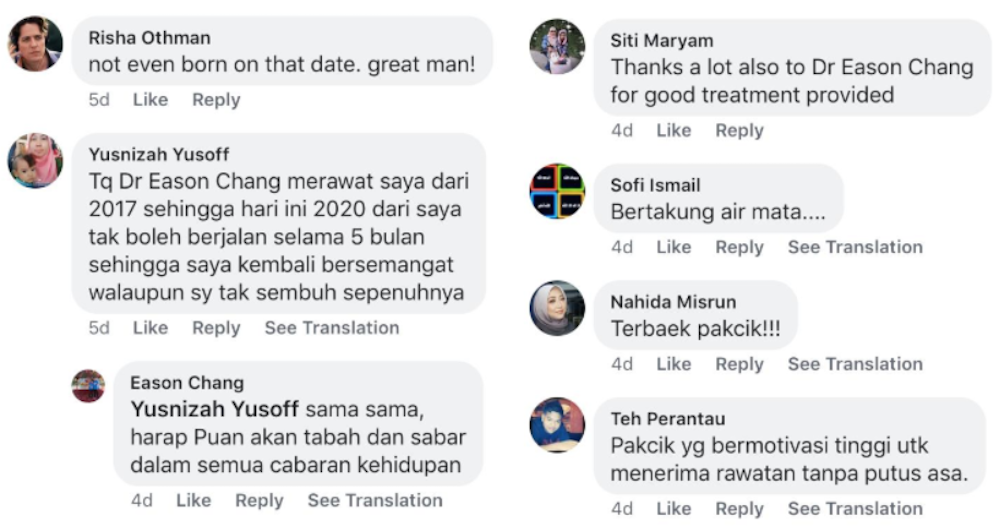 Social media users were inspired by Abdullah’s story and prayed that he continues to be blessed with good health. — Screengrab via Facebook/Eason Chang

Hearing about Abdullah’s inspiring tale of his longevity even when on renal replacement therapy for the past 30 years, Dr Chang’s post has since garnered nearly 3,000 likes with 1,000 shares as many social media users have reacted to Dr Chang’s post on Facebook saying that he is a role model to many.

“This uncle is a motivation to everyone for his motivation to take care of himself, he should be an ambassador or spokesperson for all dialysis patients,” wrote one user.

“I wasn’t even born on the date he first received treatment, what a great man!” wrote another user.

While other users lamented praise for the 67-year-old as he proved that consistency with treatments and medications make a big difference in the long run, for any struggling patient.