OCT 10 — Previously, Emir Research has presented fundamental dynamics behind the brain drain phenomenon. So let us immerse deeper into the topic and discuss structures essential for breaking out of the vicious cycle of a poor economy, low quality of life and brain drain.

The correlations (and likely reciprocal relationships) between poor economy, quality of life and brain drain are apparent and supported by the global data:

However, the low quality of life and poor economy are only the parochial results of poor governance and lack of focus on the rakyat and the issues of importance to them: 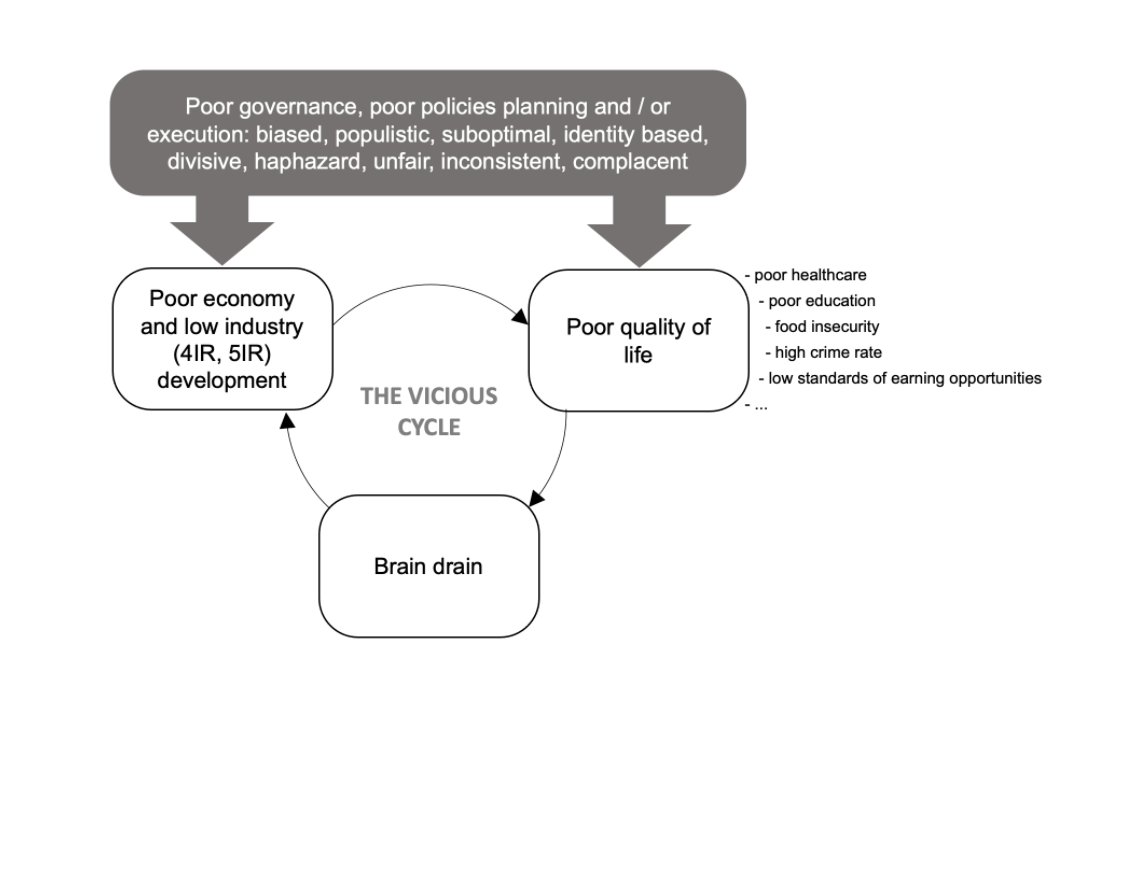 When citizenry’s expectations are not met while their voices are continuously subdued and ignored, the bright, highly trained, and most qualified among them choose to “vote with their feet”.

Human flight and brain drain index (data available from 2007 to 2020) suggests that Malaysian brain drain has been on the rise throughout the period. Interestingly the trend has slowed and reversed during 2013–2014 before resuming with the same speed after the eruption of the 1MDB scandal in 2015.

Another reversal of the trend in 2019 was probably on a big hope in Pakatan Harapan’s rakyat centric, all-inclusive manifesto. However, after that, the pandemic happened coupled with an ever greater politicking, power-grab race and rakyat side-lining.

And only globally shrinking earning opportunities in the post-pandemic world do not allow us currently to estimate how many more prolific citizens of our country are already preparing to vote with their feet. Once the more advanced economies rebound, we have no reason, as for now, to expect that Malaysia’s brain drain will not resume with the same or even higher speed—this entire pandemic period have been quite revealing to the rakyat.

The following chart provides evidence of the close association between brain drain and the state’s openness, representativeness, accountability and ability to execute basic functions that infer a population’s confidence and trust—a good proxy for citizen-centric governance. The black matchstick arrow indicates how much the Malaysian brain drain has intensified from 2007 to 2020 step-in-step with the eroding relationship between rakyat and the government. The chart also shows where more citizen-centric governments currently are in terms of preserving their most precious capital (right-hand bottom corner on the chart).

What makes these governments remain people-centric?

First of all, there is a startling difference in the level of professionalism of the public administration workforce in more successful countries.

In the world’s classic satiric novel “The Twelve Chairs” by Ilf and Petrov (filmed too), there is mechanic-intellectual Polesov of superficially over-ebullient nature who always speaks big—“three-eighths-inch dies” and other professional jargon. However, whenever entrusted with fixing something, he breaks it completely, disassembles and cannot reassemble, takes off and can’t put it back.

Managing a country, the complex and dynamic system for preserving and developing human lives, is the Profession that demands the highest pedigree of specific knowledge and skills, just like performing brain or heart surgery does. So, naturally, you would not entrust such a task to someone like Polesov—big outside, light inside.

Managing a country is the Profession that should be learnt and trained and equipped with appropriate tools. Therefore, the political leaders (one and all) should be coming from higher education institutions that purposefully, rigorously and holistically prepare them for such a responsible job, rather than from random walks of life.

The country governance goes beyond exceptional fluency in economics, finance and now the frontier technologies. Other conceptually rich disciplines, including the general theory of managing complex social systems, systems thinking, ethics and even basic research methods are essential to make future leaders well-rounded, conceptually powerful, and able to debate on the level of ideas but grounded in reality.

The public administration education scrolls should be obtained with the utmost difficulty and, over time, become an absolute prerequisite for entering the political arena on the higher levels.

At the same time, people should also learn how to discern Polesov’s kin because if you vote for Polesov, then you will get Polesovs everywhere.

Participative governance is the key to citizens-centrism

The conceptually powerful public administrators know well that the feedback loops, especially the negative ones, are central to management. And only the administrator who is generally disinterested in managing the object correctly would ignore such signals.

In the earlier article (“MyRakyat app for the people’s voice”, August 4, 2021), Emir Research discussed the creation of a direct citizen engagement platform powered by 4IR technologies. The platform is to make space for people’s participation in policy design, delivery, implementation, and evaluation continuously rather than only during the elections (and keep the potential mechanics Polesovs, if any, in check).

At the same time, this platform would leave less space for identity-politics rhetoric while paving the way towards affirmative policies based on the needs regardless of ethnicity or religion.

If the parliament is the place to debate and contest the ideas that define the national destiny, then the rakyat’s voices should be welcomed to provide their input directly.

Furthermore, having this kind of platform where people can voice their opinions collectively and be heard should also engender a greater feeling of togetherness among the people and probably start slowly reversing the devastating impact of decades of identity politics.

During the World Economic Forum 2019 discussion, Jacinda Arden explained New Zealand’s Input-Output-Outcome-Impact (IOOI) approach to policymaking under which the ministers must robustly justify how their programs are going to improve the intergenerational wellbeing of society.

While defining the “wellbeing”, Arden said: “We are hoping to embed in actually what the public is asking us for—to address the societal wellbeing of our nation, not just economic wellbeing”.

Arden also shared how the government is continuously conducting their surveys and other research on various indicators for the quality of life beyond GDP, which again brings us to the point of participative governance (above).

IOOI model maps out the transformation of invested resources into the intended outcomes and benefits to many and therefore provides the foundation for solid metrics and implementation control. It is also a safeguard against populist and short-sighted policies.

Similar IOOI frameworks are carried out by other most exemplary governments such as Finland, Norway, Sweden, Denmark, Australia, and others.

In summary, we need to seriously reconceptualise and institutionalise (yesterday) the following structures that powerfully reinforce each other:

what it takes to be vested with the right to administer at least some state segment, not to mention governing a country.

interactivity and rakyat-centricity of public administration.

Otherwise, we will continue losing our national talents and end up having a collective mechanic Polesov not only in place of the capable parliament but everywhere.

Again, only those generally disinterested in the rakyat’s wellbeing and interested in keeping the status quo for ulterior motives would oppose and delay such critical institutional changes. So let us see who can pick up and carry this pennant to transform Malaysia and who oppose it. This is a decisively indicative test for rakyat-centricity.