MAY 3 — Tun Dr Mahathir Mohamad delivered an outstanding, honest and visionary speech on May 9, 2019. He was honest about the challenges they faced politically, he was conservative about their achievements over the first year as PH government and he set a new economic direction to ensure shared prosperity by 2030 for all Malaysians.

He was honest about the PH government’s first year in office. They have only accomplished 39.01 per cent of the 464 initiatives undertaken. But on the issue of addressing corruption and abuse of power they have done well both at institutional reform, recovery of lost funds, charging and brining the former political leaders to trial.

He took the issues of race, religion, political distortion and distractions head on. He acknowledges the shift in public opinion and the blame game that PH has failed to deliver. I would think this is the first time in a public address we have heard so openly the challenge for the Malay-Muslim where a large section feels they are being side-lined in development. There seems to be a strong perception that the PH government is a dominated by Chinese and the DAP.

However a factual check — of the 27 full ministers, 16 or 57 per cent are Malays, four or 14 per cent Indians, three or 11 per cent natives of Sabah and Sarawak and Chinese are only five or 18 per cent. So if one took the term Bumiputras then 68 per cent under them. So this political contestation has nothing to do with facts but all about political perceptions.

The role of the PM and his department has been downsized so as to ensure that the PM is not too powerful holding the office of PM and Finance. In this context too the setting up of the Economic Affairs Ministry does focus a lot of the Malay agenda institutions taking it way from the Finance minister.

However these facts are not significant as the narrative — a loss for Umno is being viewed as a loss for Malays. Another major aspect of ministerial allocation in the PH government is that it is equally shared by all the four political parties so as to ensure no one party dominates in the decision making. This was different in the BN and we know who dominated all the positions although it was a coalition government.

However, the speech of Tun Dr M which co clearly identified the critical issues and his call for political leaders to stop this distortion of politics of race and religion, fell short of specific institutional reform which was a thrust in the PH Manifesto and urgently needed.

There is a need to introduce the hate speech legislation, as well as establish a mediation commission as recommended by the National Unity Consultative Council (NUCC). Strengthening national unity, social cohesion and harmony is essential and this thrust as central to all the delivery agencies as well as through an independent National Unity commission as previously recommended. This must also include an independent media council.

He set the agenda for the 12th (2021-2025) and 13th Malaysia Plans (2026-2030) theme thrust — a focus on Shared Prosperity is significant. Prosperity can be understood as more than just high income including social wellbeing. It is ensuring that in the economic growth we will experience, a fair and just equitability share for all the communities so as to ensure that no one is left behind.

It is significant that in this shared prosperity the disaggregated indicators of class, race, geographical location is specifically highlighted but gender and age was not included. Women are among the poorest as well as often unemployment and underachievement are among the youth as well as with the aging population without social protection, they too are vulnerable and in danger of being marginalised or left behind.

The SDGs which Malaysia adopted has a better disaggregated measurement in SDG 10:2 “age, sex, disability, race, ethnicity, origin, religion or economic or other status.” The shared prosperity agenda must address these concerns too.

Also positive that there is a major departure with measurement of national growth not just by Gross Domestic Product (GDP) indicators but also human wellbeing.

The minute Tun mentioned the seven thrust in his speech on how to achieve this shared prosperity by 2030, I remember his speech when he tabled the Mid Term Review of the Eleventh Malaysia plan on Oct 18, 2018. This was just six months ago and there he highlighted six thrust. It is important to note what is similar and what is different in this new thrust. What is added and what is left out? 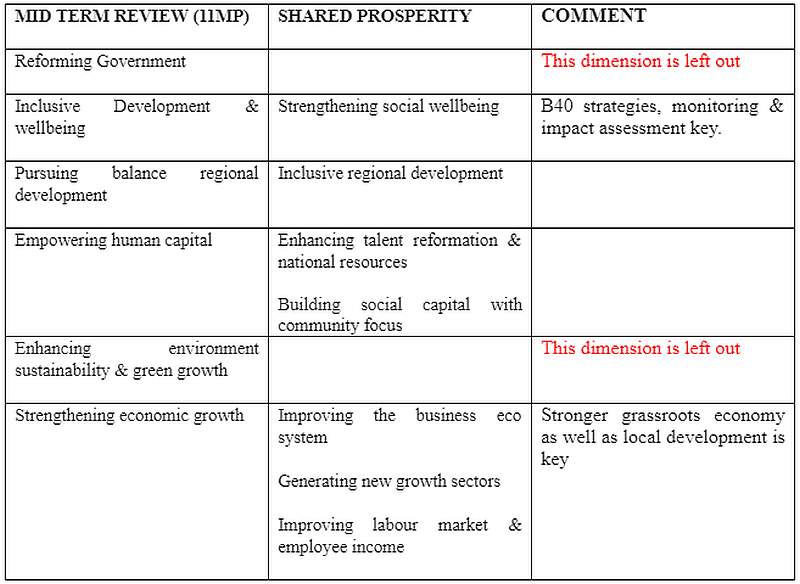 The above table reveals that there is a major shift in the public policy thrust from its original focus as highlighted in Parliament in Oct 2018, where both institutional reform and sustainable development are a major thrust along with economic growth, human development and social wellbeing.

Here I would like to emphasise that a Rights based approach and framework for development is most essential for addressing both rising inequalities as well as discrimination in an open capitalistic and free market system which we are operating within domestically as well as globally.

It takes the two aspects of civil & political rights along with economic, social and cultural rights to ensure shared prosperity and inclusive development for all. The development thrust and discourse does not separate these into two half’s. Therefore the PH government is shifting its balanced public policy thrust towards an older model which will create greater inequality among classes, races and regions.

Popular though is that we need development but not human rights and institutional reform. What the people want are bread and butter issues such as inflation, cost of living and inequalities. Yes, their concerns are right but our solution cannot just focus on building the economy and capital markets, it must address the root causes of inequality and discrimination which are structural.

The development thrust especially the Sustainable development goals (SDGs) is a comprehensive and holistic one not a segmented one. It is about empowering and promoting the social, economic and political inclusion of all.

My strong proposal is for government to review the seven and enhance it with two more which is already a major thrust of the Mid Term Review of the 11 MP namely institutional reform and sustainable development. Therefore it will be nine and not seven thrust.

A stronger public policy targeting the informal sector, grassroots economies as well as greater local participation in local development priorities is key to win hearts and minds of all local communities.

There is a need for public policy to have a much stronger SDG language into the development agenda and policies as already done in the 11th Plan. It is imperative that all member of the Cabinet now host discussions with the grassroots on this "shared prosperity" objectives and thrust.

Here is where delivery and implementation is key along with monitoring and impact assessment. If the civil service at the district level and local authority level are not part of the shared prosperity agenda nothing is going to change at the ground. Yes, we would have had a stimulating intellectual discussion at the top but at the bottom even the SDG language has not been popularised what more on a grassroots appreciation of a shared prosperity agenda.

The federal government must ensure greater public discussion and ownership as well as ensure there good bipartisan buy in at the Parliamentary level.

* Prof Datuk Denison Jayasooria is Principal Research Fellow at the Institute of Ethnic Studies (KITA), UKM. He is also co-chair of the Malaysian CSO SDG Alliance.