Huawei Y9s with 48MP camera goes on sale this week for under RM1,000

KUALA LUMPUR, Nov 26 — If you’re looking for an affordable smartphone that’s big on screen, battery and storage, the Huawei Y9s is going on sale in Malaysia this coming Friday and it’s priced under RM1,000.

Unlike their latest flagship device, the Y9s comes with Google apps and service pre-installed. 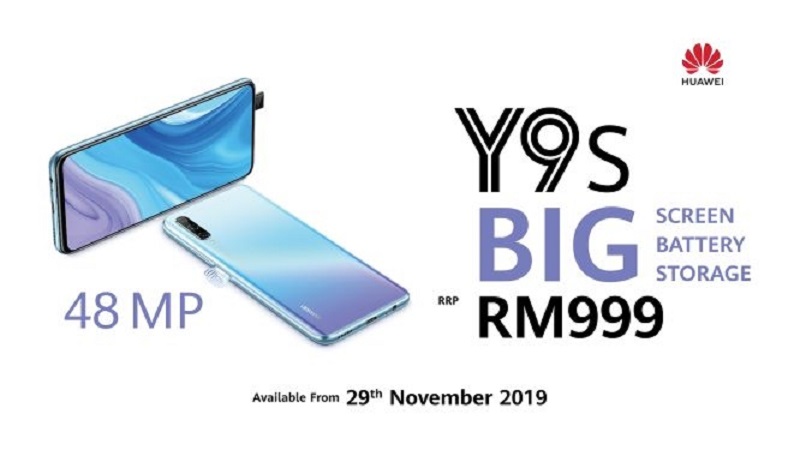 The Y9s will be available at all Huawei Experience Stores, Huawei official retail stores and Huawei online store from the 29th November 2019. It is officially priced at RM999, which is similar to the Honour 9X.

As a launch promo, they are offering a free Huawei Band 4 worth RM139 while stocks last.

The smartphone is available in two colours — Midnight Black and Breathing Crystal.

In terms of specs, the Y9s comes with a 6.59″ Full HD+ display and it runs on a Kirin 710F processor with 6GB of RAM. Onboard, it has 128GB of storage which is expandable via microSD.

For taking pictures, it gets a triple-camera setup that has AI assistance. It has a 48MP main camera, an 8MP ultra-wide-angle camera and a 2MP camera for depth effects. If you need to take a selfie, there’s also a 16MP pop-up front camera.

Powering the device is a 4,000mAh battery which is rated to last up to a full day on a single charge. It supports 10W charging via USB-C and also retained is a 3.5mm headphone jack. The device is identical to the Honour 9X except for the fingerprint sensor which is placed on the side for the Y9s. — SoyaCincau