Datuk Lee Chong Wei, poses with his wife Wong Mew Choo, BAM President Datuk Seri Norza Zakaria and Minister of Youth and Sports Syed Saddiq Syed Abdul Rahman after a news conference to announce his retirement in Putrajaya June 13, 2019. — Reuters pic
Follow us on Instagram, subscribe to our Telegram channel and browser alerts for the latest news you need to know.

BAM president Datuk Seri Mohamad Norza Zakaria said BAM respected the decision made to retire by Chong Wei on his own volition and not for other reasons.

‘’I am with you today with a very mixed emotion. As a badminton lover, I am very sad as I will no longer witness a legend whose style on the badminton court inspired many to watch and play the game.

“Very sad that as a Malaysian, I will no longer have a legend who is always ever dependable and have also inspired others to wear the Jalur Gemilang with pride and honour.

“Very sad as a President of BAM to accept the decision made by our legend today to call it a day on court,” he said at a special media conference by Datuk Lee Chong Wei at the Ministry of Youth and Sports (MYS) today.

At the special media conference today, Chong Wei announced his retirement after 19 years of sweat and toil in the sport of badminton from the age of 10.

Chong Wei explained that the difficult decision was made to prioritise his health.

Commenting further, Mohamad Norza said no words could express his contributions to the nation expecially in the badminton arena which is much loved by the Penang-born athlete.

He said, the three-time silver medalist at the Olympic Games, was the only national player who was always a focus each time he was on court whether at the Olympics festival, World Championship or any major championship aired via television.

He said that he was honoured because he had the opportunity to approach Chong Wei since he became among the leadership of BAM and saw the ups and downs of the legendary player until his name was at the pinnacle of the world stage.

“Despite all his successes and riches, he is still humble, respectful and above all still has the same hunger for success from the day he first started (his career).

“His hunger is not just for his own (success) but also for Malaysian badminton. On this note, I hope Datuk Lee Chong Wei will always be with us to chart the future and to find someone to step into his shoes,” he said.

Mohamad Norza said on behalf of BAM, coaches, players and association staff, he thanked Chong Wei for all the memories and contributions to the country.

“Indeed, the world will miss the ‘King of Super Series’ and Malaysians will miss their national sporting hero and icon. In a generation of truly great players, you are indeed the best,” he added. — Bernama 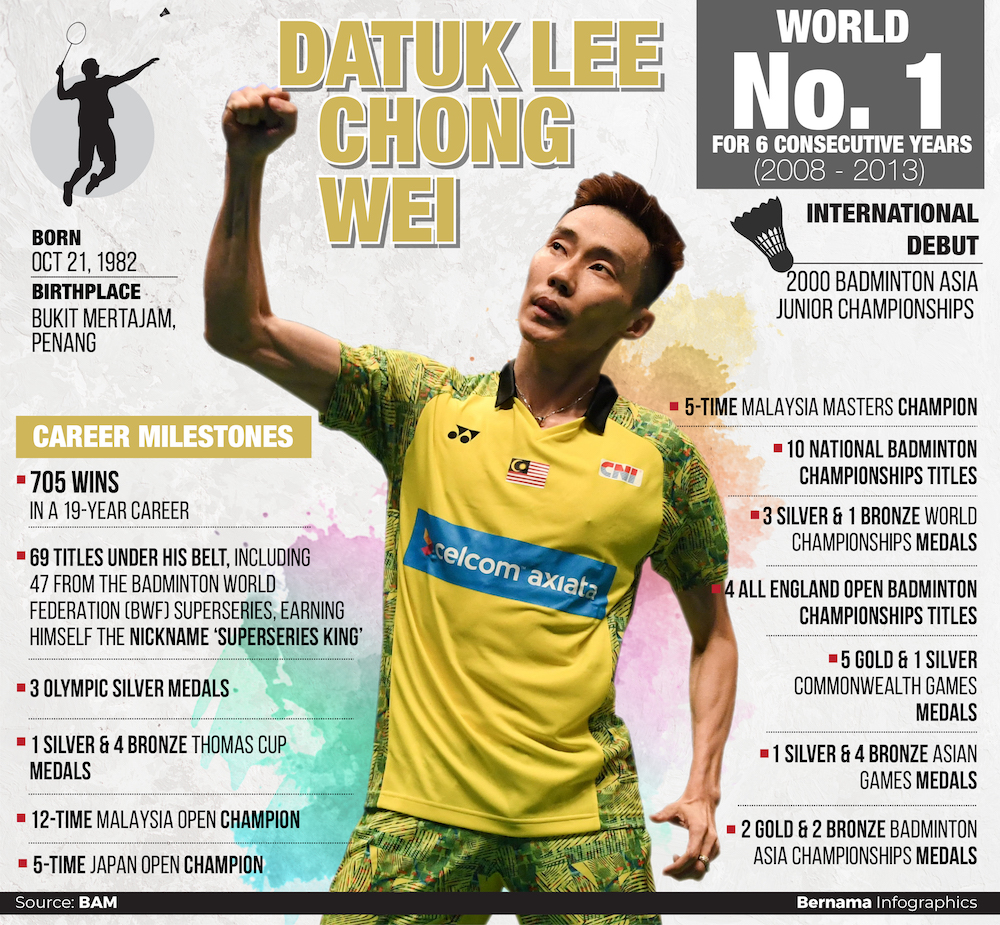