Firefighters on the fourth floor of Block 409, Bedok North Avenue 2 on May 13, 2022. — Singapore Civil Defence Force/Facebook pic
Follow us on Instagram, subscribe to our Telegram channel and browser alerts for the latest news you need to know.

SINGAPORE — Stirred awake this morning by a commotion at the corridor of a Bedok North housing block where he lives, Ms Ng Xin Hui’s father was stunned when he opened the door to see massive flames engulfing the flat across from his and smoke billowing towards him.

His first reaction was to shut the door, Ms Ng, a 24-year-old financial consultant, told TODAY.

“It was super scary and (the fire) felt a lot nearer to us than it was, so we thought we couldn’t escape,” she added, recalling how her father had rushed into her room to wake her up. Her mother, who was showering at the time, quickly got dressed.

A few minutes later, a neighbour managed to bang on their door, urging them to flee. So, the Ng family grabbed their phones and escaped by the staircase, narrowly escaping the flames and pungent smoke that was spreading across the corridor.

Ms Ng lives in a Housing and Development Board flat at Block 409, Bedok North Avenue 2. Two units away from hers lived a family who perished in the blaze.

In response to TODAY’s queries, the police said that they were alerted to a fire at about 6.35am.

A 35-year-old man, a 34-year-old woman and a three-year-old toddler were unconscious when taken to the hospital.

The man and toddler later died from their injuries at the hospital.

Another woman, aged 56, was pronounced dead at the scene by a paramedic from the Singapore Civil Defence Force (SCDF).

In a Facebook post on Friday, SCDF said that it was alerted to a fire at the block at about 6.35am.

A rescue team arrived in six minutes and extinguished the fire with a water jet.

SCDF added that the blaze was linked to the contents of a living room in a flat on the fourth floor and during the operation, firefighters found four unconscious people in the unit in the middle of “a vast accumulation of combustible items”.

Three people, including the toddler, were found in the bedroom. Another person was found in the living room, who was pronounced dead.

Due to the clutter in the bedroom, SCDF said that firefighters had to force their way in. Its emergency medical services crew then performed cardiopulmonary resuscitation on two of the victims. 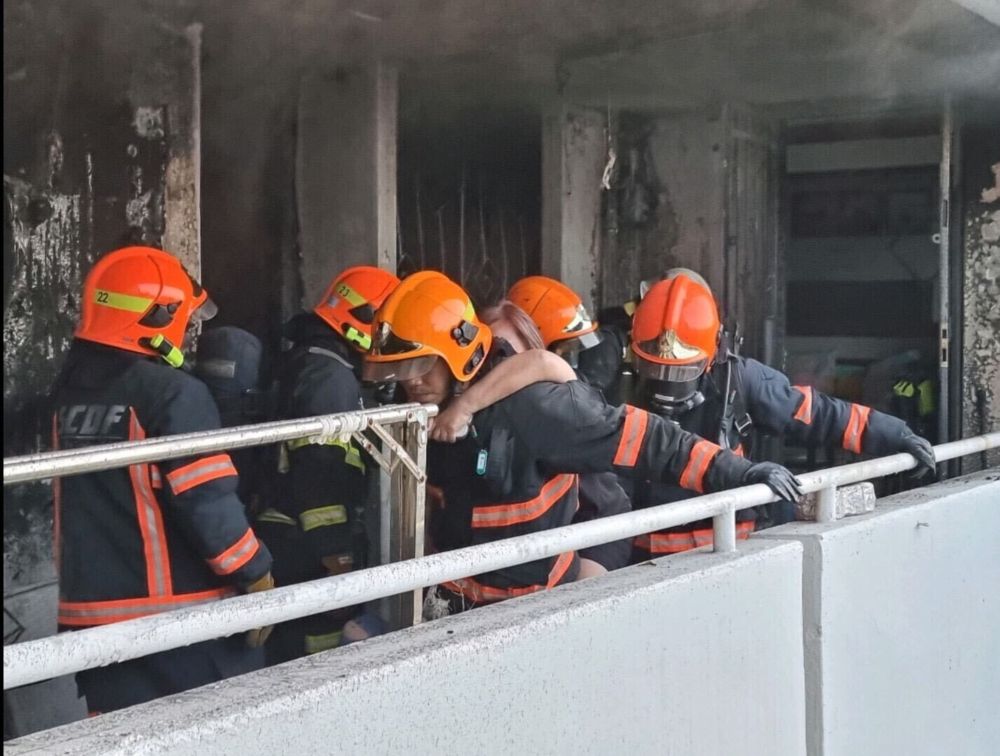 The aftermath of a fire from a flat at the fourth floor of Block 409, Bedok North Avenue 2.

Firefighters also forcibly entered an adjacent flat and rescued another three people, who were assessed for minor injuries and then refused to be taken to the hospital.

A total of 60 residents were evacuated from neighbouring units as a precautionary measure, SCDF said.

Investigations are ongoing into the cause of the fire.

Residents unsure whether to flee or stay

Speaking to TODAY, Ms Ng said that she was not close to the victims’ household, who lived across her home on the same floor. They would often just greet each other at the corridor.

In a video she took of the fire, huge bright orange flames can be seen coming out of a unit on the fourth floor, with thick black smoke billowing across the corridor.

To escape, she and her family had to sprint past the flames to get to the staircase. Had they waited, the fire could have blocked off their emergency exit.

At the time, Ms Ng said she had thought that one should naturally run from where the fire was and it felt “very counter reflex” to run towards a blaze in order to get away.

“Our first thoughts when we saw the fire were if we cannot run, how do we delay it from spreading to us,” she said, adding that the flat on fire was right next to the staircase.

She and her parents are now staying at her sister’s house nearby, she added.

People who went above and beyond to help

Recalling the morning’s commotion, Madam Leow Meng Hong, 55, a retiree living on the sixth floor of the block, said that she was preparing breakfast for her husband when she heard children yelling that there was a fire.

It was the wee hours of the morning and her first instinct was to wake her husband and the other neighbours on the same floor.

“Everyone is usually asleep at that time, so I went around knocking on everyone’s doors. I don’t know everyone on this level but in this situation, we have to wake everyone up because the fire was so huge and hot.”

She was not the only one who sprang into action.

Retiree Koh Kian Thin, 72, who lives on the second floor, said that he knocked on all the doors he could on his floor and those above him, calling on his neighbours to quickly evacuate the block.

He said: “The lights had stopped working, too, so I used a torchlight so that everyone could see the pathways better. The police came shortly after that.”

Other residents told TODAY of neighbours who had gone above and beyond to not just alert them but to ensure that older residents were able to evacuate safely.

Mr Rueven Tan, 35, a photographer, said that a neighbour helped to carry his 77-year-old mother while they were evacuating.

Economists: Singapore wage growth likely to outstrip inflation in 2022, even as food inflation remains a concern