NOVEMBER 25 -- Magnus Carlsen came alive with a stunning win in Game 11 that ensured he retain his title over Viswanathan Anand, the five-time world champion he so easily dethroned a year ago in Chennai, India.

In a position where Carlsen's pressing in yet another Berlin had gone nowhere and when he was drifting into a difficult position after he overlooked Anand's brilliant 23...b5, all it took was a miscue missing 26...Be7 and instead opting for an easily misjudged exchange sacrifice for the younger man to turn the tables around with exactly calculated sharp moves played quickly with absolute confidence.

This time around Anand put up a much better fight in this match but in the end Carlsen proved to be the much better player overall and the final score of 6.5-4.5 was probably a fair reflection of their respective abilities.

Carlsen showed many of his strengths in this match but it was obvious that he is not quite the complete player. Clearly this "rematch" just a year later came a bit too quickly for a young man who was starting to be busy being world champion and he will have to do rather a lot more work to win against a younger rival should that be the case in his next title defence.

In several respects Anand showed how good he was and how superior preparation in the openings could be a winning weapon but age had taken its toll and he also did not seem to believe he was the better player or had a real chance to win. After 8 games into the 12-game match, World Champion Magnus Carlsen enjoyed a minimal one point lead over challenger and former World Champion Viswanathan Anand with the score standing at 4.5-3.5.

Several experts were even saying that everything was still possible as the last few games of a match is different while other pundits were certain that Carlsen was sure to retain his title given Anand's apparent reluctance to take too many risks.

In Game 9, Carlsen had White, knowing a win would all but ensure he would remain world champion and it was again a Berlin after 1 e4. The game was unexpectedly short, once again Anand showing superior preparation and Carlsen quickly deciding to bail out by taking a draw through perpetual check after understanding very correctly to try and continue would have led to a position where Anand had everything to play for.

This handed the initiative back to Anand in the next game where he had White notwithstanding he was a point behind as a win would not only equalise the score but strike a huge psychological blow while giving him the momentum.

Anand as expected played 1 d4 and surprisingly Carlsen opted for the Grunfeld which he had some trouble with in the very first game of the match and it became quite clear that he and his team have not quite solved all the problems with Anand building up an excellent and perhaps more importantly a sharp position but as we had seen so many times in this match, at critical moments the older man chose a safer continuation and once again Carlsen escaped. What was even more worrying was Anand, as he had also done before, did not try very hard, in fact initiating the simplifications to make the draw.

​So the stage was set for the last two games, a win in the penultimate Game 11 with White for Carlsen while a win for Anand would set up a decider in the last game where he would have the White pieces.

Our thanks to www.chess-news.ru, the championship game with notes is given below: 26.Kf3! Perhaps it was this interesting decision that has disordered Anand's analytical mechanism: with so many pieces present, the king calmly goes to the very centre to protect the knight! An illustrative line is, for example, 26...Ne7?! 27.Ke4!.
26...Rdb8. Black was having a really difficult time trying to choose between many lines. The commentators -- Svidler and Nepomniachtchi -- were also jumping from one move to another. Anand was considering 26...Bg7 in order to attack White's construction in the centre, but in this case White has 27.Nh5 Bh8 28.Ke4! (again) with rough equality.
However, 26...Be7! would have posed definite problems for White. The position after 27.Ke4 Bxf6 28.exf6 is the one Vishy meant while thinking of 26...Bg7, although, as he admitted, he wasn't already "thinking very clearly" (probably as well as many other journalists, commentators and translators at the end of the match - AD). Black is somewhat better after 28...Bxd5+ (28...Rd6!? - Anand) 29.cxd5+ Kd6, but the situation isn't looking fatal for White. 27.Ke4! Rb4?! "I don't think his exchange sacrifice was justified" - Carlsen. "I can't understand why I went for the exchange sacrifice... I saw that I could play 27...Rb3 and it's roughly equal: 28.Rb1 Rab8 29.Rxb3 Rxb3 30.Bxa5 Ra3 31.Bxc7 Rxa4" - Anand.
28.Bxb4 cxb4?! It's clear that Anand's idea was to bring the f8-bishop back to life, not only to create the protected passed pawn. However, his central fortification becomes much weaker once the c5-pawn goes aside. After 28...axb4 Black's compensation for the exchange could have been nearly sufficient. 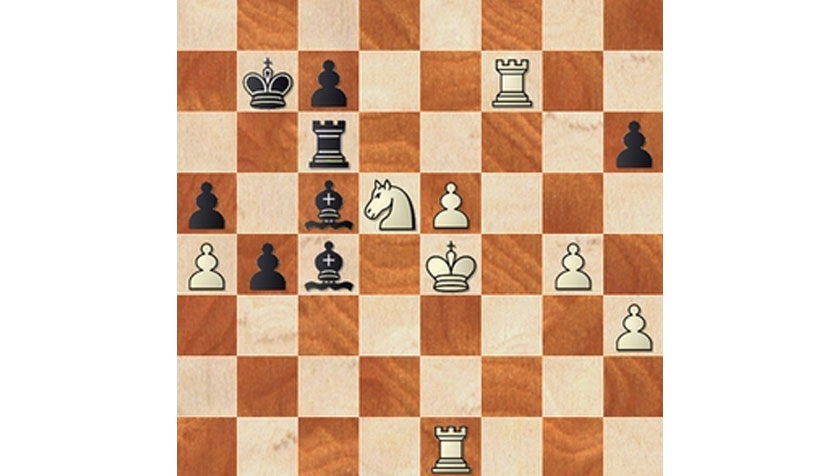